Palestinian workers are forced to seek employment, and accept harsh working conditions, in Israeli settlements, as the Palestinian Authority has failed to create viable alternatives. 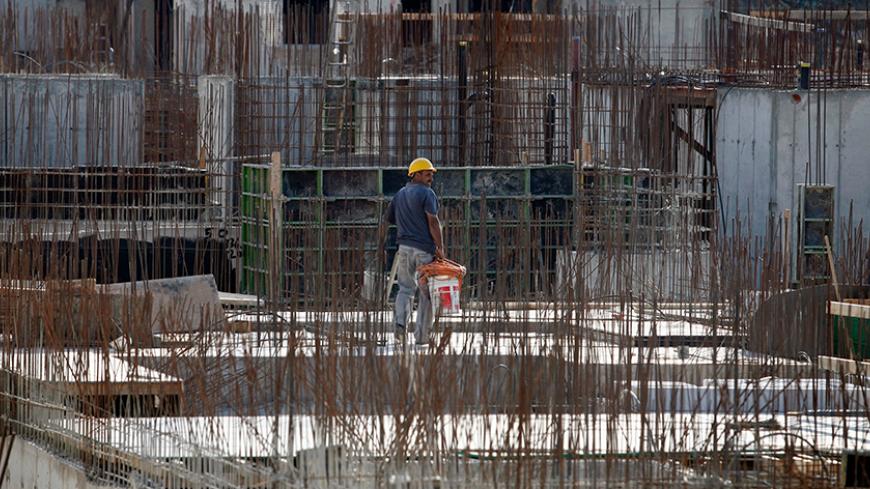 A Palestinian laborer works on a construction site in Gilo, a Jewish settlement that Israel erected on land it captured in the West Bank in the 1967 war, Sept. 27, 2011. - REUTERS/Baz Ratner

RAMALLAH, West Bank — Moussa Alayla, 48, had been working for almost 20 years in agriculture in Israeli settlements in the West Bank before he decided to capitalize on the experience he had gained and establish in 2002 his own company, Gardens of Eden.

Alayla told Al-Monitor that he grows medical herbs in the Jordan Valley area and exports about 600 tons of 23 different types of medical herbs yearly to a number of countries. However, business success stories of former settlement workers such as Alayla are rare.

Anas Mohammed, 25, graduated from one of the colleges in Ramallah two years ago and has been working for five months in the Ariel settlement as a construction worker. He told Al-Monitor that he had to accept work in the settlement because of a lack of job opportunities in the West Bank.

“I get paid 150 shekels [$38.50] per day. However, the working conditions are harsh as I have to wake up every day at 4 a.m. We work long and hard hours. If I find an alternative [job opportunity] in the West Bank, I will quit,” he said.

President Mahmoud Abbas issued decree law no. 4 in 2010, within the framework of the Palestinian Authority's fight against the settlement policy. The law bans and criminalizes any trade of Israeli settlements’ goods and products, and prohibits Palestinians from working in the settlements. In 2010, the Ministry of Labor announced that it had been planning to establish the Dignity Fund to employ the settlement workers in 2011 but failed to do so as such a project required a legislative framework and funds from the general budget, both of which were requirements that could not be fulfilled at the time.

In the first quarter of 2015, the number of workers in Israel and the settlements amounted to 110,000 — 21,000 of whom work in the settlements — according to figures by the Palestinian Central Bureau of Statistics.

For his part, Undersecretary of the Ministry of Labor Nasser Kitami told Al-Monitor, “Creating job opportunities for the settlement workers requires financial resources beyond the PA capabilities — which is suffering from dire financial straits. This is not to mention that the local market is too small." He said, "Israel controls 60% of the West Bank [Area C] and the PA is deprived of its economic resources that hinder the establishment of investment projects."

Kitami added, “Workers are employed in settlements because they need [work].” He called on investors in Palestine to pay competitive salaries and offer incentives to attract workers, and on the Council of Ministers to allocate funds to launch economic projects in order to create job opportunities.

Shahir Saad, head of the Palestinian General Federation of Workers, told Al-Monitor, “Workers are ready to stop working in the settlements but they need an alternative. It is difficult to find job opportunities for about 35,000 workers [who currently work] in the settlements.”

As for the PA’s inability to find solutions to the issue of workers in the settlements, the dean of An-Najah National University, Tariq al-Haj, told Al-Monitor that the authorities have failed to follow up on implementing laws, as the PA is experiencing dire economic times, and as a result has failed to develop its economic sectors. Today, the PA is at a crossroad: It either needs to deal with the ongoing high unemployment figures and its negative consequences, or turn a blind eye to those working in the settlements.

The rate of unemployment in Palestine during the first quarter of 2015 stood at 25.6%, according to the Palestinian Central Bureau of Statistics.

Haj explained that with its current budget, the PA does not have enough funds to develop a productive economic sector, as 85% of the budget is allocated to operational expenses and the remainder is not sufficient for infrastructure development projects.

The PA seeks to open up Arab markets to Palestinian labor as an alternative measure. Abu Shahla said there have been negotiations with Saudi Arabia, Kuwait, the United Arab Emirates and Algeria to send thousands of workers and employees, following Qatar's pledge to offer 20,000 job opportunities. However, the war in Yemen has caused this project to be postponed until further notice.

Abu Shahla also stated that the Ministry of Labor is working on developing vocational training for the Palestinian labor force, in order to increase the likelihood of the value of Palestinian workers to Arab markets depending on the latter’s requirements. According to Abu Shahla, this happened last month in the Gaza Strip with the creation of 30,000 job opportunities in the construction sector. This sector could provide 100,000 jobs if it were to pick up pace.

Palestinian workers in the settlements are at the mercy of Palestinian brokers and Israeli employers, who profit from the arrangement and exploit the workers by paying them a minimum wage. Most workers are forced to work long hours, often under hazardous conditions. According to Saad, employers regularly change the number of working days on the records they keep, to evade taxes, which in turn affects the workers’ end-of-service compensation.

Alayla said, too, that the settlers take advantage of the Palestinians who are in need of work, by pushing them to work long hours for low wages. Some workers fall victim to blackmail as they require work permits.