In an interview with Al-Monitor, Palestinian General Federation of Trade Unions head Sami al-Amasi discusses working conditions in the Gaza Strip, in light of growing poverty and increasing unemployment levels. 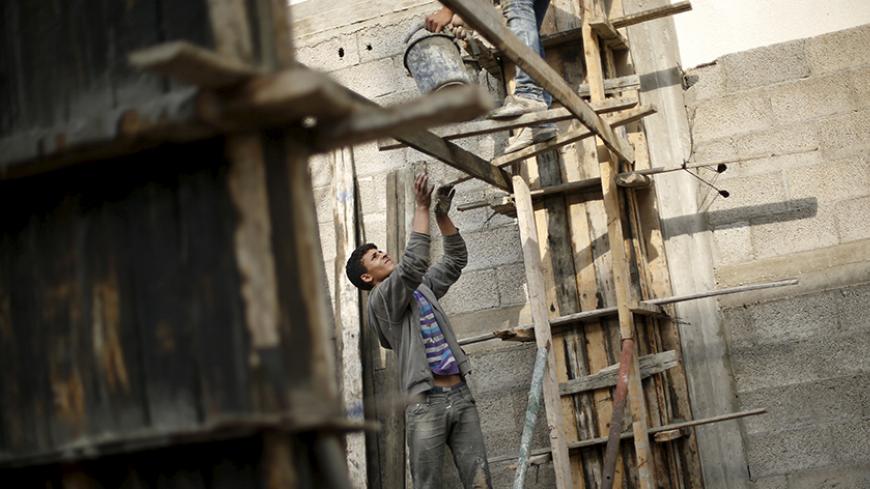 GAZA CITY, Gaza Strip — In 1965, the PLO established the Palestinian General Federation of Trade Unions (PGFTU), an independent labor organization with the mission of defending the interests of the Palestinian working class against potential violations by their employers or the ruling authorities and ensuring workers' rights in accordance with Palestinian Labor Law.

There are approximately 70,000 members in the PGFTU, which consists of 12 unions for workers in the following sectors: hotels, restaurants and tourism; agriculture and industry; petrochemicals; construction; health; municipalities; banking and insurance; public services; transportation; communications and information technology; weaving; and fishing.

Al-Monitor interviewed PGFTU head Sami al-Amasi in his Gaza City office to discuss the situation in the Gaza Strip, where poverty and unemployment rates are growing. He highlighted violations committed by employers against their workers and addressed the federation's main suggested solutions in light of rising unemployment rates.

There are 360,000 Palestinians over age 15, male and female, who work or have worked in the private sector in the Gaza Strip, where the total population is estimated at 1.88 million. The Israeli siege on Gaza since 2007 has negatively affected all aspects of life there. As a result, 220,000 of those 360,000 workers are unemployed, and the unemployment rate for both men and women of working age in the private sector reached 61%. The overall unemployment rate in Gaza, which includes private sector workers, government workers and college graduates, has reached 41%.

Al-Monitor:  What is the exact number of unemployed people in the Gaza Strip? What efforts is the PGFTU making to alleviate their suffering?

Amasi:  There are 220,000 unemployed people out of 360,000 Palestinians of working age in the Gaza Strip [excluding those employed by state institutions], which means that the unemployment rate among in Gaza has reached 61%. The PGFTU has to accomplish a lot of tasks in order to alleviate the suffering. But the situation of the Palestinian unions is quite hard in light of the Palestinian division that erupted in 2007 and made them unable to provide good services for all Gazans of working age. This division resulted in several governments operating at the same time in Palestine; such is the case with Hamas’ rule in the Gaza Strip and the Palestinian Authority’s rule in the West Bank. This is why we do not know who to deal with or who to approach to convey our demands; each party claims the other is responsible.

However, this does not mean that the PGFTU does not provide services to workers. One of the most notable services that this population needs is health insurance, which allows them to receive free treatment in all government health institutions in exchange for paying only 20 shekels a year [$5], which is a very small amount. For their part, workers in government institutions must pay 600 shekels a year [$160] to receive the same service.

Al-Monitor:  Have the reconstruction projects in Gaza, after its destruction in the 2014 Israeli war, not provided hundreds of jobs? How many workers got jobs through these projects? How much is the average wage? Who is funding these projects?

Amasi:  Reconstruction projects are funded by several international bodies and Arab governments in accordance with what was agreed upon at the [Cairo] donor conference for the reconstruction of Gaza, held in October 2014. These bodies include the United Nations and the European Union, while Arab countries such as Kuwait and Qatar provide regular financial grants to support the reconstruction of destroyed houses.

These projects have created jobs for about 30,000 workers, but that number is constantly decreasing due to Israel's failure to allow the entry of enough cement into Gaza; Israel only allows 3,000 tons of cement per day, and this constitutes 15% of Gaza’s daily requirement of cement for reconstruction to proceed at a normal pace. Thus, the continuation of reconstruction works depends on the entry of raw materials, particularly cement.

We have a true problem when it comes to the average worker's wages. The minimum [monthly] wage in the West Bank was set at 1,450 shekels [$386], but in the Gaza Strip, there is no such thing as a minimum wage in light of the deteriorating economic situation and absence of jobs. This is why the local construction companies offer low wages for workers, at 600 shekels a month [$160]. … Unfortunately, there is no authority in Gaza to control this dire situation.

Al-Monitor:  In light of the difficult conditions the unemployed face in Gaza, what effort is the government making to create jobs and develop the skills of unemployed Gazans?

Amasi:  The national consensus government … is not making any real efforts to create jobs in Gaza or to improve the workers’ living conditions. On March 24, the government approved the social security law for workers, but it does not resemble any social security law in any country in the world: There is no health insurance, no old-age insurance, no disability, death and work injury insurance and no maternity insurance, and it does not guarantee any financial provisions for the unemployed.

The government does not spend donor funds to employ those who need jobs. For instance, in March 2015, the government received a grant worth 20 million euros [$22.4 million] provided by the Italian government to find jobs for the unemployed, and the grant was enough to provide temporary jobs for about 100,000 workers. All the unemployed in Gaza were quite happy about this news, but to our shock, the government announced in February 2016 it was providing job opportunities for only 2,500 university graduates. One might wonder where the rest of the grant was spent, although it was originally allocated to provide jobs for the unemployed.

Al-Monitor:  It has been two years since the 2014 Israeli war. What is the status of the efforts aimed at rebuilding industrial facilities that were destroyed during the war?

Amasi:  The war left devastating partial and complete damage of 860 industrial facilities. Their reconstruction process has not begun yet because the citizens’ houses are still being repaired and they are more of a priority. I think that reconstructing the facilities is still far off.

Al-Monitor:  Economic experts in Gaza agree that sending some [unemployed] Palestinians to work abroad is one of the most effective solutions to curb unemployment. Are efforts being deployed in this context? What is impeding exporting Palestinian labor abroad? Are there imminent plans to resolve the unemployment crisis?

Amasi:  Unemployment cannot be solved without exporting labor abroad. The Gaza Strip cannot employ 360,000 people. There were governmental efforts in 2015 to send hundreds of unemployed people from the Gaza Strip abroad, especially to Qatar and Kuwait. But, unfortunately, nobody was sent due to the political division between Gaza and the West Bank. With the current division, there are no prospects of sending [this population] abroad.

Al-Monitor:  Locally, those employed in the private sector are accusing employers of committing harsh violations against them and making their lives tragic. Tell us about these violations. What is the role of the PGFTU in protecting these workers from violations?

Amasi:  There are huge violations from employers against their employees. For instance, employers refuse to sign any contract with the employee to deprive them of their end-of-service rights such as financial dues. Moreover, wages are low, and workers aren’t paid overtime. For instance, workers in bakeries work for 12 continuous hours daily for 30 shekels [$8] a day. This is aginst the Palestinian Labor Law.

But the PGFTU is also facing problems in ensuring the rights of employees, as the employee is afraid of filing a complaint against his boss for fear of being fired and not finding another job. Moreover, trial procedures in Gaza take a long time and could last up to five years to issue a final verdict in a certain case. All this time, the employee must pay his lawyers, and this is costly. Under this tough situation and in the absence of a judicial body, the PGFTU can only do so much. We often resort to friendly solutions between the employees and employers to grant the employee part of their rights and financial payment on condition of forgetting the other rights. In 2015, the PGFTU helped resolve around 160 cases between bosses and employees amicably.

Al-Monitor:  Do you think laws in the Gaza Strip guarantee the rights of workers and protect their families when they lose their job or are injured during work hours? What can be improved?

Amasi:  The real problem with these laws is that they are mere talk and are not effectively implemented. If a worker files a lawsuit before the court against his employer, it takes ages to be examined due to the long trial procedures. For instance, if a worker dies after being injured at work, the law guarantees his family the salary of 3,650 days, which means around $40,000-$45,000 that is paid by the employer of the deceased worker, as per the Labor Law. But, nobody abides by this law, with the long procedures in the state’s courts. We need a law to establish special labor courts to decide on labor issues, expedite trial proceedings and guarantee all workers their rights. We have been calling on the Palestinian Legislative Council to issue this law, but it has not responded.

Al-Monitor:  You have been heading the PGFTU since 2010. No syndical elections have taken place ever since. Why is that? Are you thinking of running in the elections if they are held? Are there any plans to hold such elections?

Amasi:  The division between Gaza and the West Bank has impeded the syndical elections since 2010. But internal elections for the unions were held in June 2016. I believe holding unified elections to vote for a new union board requires a political decision that all Palestinian factions agree on. About my candidacy, if the elections take place, it is too soon to tell. I have not provided my stance yet because the situation and the problems with labor have weakened my enthusiasm for another round of elections. But I will provide a clear stance when the elections are approved.