Difficult living conditions inside the Gaza Strip have pushed citizens to risk their lives to emigrate in search of work even without the proper Israeli permits. 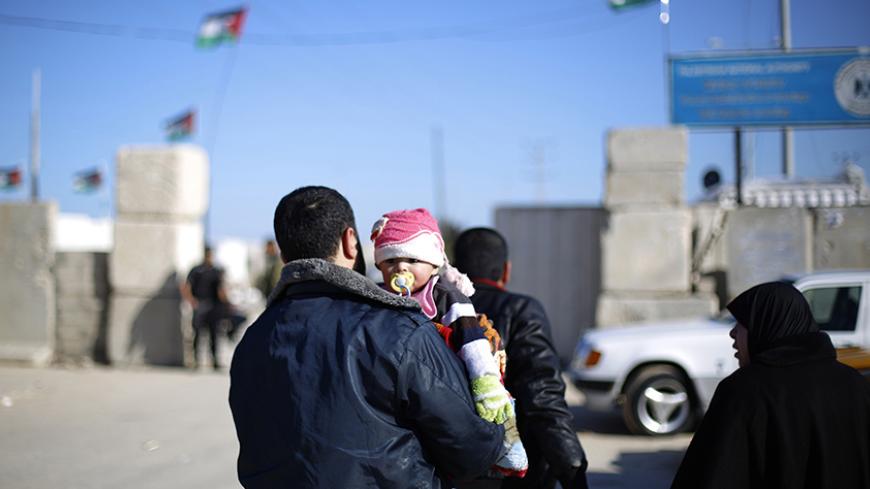 A Palestinian man holds a child near the Erez crossing in Beit Hanun in the north of the Gaza Strip, Jan. 13, 2015. - AFP/Getty Images/Mohammed Abed

JABALIYA, Gaza Strip — Gazan workers are still trying to look for new work opportunities to relieve the unemployment crisis and the dire economic situation as a result of the Israeli blockade that has been going on for eight years. This time, however, their search for work is inside Israel and in a legal way. Some Palestinian workers have entered Israel through permits granted only to traders.

Officials with the Palestinian General Federation of Trade Unions (PGFTU) told Al-Monitor that nearly 200,000 unemployed workers in Gaza, following last summer’s war, pinned their hopes on obtaining work permits to enter Israel after Israel issued a statement a month after the war about providing humanitarian opportunities for Gazans. This included permits for 5,000 workers. However, these dreams faded away as the Israeli authorities allowed the issuance of “work” permits for traders only.

Mohammed (a pseudonym), 39, worked in construction projects inside Israel for four years before the outbreak of the second intifada in 2000, when Israel decided to ban a large number of Gazan workers from entering for work.

“Before the second intifada, I worked inside Israel — until the Israeli authorities banned Gazan workers from entering their territories. Back then, I used to work in construction projects, plumbing, water systems installation and sanitation. My monthly paycheck used to be 3,000 shekels ($768), which was the equivalent to a government employee’s one-month salary back then,” he said.

Mohammed, a father of nine living in the area of Izbet Abed Rabbo, east of Jabaliya refugee camp in the northern Gaza Strip, spoke to Al-Monitor about his new experience as a worker inside Israel.

About two months ago, he managed to obtain a trader permit and entered Israeli territory to work in the plumbing field.

“I recently established a small store in Gaza to obtain an official commercial registration from the concerned government parties, so that I can work in the capacity of a trader and therefore have a trader permit issued in my name, after having submitted all my papers to the Authority of Civil Affairs, which coordinates with the Israeli side,” he said.

Mohammed refused to disclose too many details of his work in Israel and how he obtained the permit. He only talked about an Israeli woman who provided him with the work opportunity. She was the one responsible for his previous work along with other workers before the second intifada.

Another Gazan worker spoke to Al-Monitor on condition of anonymity. “There are many workers in Gaza who did the same as [Mohammed] to obtain permits to enter Israel. After satisfying the requirements for obtaining a license to practice a trade from the municipality, they submit a lease contract or a title deed and 1,000 shekels [$250] to the Ministry of Economy to obtain an individual or a company commercial registration. They can also add one or two workers to their company to get the trader permit,” he said.

The director general of the business registration department at the local Ministry of Economy, Abdullah Abu Rouwaida, told Al-Monitor, “We issue licenses to practice trade to individuals and companies after they submit the required documents, such as licenses to do trade, from the local municipalities. They obtain these licenses after submitting a request and paying an amount of $250 to the municipalities.”

He said the number of trade licenses that are being issued has increased. "The number of commercial registrations issued to individuals and companies is [normally] around 70 to 80 per month. But in [March], the number of registrations reached 350, as workers are trying hard to obtain trade permits to work inside Israel.”

After completing all the procedures, these workers start to communicate again with their former employers, who are Israelis working on linking Palestinian workers to the labor market in Israel, each according to their skills and careers.

Al-Monitor also met with workers in the northern, central and southern Gaza Strip who managed to obtain trader permits after submitting their applications, which included commercial registration, and a letter from the Israeli employer to the Civil Affairs Authority to obtain the necessary permits from the Israeli side.

A source in the Civil Affairs Authority denied claims that permits are being granted to workers. He told Al-Monitor on condition of anonymity that the permits are being issued for traders only, and for commercial purposes. The source also said that the Palestinian side is waiting for Israel to fulfill its promises to offer opportunities to Gazan workers, and that the talks between the two sides are still ongoing.

Since the outbreak of the second intifada, the number of Gazan workers in Israel declined from 16.5% of the total workforce in the Gaza Strip in 1999 to 12.7% in 2000. This percentage continued to decline until Israel completely banned workers from entering its territories after imposing the blockade following Hamas’ victory in the 2006 elections.

“Who in Gaza does not think of leaving? Everyone wants to leave, be they college students, or even those who have their own business here. They all wish to leave because of the economic conditions hindering their success in life,” Mohammed said.

In light of the blockade, Gazans have been facing more difficult options to find work. Some worked in the smuggling tunnels at the Egyptian border before they were demolished as part of the Egyptian army’s campaign to create a buffer zone since June 2013. Others delved into the dangers of illegal immigration across the Mediterranean after last summer's war, while many tried to cross the eastern fence in the Gaza Strip to work in Israel, before being arrested by the Israeli army.

A few days ago, Al-Monitor visited Mohammed’s family again to obtain further information on his work, but it turned out that he had left for Israel after receiving another permit.

“My husband decided to stay longer in Israel for work as it is expensive to commute daily from Gaza to Israel, especially as two of our children are college students and we need to pay for their tuition. This is not to mention other expenses. My husband could not find any job in Gaza that would meet our needs. Those who can find work here for 20 shekels ($5) a day are lucky,” his wife told Al-Monitor.

For his part, the head of the PGFTU, Sami al-Omsy, told Al-Monitor, “According to our communications with the Civil Affairs Authority, we found out that about 1,000 Gazan workers have obtained trader permits since the beginning of 2015 to work inside Israel.”

“Since 2000, 120,000 Gazan workers stopped working inside Israel through the use of worker permits. Some of them continued to obtain work permits until 2002, but it all stopped in 2006. Since then and up until recently, permits would only be issued to major traders. But the [current] increasing number of trade permits may be part of Israeli measures that the workers took advantage of to find a job inside Israel,” he said.

Osmy added, "After the last war, the number of unemployed workers rose from 170,000 to 200,000 due to the bombing of factories, agricultural lands and the slow reconstruction process.”

In light of the deteriorating economic situation and the failure of the consensus government to improve any of the Gazans’ living conditions after last summer's war, Gazans continue to risk their lives to find better opportunities. Most of them face the risk of being arrested inside Israel, as they are not working using trader permits.