Thousands of unemployed Gazans are flocking to the offices of the Chambers of Commerce to submit their papers to obtain a permit to work inside Israel, following reports that Israel has agreed to grant 2,600 commercial permits to Gaza residents. 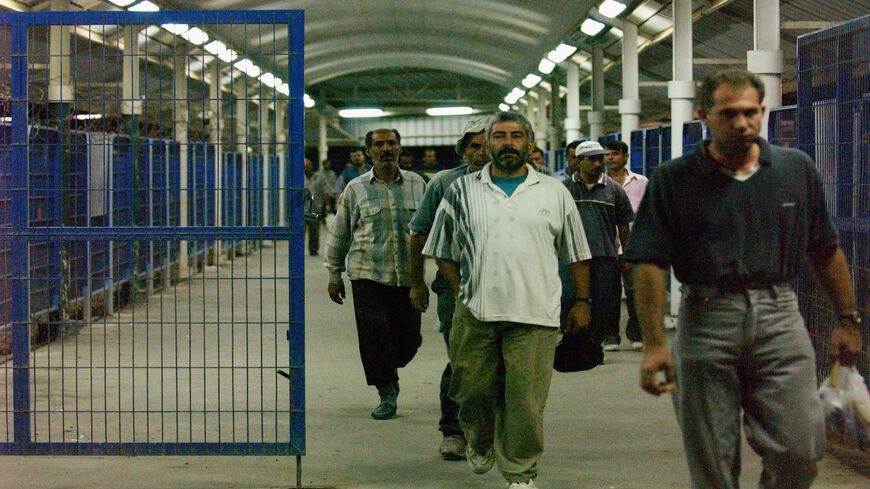 GAZA CITY, Gaza Strip — Thousands of unemployed Palestinians flocked to the offices of the Chamber of Commerce in the five governorates in the Gaza Strip to submit their identification papers in order to obtain a permit to work inside Israel.

On Oct. 5, several Chamber of Commerce offices announced that they had started receiving applications for work permits in Israel.

Video footage shows unemployed Gazans even sleeping on the sidewalks in front of the offices of the Chamber of Commerce in order to get a turn, since Israel is only providing a limited number of permits to Gaza residents.

A source in the General Authority of Civil Affairs in Gaza told Al-Monitor that Israel recently issued permits to 2,600 new merchants from the Gaza Strip, bringing the total number of permits granted to Gaza residents in the past three years to 9,600.

The source explained that most of these permits are granted to workers with jobs in the Gaza envelope, in the agriculture and construction sectors, under the guise of merchants.

Up until the outbreak of Al-Aqsa Intifada in 2000 and until 2002, the total number of Palestinian workers inside Israel stood at 120,000; but they were prevented from entering Israel due to the security situation back then.

The overcrowding in front of the offices of the Chamber of Commerce reflects the difficult situation of Gazans in light of the siege Israel has been imposing on the enclave since Hamas won the legislative elections in 2006. It also reveals their living conditions and economic suffering after the repeated wars and military battles that have been erupting between Israel and Palestinian factions for 15 years, also straining Gaza’s economy. Consequently, the unemployment rate and poverty levels hit record numbers.

The latest statistics issued by the Palestinian Central Bureau of Statistics in May showed that the number of unemployed in the Gaza Strip reached 211,300, with an unemployment rate of 46%.

Wael al-Aour, member of the board of directors in the Gaza governorate Chamber of Commerce and Industry, told Al-Monitor that a small number of those who submitted their papers will obtain a permit to work in Israel as merchants.

He said that the Gaza governorate Chamber of Commerce and Industry alone had received, in a matter of hours, over 10,000 requests for work permits, noting that only 800 of them would be selected.

He said they were shocked by the turnout given the limited number of permits.

He explained that the unemployed were allowed this time to submit their requests at the Chamber of Commerce, instead of asking for a commercial register from government offices, in order to avoid them being classified as merchants in government records. This classification, Aour said, would prevent the unemployed from receiving food and cash aid provided by international and local organizations.

He noted that in the past, a commercial register was required for every merchant or an unemployed person who wanted to obtain a work permit in Israel, and was thus classified in government records as a merchant and not unemployed — even if they fail to get a permit to work in Israel, they would no longer be eligible for aid.

Sami al-Amasi, head of the Palestinian General Federation of Trade Unions, accused the Chamber of Commerce offices of exploiting the need of the unemployed by promoting reports that there is a large number of work permits available.

Israel had agreed to grant 5,000 permits to Gaza merchants to enter Israel in November 2018, as part of the understandings reached between Hamas and Israel and aimed at easing tension between the two sides.

Mohammed al-Rai, 37, from the Deir el-Balah governorate, told Al-Monitor that the difficult living conditions in the Gaza Strip were the main reason he requested a work permit, although he is aware he might lose the financial aid he receives from the Ministry of Social Affairs and United Nations Relief and Works Agency for Palestine Refugees in the Near East for being unemployed.

“Either my children, my wife and I live in dignity thanks to a salary that I receive at the end of each month, or I do not want any assistance from any party,” he said.

The frustration and despair of Gazans prompted some of them to sell their furniture to get the money needed to obtain a commercial register, which is required to work in Israel.

Adel Mansour, 44, a resident of Gaza City, told Al-Monitor that he sold his bedroom furniture for 530 Israeli shekels ($164) to get a commercial register.

Hamed Jad, an economist who writes for the Palestinian Al-Ayyam newspaper, told Al-Monitor that the baffling scenes of thousands of unemployed people, most of whom are young people, gathered in front of the Chamber of Commerce offices to get a work permit, reflect the unprecedented rates of unemployment in Gaza.

Jad stressed that obtaining a work permit in Israel carries a great risk for the applicant and their family, especially since they may be deprived of aid. Also, he said, they are not entitled to financial compensation from the General Organization of Workers in Israel should they suffer a work injury because they enter Israel with a permit as a merchant, and not as a worker.