How serious is Israel about allowing return of Gaza workers?

Israel's decision to allow workers from the Gaza Strip to hold jobs in adjacent towns is a positive step that, if implemented, will improve the economic situation in Gaza. 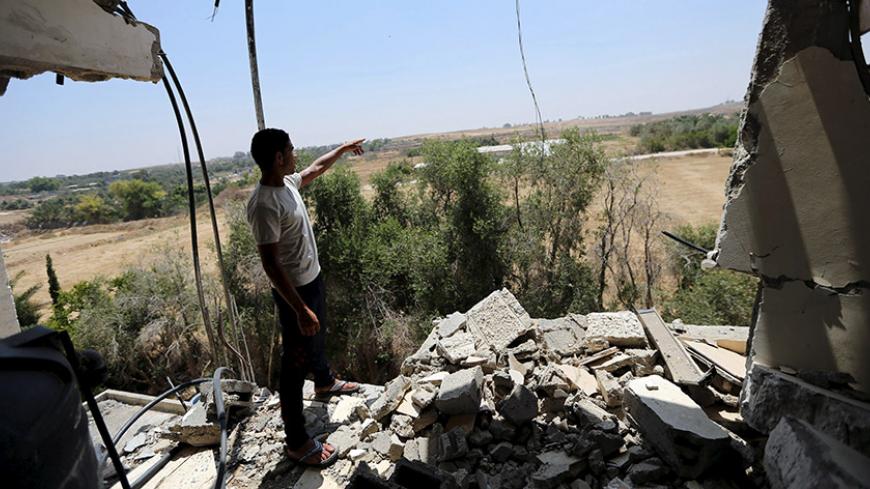 A Palestinian man points to the Israeli border as he stands in the remains of a destroyed house, near the border between central Gaza Strip and Israel, July 5, 2015. - REUTERS/Ibraheem Abu Mustafa

GAZA CITY, Gaza Strip — Israel announced Dec. 3 its willingness to grant hundreds of work permits to Palestinian laborers from the Gaza Strip to work in the fields of construction, agriculture and services. This would lead to the recovery of the economic situation in the Gaza Strip after permits stopped being issued with the outbreak of the second, Al-Aqsa intifada on Sept. 27, 2000.

Gazan workers who were previously employed in Israel are greatly suffering from a high unemployment rate and few job opportunities, and most of its laborers have large families to provide for and just rely on the aid provided by the Ministry of Social Affairs, which ranges from 800 to 1,600 shekels ($208 to $416) every three months — depending on the number of family members.

Shokran Mohammad, 49, was very happy to hear the work permit issuance news, which gave him hope that he will overcome the poverty and unemployment he is suffering from.

He said he worked in Israel in the field of construction and contracting from 1993 to 2000, before Israel closed the crossings and stopped issuing work permits for Palestinian workers due to the intifada. He pointed out that ever since, he has been working intermittently in Gaza for a maximum period of two years, and he gets paid very little compared with what he used to earn per month during his work in Israel.

Prior to the decision, hundreds of Palestinian workers had demonstrated Dec. 2 at the entrance of a Palestinian civil liaison center located in front of the Erez crossing to demand they be allowed to work inside Israel. The number of unemployed people in the Gaza Strip amounts to 193,000 amid a 42% unemployment rate during the fourth quarter of 2015, as per a report by the Palestinian Central Bureau of Statistics published Feb. 25.

Mohammed Makadmeh, the media general manager at the General Authority for Civil Affairs in Gaza, told Al-Monitor, “We have not been informed of any official decision whereby Palestinian workers from Gaza would be allowed to enter the adjacent towns and work there. This is a unilateral Israeli step, and we will take all the necessary measures in the event we are informed.”

Nasser Kitami, the undersecretary of the Ramallah Palestinian Ministry of Labor, told Al-Monitor, “This is a [step] related to the Israelis, and it would be a unilateral move. We have not been officially informed of any decision.”

Meanwhile, the Palestinian Al-Eqtisadiah newspaper reported Dec. 12 that there are undeclared negotiations taking place between the Israeli and Palestinian sides under UN auspices to start restoring labor activity between Gaza and the Israeli side. The newspaper added that the final discussions are focused on the initial number of Gazan workers to be allowed in Israel.

Sami al-Amasi, the chairman of the Palestinian General Federation of Trade Unions, told Al-Monitor, “Israel is seeking to improve its image before the international community as it announces in the media that it is trying to ease the burden of the Gaza Strip, but the reality is quite different. Israel announced in November 2014 that 8,000 workers from Gaza would be allowed to work in the towns surrounding the Gaza Strip, but it eventually only allowed dozens of workers to enter the towns, and those who made it had to show trade dealer's permits, not worker's permits.”

Israel grants permits to traders to facilitate imports from Israel and abroad, which gives traders greater freedom of movement between Gaza and Israel. But Israel keeps shrinking and withdrawing these permits from the merchants, all the while preventing many merchants from traveling.

Amasi questioned Israel's intentions to improve the relationship with the Gaza Strip and allow laborers to work within towns. “We are suspicious about the issue of allowing workers to enter Israel despite Israeli claims about alleviating the suffering of Gaza. [If this is its true intention], then let it open the crossings and allow the entry of banned timber, cement and plastic. Beyond the economic dimensions, the issue has other security dimensions.”

Each town around the Gaza Strip has a mayor who manages the town's affairs and discusses with the Israeli government the problems and challenges faced by the towns.

There are several targets that Israel is seeking to achieve by allowing the entry of workers from the Gaza Strip, according to writer and political analyst Hossam al-Dojni, who works at the Palestinian Foreign Ministry in Gaza.

“Israel is seeking to prevent an imminent explosion in the Gaza Strip and the outbreak of a new war due to the difficult economic conditions experienced by the Gazans. It also wants to exploit the skills of Palestinian laborers by allowing them to work inside the [towns] that are adjacent to Gaza,” he told Al-Monitor.

But Israel’s most important goal, said Dojni, is “related to security calculations as Israel is seeking to obtain information about the resistance in Gaza, the nature of life and the psychological status of the population by blackmailing workers at the Erez crossing before allowing them to pass to work in Israel.”

For his part, Moin Rajab, a professor of economics at Al-Azhar University in Gaza City, told Al-Monitor that if the decision is applied, it will have a positive impact on the economic situation in the Gaza Strip given the high wages that Palestinian workers receive in Israel compared with the low wages they receive in Gaza. Also, the unemployment rate in Gaza will witness a decline.”

Rajab added, “The Paris Protocol on economic relations, which was concluded in 1994, established a link between the two Palestinian and Israeli economies and stipulated offering employment facilities to Palestinian laborers to work in Israel. The protocol also provided for the freedom of trade at the crossings and the entry of all the necessary building and project materials to the Palestinian Authority areas in Gaza and the West Bank. While Israel completely controls the articles of the agreement, it only allows its implementation on a whim and in very specific cases.”

Israel's decision to allow the entry of workers from the Gaza Strip remains a positive step that will improve the economic situation in Gaza, provided it is swiftly applied to alleviate the difficult political and economic conditions plaguing the Gaza Strip.