Israel deliberately expelled Gazan workers from inside Israeli cities and closed the Erez crossing with the Gaza Strip, citing the tense security and military situation with the Palestinian factions in the besieged enclave. 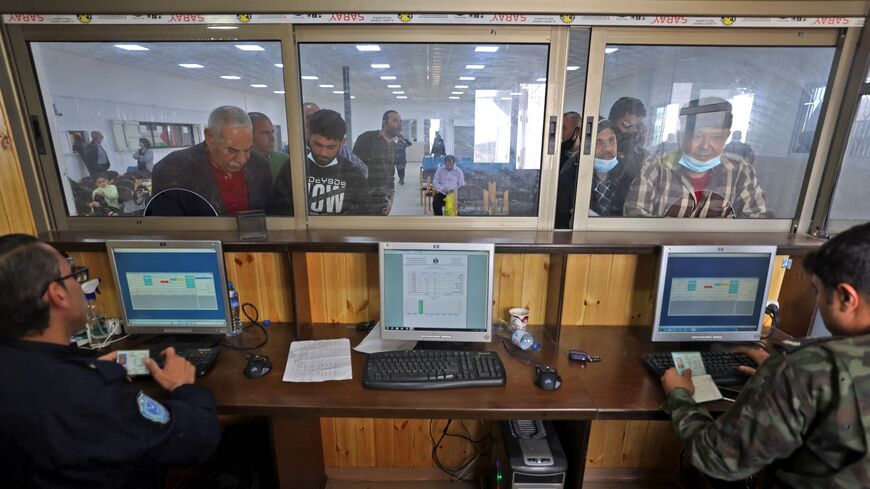 Palestinian officers check documents of workers waiting to reach Israel through the Erez crossing following its reopening in Beit Hanun in the northern Gaza Strip on April 26, 2022. - MOHAMMED ABED/AFP via Getty Images

The Israeli army is expelling Gazan residents working inside Israeli cities and denying them access across the Erez/Beit Hanoun crossing in the northern Gaza Strip. In justification of its measures, Israel is invoking the tense security and military situations with the Palestinian factions in the Gaza Strip.

In the wake of the Elad deadly attack in early May, a large number of Gazan workers were expelled from their work sites in Israel.

On May 5, two Palestinians killed three Israelis and wounded several others using an ax in an attack inside a park in the town of Elad east of Tel Aviv. Israel accused Hamas' leader in Gaza, Yahya Sinwar, of inciting this type of operation.

The issue of Gazans working inside Israel is a sensitive one that has always been associated with the developments in the current security situation between Gaza and Israel. After the last war on the Gaza Strip in May 2021, Israel allowed a limited number of Gaza residents to work inside Israel in a move it said aimed to improve Palestinians’ livelihood and reduce tensions by easing economic restrictions on Gaza. The move, which included the issuance of 3,000 additional working permits, came as part of the understandings brokered by international mediation between the two sides.

In March, Israel announced raising the number of permits for Gazan workers to 12,000 to work in various professions inside Israel. Gazans who work inside Israel earn more than double the wages offered inside the besieged enclave, and thus they help keep the Gazan economy afloat amid soaring unemployment rates.

However, Palestinian workers inside Israel face systemic labor rights violations and ongoing threats of cutting off their source of livelihood based on field developments. Meanwhile, they also face repeated attacks by Israeli army forces and settlers.

Israel fears Palestinian workers could be recruited by resistance factions to carry out attacks against Israeli civilians inside its territory. The Israeli concerns have recently escalated in light of the recent security events inside Israel and the Palestinian territories.

Mustafa Darwish, 53, a construction worker from Gaza who works in the Israeli city of Ramla, recounted to Al-Monitor how the Israeli police arrested him a few days ago without any prior notice along with four other workers from inside their worksite.

He said the police took them to the Erez crossing and then back to the Gaza Strip under the pretext that their presence posed a danger to Israeli civilians. Israeli authorities, however, did not strip them of their work permits, he noted.

Darwish pointed out that the Israeli army and civilians are mistreating Gaza workers and that the daily wages these workers now receive have dropped compared to several years ago. “Some Israeli project owners are now preferring foreign workers, especially Ukrainians who immigrated to Israel [after the Russian war began],” he said.

“We are living in a state of uncertainty. Since Israel allowed the entry of Gaza workers nearly five months ago, it has been repeatedly denying them entry across the crossing amid the rocket attacks from Gaza and the ongoing operations inside Israel. We have also been accused of being manipulated by the factions in Gaza,” he lamented.

Wajdi Salem, 47, an agricultural worker in one of the Israeli settlements in the Gaza envelope, told Al-Monitor, “The Israeli army recently deported me to Gaza. When I inquired why, I was told that the situation was dangerous.”

He noted, “Gaza residents working in Israel, in general, are not affiliated with any political or military faction. They are subject to a background check before they are granted work permits. But Israel uses us as a bargaining chip with the resistance factions to ensure calm with Gaza.”

After it reopened the Erez crossing on May 15, two weeks after it was closed in light of the tensions in the Palestinian territories, Israel denied Salem entry, citing security reasons and without elaborating. “This is the situation of hundreds of workers who are losing their main source of livelihood when Israel temporarily denies them entry,” he said.

Meanwhile, the head of the Palestinian General Federation of Trade Unions, Sami al-Amasi, told Al-Monitor that Israel’s grant of work permits to a segment of Gaza residents is not sufficient to revive the deteriorating economic situation inside Gaza. Out of 70,000 unemployed Gaza workers, 12,000 are recently granted work permits inside Israel, he noted.

“Israel is not interested in reviving the crippled economic situation in Gaza. The grant of work permits is more of a political tool than a humanitarian move, especially since Israel deprives these workers of their labor and legal rights. They are being granted permits under the category of merchant or for economic needs,” he said.

Amasi added that Israel's repeated harassment of these workers through the repeated expulsion and closure of the Erez crossing exacerbated their already dire living conditions. “Israel links the fate of a large segment of the residents of Gaza to the state of security and field stability. It is using these workers to bend the arm of the resistance to maintain the state of calm and nonresponse to the continuous Israeli provocations.”

Before the Al-Aqsa intifada that began in 2000, workers from the Gaza Strip inside Israel accounted for 90,000 who used permits that guarantee them their labor and legal rights. At the time, this situation had a positive impact on the living conditions of Gazans.