Despite killings, violations, Gazans eager to work inside Israel

Gaza Strip workers embark on a perilous journey inside Israel as they are killed or assaulted by Israeli soldiers and settlers while traveling through Israeli checkpoints. 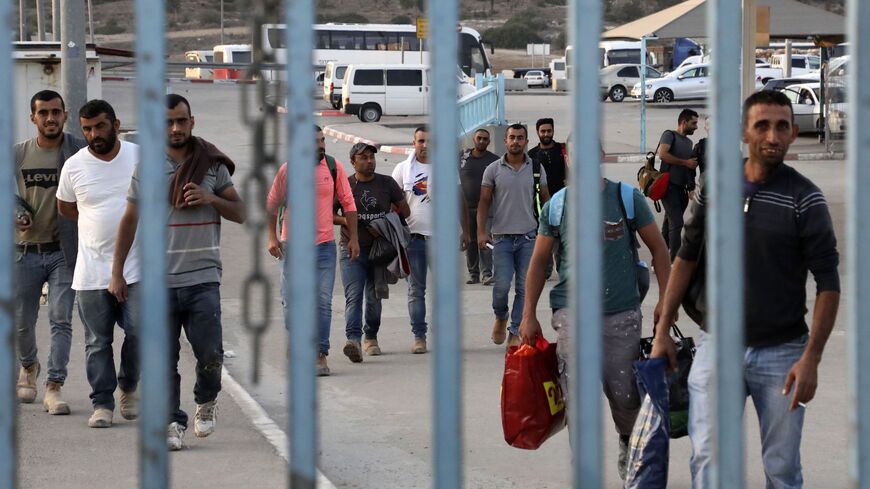 A picture taken from the Israeli side of the Tarkumiya checkpoint near the southern city of Kiryat Gat, shows Palestinian workers crossing into Israel to reach their jobs on Nov. 14, 2019, following the reopening of the checkpoint that was closed during the latest conflict between Israel and militants in the Gaza Strip. - HAZEM BADER/AFP via Getty Images

Gazans are being mistreated during their perilous journey inside Israel as they are shot at or assaulted by Israeli soldiers and settlers, leaving many dead while trying to cross into Israel via Israeli checkpoints in search of work.

Mahmoud Aram, a Palestinian citizen from the Gaza Strip, was killed by an Israeli soldier in May while trying to cross an Israeli checkpoint in the northern West Bank.

Another Gazan, Ahmed Ayyad, died in June after he was beaten by Israeli soldiers inside Israel where he worked in Tulkarem in the northern West Bank.

The Palestinian Foreign Ministry in Ramallah strongly condemned the killings committed by Israeli authorities against Gaza workers, describing these crimes as part of the daily killings of Palestinians that follow the directives and instructions of Israeli political authorities allowing soldiers and settlers to shoot and attack Palestinians.

After a long hiatus, in June Israel allowed Gazan workers to enter and work inside Israel. The move came after Arab and international efforts were deployed following the May 2021 cease-fire agreement reached between Israel and the Palestinian factions in Gaza. These efforts have succeeded in pushing Israel to grant the Gaza Strip a set of economic incentives, and consequently, thousands of workers were allowed to work inside Israeli cities.

Many Gazans are eager to obtain work permits in Israel, as they seek to improve their deteriorating living conditions resulting from the high unemployment rates in Gaza and the Israeli blockade.

But others are voicing concerns over the repeated killings and deliberate assaults committed against Gazan workers.

Gazans continue to suffer violations at work inside Israel, as the latter seems to link their fate to the field developments. These workers are deprived of their most basic labor rights, as Israel refuses to register them as workers and puts them under the category of people with economic needs in order to evade their labor and legal rights and not be obligated to pay any fees.

The fate of Gazan workers who go out every morning to work inside Israel is closely linked to the security conditions in the Gaza Strip. Israel sometimes closes the crossing with the enclave for days and even weeks under the pretext of tense security and military conditions with the Palestinian factions.

Due to the repeated incidents of violence against Gazan workers inside Israel, the family of Amjad al-Rubai, 26, refused to let him leave for work in Israel after Israeli authorities agreed to grant him a work permit amid concerns that their son would be killed.

Amjad, who resides in Deir al-Balah in central Gaza, told Al-Monitor, “I did not mind my family’s objection knowing that I had been waiting for months to obtain a work permit. A job opportunity in Israel would generate good income and allow me to make ends meet. But the trip there is fraught with many dangers, including premeditated murders and beatings of workers moving from one city to another."

He added that Gazan workers are suffering on a daily basis as they spend long hours at the Israeli Erez crossing. Workers leave their homes early in the morning in the hopes of getting an advanced role, and during the long hours of waiting, they face inspection and humiliation, and this punitive policy is deliberately implemented by Israel to pressure the workers.

Sufian Matar, a 34-year-old from the Janaliya camp in the north of Gaza who works in the construction sector in the city of Ramla in eastern Israel, told Al-Monitor that workers in the Gaza Strip are being mistreated by Israeli employers, and their wages are currently low compared to what they used to earn years ago. Israelis, he said, are trying to pressure Gazan workers into leaving, especially considering that there are many laborers of different nationalities already working inside Israel.

He pointed out that several months ago he was run over by a settler while standing in one of Ramla’s parking lots. He suffered shoulder fractures while trying to escape from the vehicle that was speeding toward him. The Israeli police, present at the scene, did not lift a finger, according to Matar.

He said that “the Israelis view us workers as their enemies and treat us with great caution, probably due to the recent series of attacks carried out by Palestinians from the West Bank cities inside Israel.” These operations, he added, claimed the lives of a number of Israeli soldiers and settlers and pushed Israelis to treat all Palestinians with greater caution and vigilance.

Meanwhile, Salah Abdel-Aty, a rights activist and head of the International Commission to Support Palestinian People's Rights, told Al-Monitor that the repeated Israeli punitive practices against Gazan workers are a clear violation of international conventions and covenants that guarantee freedom of movement and workers’ rights to look for a source of livelihood. He called on the International Labor Organization and all international and Arab unions and labor unions to compel Israel to respect the laws and international labor agreements.

According to Abdel-Aty, Israel believes that the punitive measures against workers will deter them and force them not to enter and search for work, but the rising poverty and unemployment rates among Gazans are prompting them to look beyond the risk in search of a source of livelihood.

Abdel-Aty pointed out that Israel is using workers to achieve political goals, and the evidence is Israel’s disavowal of the legal and labor rights of workers.