Many Palestinians in the West Bank and Gaza Strip, where jobs are scarce and low-paying, enter Israel to find work, and those who are truly desperate end up building the very settlements they seek to end. 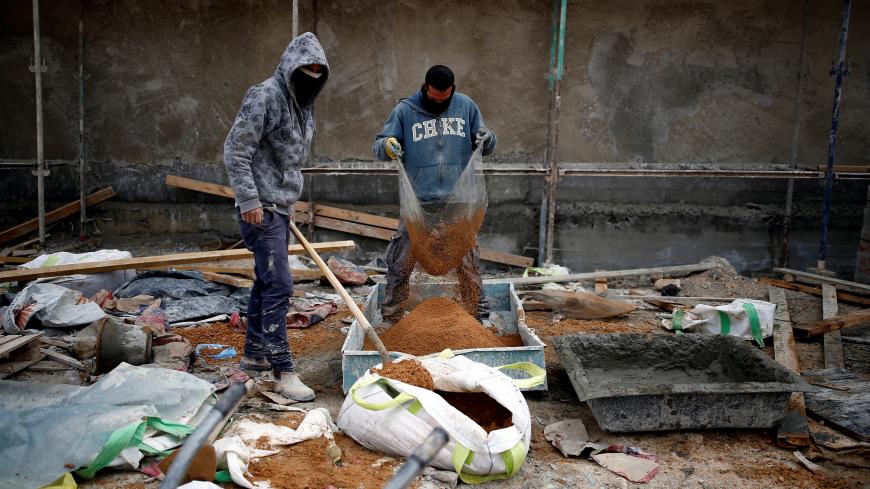 Palestinian construction workers work at a site in the industrial area of the Israeli settlement of Misho Edumim, in the occupied West Bank, Dec. 24, 2016.

GAZA CITY, Gaza Strip — Palestinian Mehdi al-Jabari wakes up at 3 a.m. every Sunday to stand in a long line at the Israeli Meitar checkpoint, which separates the West Bank province of Hebron from Israel. This is the only way he can make it to work in Israeli cities to earn a living.

Jabari has been working in construction in Herzliya, Israel, for 11 years with an Israeli work permit that can be renewed every 45 days. He told Al-Monitor by phone, “My commute consists of a three-hour wait at the Israeli checkpoint, where Israeli soldiers pat me and other workers down, or search us using sniffer dogs.”

Jabari is forced to leave his family and stay in Israel for a whole week at a time to avoid the daily hassle at the checkpoint. He returns Friday night to spend Saturday, his one day off, with his family before returning to work.

“Despite the difficult commute, working in Israel is a dream for Palestinian workers because the daily wage in Israel is three times higher than in the West Bank," Jabari said. For example, a daily West Bank wage of 100 shekels ($27), he said, would be 300 shekels ($82) on average in Israel.

According to statistics published Aug. 7 by the Palestinian Central Bureau of Statistics, 53.7% of Palestinian workers in the Gaza Strip and 19.1% in the West Bank are unemployed.

In mid-July, a West Bank man named Nidal, who declined to give his full name, sneaked into Israel with the help of Arab smugglers in exchange for $1,500. He resorted to smuggling, he said, only after Israeli officials refused to renew his work permit in April, citing undisclosed "security" reasons.

Nidal, who supports a family of seven in Nablus, told Al-Monitor, “The smuggling is carried out through an agreement between the worker and the smuggler to meet at one of the gaps in the apartheid wall. The smuggler then takes the worker to one of the Israeli cities, taking a route that avoids all Israeli security officers.”

Nidal added, “I have been working in agriculture near Tel Aviv since mid-July. I send my family money but I never return home.”

On Aug. 26, the Israeli army arrested 68 illegal Palestinian workers near the Meitar checkpoint as they were trying to cross into Israel through a gap in the wall.

Abu Mourad, an Arab smuggler living in the northern Israeli city of Umm al-Fahm, told Al-Monitor, “Hundreds of workers who failed to obtain work permits inside Israel communicate with dozens of smugglers every day to reach Israeli cities illegally.”

Israeli employers don't mind hiring illegal workers, he said, because it allows the businesses to evade paying benefits such as personal injury compensation or pensions.

In 2015, the Israeli Ministry of Internal Security warned Israeli employers about hiring or providing accommodation for illegal Palestinian workers and threatened to punish violators by closing their companies for 30 days, imposing a fine of 5,000 to 226,000 shekels ($1,390 to $62,700), or even sentencing them to prison for up to four years. Nevertheless, Israeli employers still hire illegal Palestinian workers.

Abu Mourad said Israeli settlers, looking to make easy money, also smuggle Palestinian workers into Israel for $2,000. Palestinian workers often resort to Israeli smugglers because the Israelis can travel between the West Bank and Israel through the main routes more freely and without being inspected at Israeli checkpoints, unlike Arab smugglers, he explained.

Mahmoud Fawzi of Gaza City obtained a permit to enter Israel for a week in June 2016 to accompany his sick sister, who was receiving treatment in a hospital there. When the permit expired, his sister returned home to Gaza, while he made his way to various Israeli cities to work in construction.

“I worked in Israel for a whole year until June 2017 without returning to my family, and I earned $14,000. I would need to work for 10 years nonstop in Gaza and I would still not make that kind of money. I could not even find work there,” he told Al-Monitor.

Fawzi said that when he decided to return to Gaza in June 2017, he contacted a forger in Israel to falsify a permit for Gaza traders for $1,800, through which he managed to easily cross into Gaza through the Israeli-controlled Erez crossing.

He added that he deeply regrets the decision to return to Gaza, as he is now jobless due to the lack of employment opportunities there.

Shaher Saad, secretary-general of the independent Palestinian General Federation of Trade Unions, told Al-Monitor that working inside settlements is unacceptable because it contravenes the Palestinian national duty to fight the settlements. However, he believes Palestinian workers have little choice, given the lack of jobs in the Palestinian territories.

In 2010, the Palestinian Authority issued a decision against Palestinians working in settlements in the West Bank, but it changed nothing, Saad said.

Nasr Abdel Karim, an economics professor at Birzeit University, told Al-Monitor, “Palestinians have no choice but to work in Israel and build its settlements, as 55% of university graduates join the ranks of unemployment every year.”

Abdel Karim explained that the only solution would be to create job opportunities in the local market. He believes that could only happen by eliminating the Paris Protocol on Economic Relations of 1994, which gave Israel the ability to control the Palestinian economy by overseeing imports and exports and collecting Palestinian taxes on behalf of the Palestinian Authority.