Many Palestinians resent having to work in Israeli settlements, but have no choice as the Palestinian economy offers few alternatives. 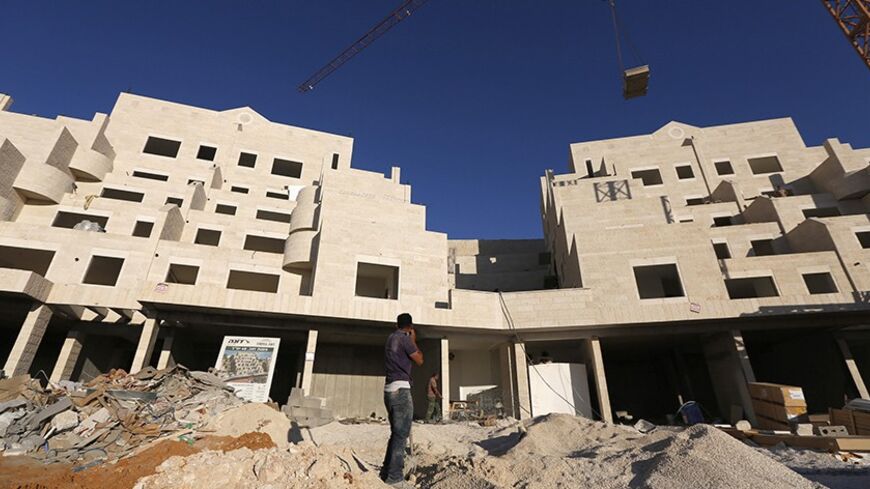 BETHLEHEM, West Bank — At 7 a.m., half a dozen cars carrying Palestinian laborers wait outside the yellow metal gate of the Har Gilo settlement, located on a hilltop in the occupied West Bank.

After queuing for 30 minutes while a long line of cars hurriedly leaves for work and school, dozens of workers in faded clothes slowly get out of their cars, line up and hand their work permits to security guards before making their way to a construction site. Home to some 500 Jewish settlers, almost all the stone houses in Har Gilo have been built by Palestinian laborers.

“I am broken inside,” Waleed Obeidat, one of the workers, tells Al-Monitor. “The settlements are built on our land and at the expense of our rights.”

Jewish settlements and businesses, built on territory Israel occupied in the Six-Day War in 1967, are illegal under international law and deemed an obstacle to peace. The issue made headlines last month when Hollywood actress Scarlett Johansson resigned from her position with Oxfam after the charity criticized her for endorsing SodaStream, an Israeli company whose main factory is located in a settlement in the West Bank.

The dispute that ensued also brought to the surface the worsening economic and political realities of the West Bank that observers say have, in effect, left thousands of Palestinians with few options except to work in an enterprise that they oppose.

According to official statistics, over 20,000 Palestinians are employed in the settlements, with thousands more working without permits. Rights groups say settlement businesses, which enjoy government subsidies and tax breaks, routinely exploit workers.

Israeli labor watchdog Kav LaOved says though Israeli labor laws, including the minimum wage, are supposed to apply in the settlements, there is no enforcement on the ground.

Arafat Amer, a field worker for the group, says most Palestinians working in the settlements are not receiving the minimum wage, benefits, health care, vacations, sick leave, severance pay or retirement funds that they are legally entitled to. Many construction workers often work under unsafe conditions and receive a low daily wage, even when they are employed for an extended period of time.

Amer says most workers, especially in the construction and agricultural sector, are employed through Palestinian labor contractors in a system that prevents workers from accumulating benefits over the years. He tells Al-Monitor, “For settlement businesses, Palestinian workers are cheap, skilled workers.”

Sami Zaher, another worker in Har Gilo, says he makes 110 shekels ($31) a day, 33% more than he would in the West Bank. But an armed security guard watches him all day, and he is paid according to a contractor’s discretion. “Everyone abuses the fact that we need the work,” Zaher says. “We get a daily wage, and that’s it. We have to keep our mouths shut.”

According to a study conducted by Al Quds University, 82% of Palestinian workers said they would like to quit their jobs in the settlements if they found alternative employment in the West Bank.

Israel operates 16 industrial zones in the West Bank and has sanctioned over 120 settlements, home to some 350,000 Jewish settlers. Construction makes up half of all settlement work.

Daniel Birnbaum, CEO of SodaStream — the makers of the home carbonation dispensers that became the focus of debate last month because their main factory is located in the industrial zone of the Ma'ale Adumim settlement — denied accusations that his company exploits employees, saying it provides a steady income for hundreds of Palestinians.

“We’re an employer of equal opportunity, [with] equal wages, equal benefits, and we’re proud of the peace that we’re making here every day,” Birnbaum told journalists during a Feb. 2 news conference.

Diana Buttu, a lawyer who has done extensive research on Palestinian labor, says unlike work in Israel that is subject to a quota and a strict permit system, labor in the settlements is a “free-for-all,” with businesses operating with little to no legal inspection or enforcement.

“Workers are being exploited, that’s the long and short of it. They’re not paid proper wages in an enterprise that’s illegal,” Butto tells Al-Monitor. “Any way you slice it, you’re talking about exploitation.” She says the “boom” of working in the settlements started in the year 2000, when the second intifada erupted, and Israel increased restrictions on work in Israel.

The Palestinian Ministry of Labor says it helps facilitate an average of 35,000 work permits to Israel proper each month, pumping some $300,000 into the West Bank monthly. But it does not deal with labor in the settlements.

Samer Salameh, director-general at the Ministry of Labor, says four years ago, the Palestinian Authority criminalized working in the settlements as well as buying or selling settlement products. Though Palestinian police conducted raids on businesses selling the prohibited items, they stopped short of taking any measures against those directly employed in the settlements.

“We are caught between two fires,” Salameh tells Al-Monitor. “We strongly discourage work in the settlements, since the entire enterprise is illegal and illegitimate,” he says. “But given the high unemployment rate and the lack of alternatives, we do not enforce the law that criminalizes work in the settlements.”

The issue of settlements has long dogged peace talks, which resumed last year under the auspices of the United States. And though international pressure is mounting on Israel to stop expanding its settlement network — with several European countries divesting from Israeli businesses that operate in the settlements — Israel insists that it intends to keep most settlement blocks under a peace deal with the Palestinians.

In downtown Ramallah, the hub of Palestinian political and commercial life, residents casually walk the busy streets to shop or frequent the popular cafes. The reality that Palestinian labor in Jewish settlements at once cements the Israeli occupation and helps feed Palestinian families is a paradox that is not lost on average Palestinians.

“It’s immoral and frankly embarrassing that there are people willing to work these jobs,” Sharif Natshe tells Al-Monitor as he sits with his friends smoking shisha. “I think they should never even consider working there, even if it means being unemployed.”

Mustafa Khader, sitting across from Natshe, quickly jumps in and says, “This is the problem — that many people have to choose between their political principles and putting food on the table.”