Palestinians increasingly depend on Israel’s goodwill to open its gates for poor West Bank workers. 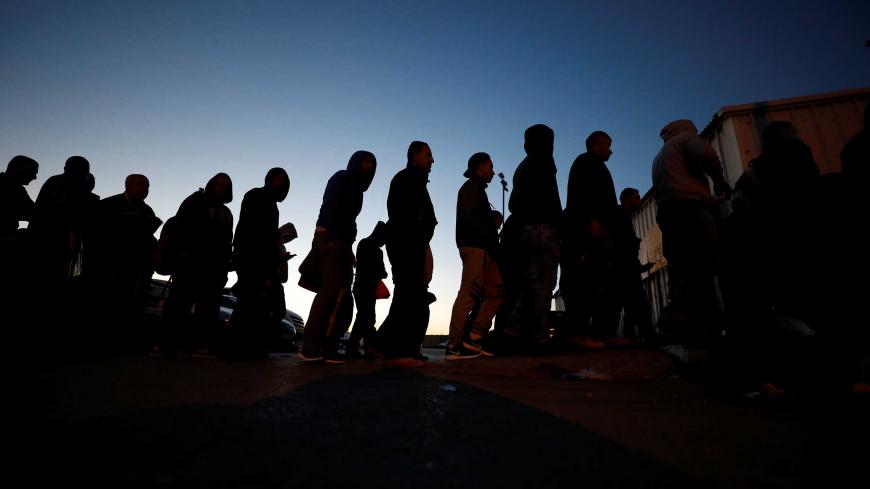 Palestinians working in Israel stand in line as they wait to cross through Israeli Qalandiya checkpoint near the West Bank city of Ramallah, April 25, 2017. - REUTERS/Mohamad Torokman

Israel has decided to close the West Bank to Palestinian entries and departures for 11 days, from Oct. 3-14, including the seven-day Sukkot holiday. This closure exposes the big lie of the occupation: the so-called economic peace touted by the right as an alternative to the two-state solution.

The decision to seal off the West Bank for such an unusually long time, following the Sept. 26 terror attack that killed three Israelis in the settlement of Har Adar, imposes an involuntary furlough on the 63,000 Palestinians who will be unable to reach their workplaces in Israel. (This figure was initially 73,000, but the Agriculture Ministry obtained permits for 10,000 laborers.) Assuming the average Palestinian supports four family members, then almost 300,000 people — including the elderly, women and children — have been deprived of over one-third of their modest income in the past month. Once again, it transpires that closures are not simply a security measure or a populist and punitive deterrent move, but a sophisticated control mechanism over the economy of the West Bank and the welfare of its Palestinian residents.

In addition to the Palestinians granted permits to work in Israel, some 32,000 others are allowed to work in Israeli settlements in the West Bank. For some reason, they were spared this time the collective punishment imposed on their fellow Palestinians banned from traveling to work in Israel. Hard to believe that Israeli security officials screened them and decided they did not constitute a security threat to Israelis in the settlements, while the others were a hazard to Israelis in their own land. This is especially puzzling given that the excuse for such a lengthy closure was the terror attack in Har Adar by a West Bank Palestinian who had worked in the settlement for years and was described by astounded residents as “one of the family.”

As mentioned above, authorities exempted some 10,000 Palestinians employed as agricultural laborers in Israel from the closure. According to an Israeli military spokesman, these lucky souls are employed in vital sectors and cannot be spared for so many days. I looked long and hard and found no evidence to suggest that the Israeli economy was in dire need of street sweepers in the settlement town of Ariel or fruit pickers in other settlements any more than the Israeli coastal town of Netanya needed construction workers or the Northern Galilee region needed heavy machinery operators.

One of the cruel paradoxes of the occupation is that, amid growing international pressure on Israel to freeze construction in the settlements, Palestinian workers are anxiously awaiting new settlement construction permits, perhaps as much as the settlers themselves. In fact, by supporting a boycott of products made in the occupied territories, the Israeli left is depriving Palestinians of their livelihoods in the settlements. International boycott pressure drove SodaStream to move its plant out of the West Bank into Israel, resulting in hundreds of Palestinian workers being laid off last year. Those fortunate enough found work elsewhere or at the company’s plant in Israel. SodaStream announced Oct. 10 that in view of the current closure keeping its workers home, it was temporarily resuming production on its assembly line in the West Bank.

The number of Palestinians currently employed in Israel and the settlements is at an all-time high. In 2015, the Bank of Israel reported that the number of documented and undocumented Palestinian laborers had doubled over the previous four years. The central bank’s economists attributed the growth to supply and demand: The Palestinians need work, and Israeli employers want cheap labor, especially in construction. The Manufacturers Association of Israel predicts that the expected relaxation of Israel's work permit policy in 2018 would expand the Palestinian workforce in Israel by 25%.

Shraga Brosh, president of the Manufacturers Association of Israel, expressed satisfaction with the Israeli government’s recognition of “the great economic advantage in employing Palestinian workers in Israel,” according to the Israeli newspaper Calcalist. Their employment, he said, enhances security and promotes economic peace between Israel and its neighbors. Brosh said that thanks to these diligent and professional workers, Israeli industry continues to grow.

He underscored that employing Palestinians in Israel enables them to make a dignified living at a time of unemployment rates as high as 18.8% in the West Bank. “That is why we must continue and strengthen those who want to work and to contribute,” Brosh said. “In coming to work, they prove day in and day out that there is successful and feasible co-existence in the State of Israel.”

Indeed, this appears to be an exemplary model of co-existence: one side seeking work, the other needing workers. Palestinian residents of the West Bank who are allowed to enter Israel when they behave themselves are undeniably far better off than their Palestinian brethren living in the Hamas-controlled Gaza Strip. However, this shiny coin of seemingly successful co-existence has two sides. A September 2017 report issued by the UN Conference on Trade and Development unveils the dark side. It reveals several explanations for the growing dependence of the Palestinians on their Israeli masters.

The report explains that Area C of the West Bank, which is under Israeli control, cuts the Palestinians off from 60% of the West Bank land and from potential jobs in agriculture, tourism, construction and mining. The decline in the number of agricultural workers in the West Bank stems, in part, from an Israeli interdiction on importing pesticides, which reduced by one-third the number of crops. The dependence on the Israeli currency, the shekel, which in recent years has appreciated 25%, is having a fatal impact on the competitiveness of Palestinian manufacturers and exporters.

Israel’s control over these and other sources of income preserves and strengthens the Palestinian dependence on the ruler — the Israeli employer. Every closure makes clear that the establishment of a Palestinian state, cut off from Israel, would impose a life of destitution on their families. Therefore, they are better off preserving the status quo and keeping their distance from the dominant Palestinian Fatah party, which insists on advocating for a two-state solution, as well as from Hamas, which carries out terror attacks resulting in sieges on its territory, unemployment and dire poverty.

An economy of peace is certainly a positive concept, just not in the way Israel has promoted for the past decade. For the Palestinians, the words “economy” and “peace” have no significance without adding the word “independence.” As long as Israel controls most of Palestinian territory and resources, the economy only serves to blur the pre-1967 Green Line that defines Israel’s internationally recognized borders and to diminish the value of peace in the eyes of employers and employees. Israeli politicians who deprive hundreds of thousands of Palestinians of their living do not contribute a thing to sustainable peace, neither with Palestinians nor their economy. They actually undermine them both.