Israelis and Palestinians fear that the terror attack in the Har Adar settlement will ruin years of good neighborliness. 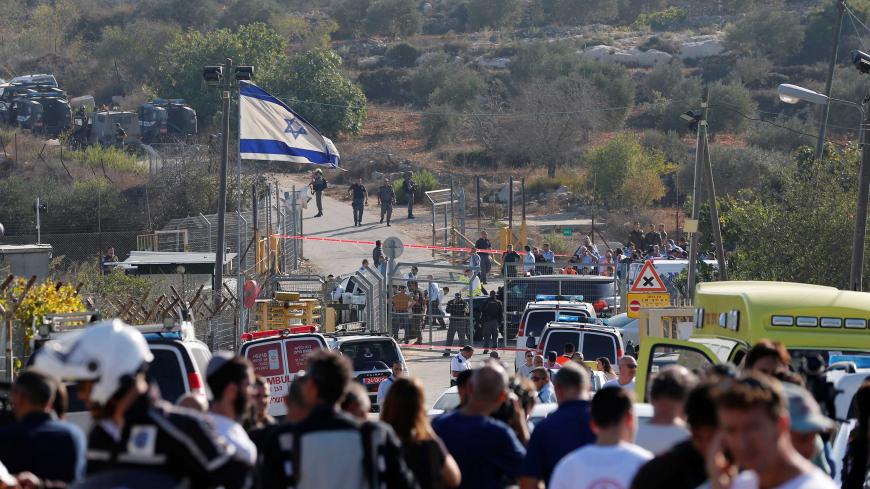 A general view shows the scene where a police spokeswoman said a Palestinian gunman killed three Israeli guards and wounded a fourth in an attack at a Jewish settlement on the occupied West Bank, Sept. 26, 2017. - REUTERS/Ammar Awad

Ashraf works in the paint department of a building supplies store located between the Arab-Israeli village of Abu Ghosh and the Har Adar settlement.

"How are you, Ashraf?" I asked, as he mixed the shade of red I had ordered.

"We're really screwed," he said. "He ruined everything."

Ashraf lives in the West Bank Palestinian village of Beit Surik. He knew Nimr Jamal, who killed three Israeli security officers on Sept. 26 at the checkpoint of the neighboring Israeli settlement of Har Adar. "It's almost inevitable that they'll take our Israeli work permits away for at least a month," he told Al-Monitor. In fact, within just a few hours, Ashraf was informed that he and the other workers would not be allowed to enter Israel at least until after the holiday of Sukkot, in another three weeks.

After the attack, Israeli Public Security Minister Gilad Erdan ordered the immediate enforcement of closure orders on the West Bank that are always imposed during Jewish holidays, and the defense establishment has banned Palestinians from entering Har Adar for the next few days. Freezing the permits that allow Palestinians to work in the settlement effectively means cutting off the main source of income for the residents of the neighboring villages of Bidu and Beit Surik.

The basic elements of the attack in Har Adar, the nature of the West Bank settlement and its location exemplify the complexity of the Palestinian-Israeli conflict. The locality is well-off economically, ranking in the 90th percentile of the Central Bureau of Statistics socioeconomic scale. In the 2015 elections, the Zionist Camp won the most votes there (38%). The Likud came in a distant second (18%), essentially tied with Yesh Atid. The settlement was founded in 1986 on what had been a no-man's land between the 1948 and 1967 wars.

In Har Adar's early years, the access road to it ran through the Palestinian village of Bidu, which also served as a market town for residents of the Jewish settlement. Because of incidents along the road during the first intifada (1987-93), an alternative route was paved from the south and the access road to Bidu, where this week's attack took place, was closed. Nevertheless, hundreds and thousands of residents of Bidu, Beit Surik and other nearby villages worked in Har Adar for years. They built its houses and were employed to do maintenance, cleaning and gardening, and also benefited from the used clothing and other items that the residents of Har Adar gave them.

Har Adar leaders have maintained friendly relations with the heads of local Palestinian clans. Some of these friendships persist until today. An orchard in the center of Har Adar is owned by a Palestinian from Bidu. He has special permission to visit the orchard whenever he wants, to work and pick the fruit.

For the past 14 years, Nimr Jamal had supported his family by working in Har Adar. He was employed as a construction worker, painter, gardener and maintenance man for the local council, and he also worked as a cleaner. Several residents of Har Adar told Al-Monitor that they knew him well.

Michal Lapidot, who employed Jamal as a cleaner, said that he was a nice, friendly man and that she never suspected or feared him. One woman who requested anonymity recalled that she had had several heart-to-hearts with Jamal, in which he told her about his problems at home. He sent her photos of his family, and she in turn sent gifts for his wife and children. Sharon Wechsler, a weather reporter for the Israeli Public Broadcasting Corporation, also had employed Jamal. He told her about his flock of sheep and shared his experiences with her. Yossi Haddad said that he had had no problem leaving Jamal alone in his house with his children, but now, because of the attack, he is having second thoughts about his relationships with Palestinian workers.

While Har Adar has suffered on more than one occasion from arson and Molotov cocktail attacks, burning tires and attempted terrorist incursions, "in the end, employment opportunities ensured calm from the adjacent villages. The Palestinians' desire to earn a respectable living reduced the friction," a senior Israel Defense Forces (IDF) officer who lives in Har Adar told Al-Monitor on the condition of anonymity. "Now," he added, "it is very possible that the whole fabric of coexistence will unravel since it is built on trust."

A source in Shin Bet claimed that Hamas and Islamic Jihad activists are responsible for incitement in the villages, against the opposition of clan leaders, who are more concerned about families earning a livelihood. "Every time that there's an escalation in the Palestinian sector, incidents erupt at this point of friction too," he told Al-Monitor on the condition of anonymity.

Ali, a painter who lives in Bidu, witnessed the attack by Jamal. He said that he laid on the ground as soon as he heard the shots. Border Police officers came by a few moments later to interrogate him. "I knew Nimr," he told Al-Monitor, "and like everyone else here, I knew all about his problems at home. Still, I never believed that it would come to this. What's going to happen now? We're all going to lose our livelihoods because he went crazy." Jamal's wife had recently left him and moved to Jordan with their children.

Immediately after the attack, the office of the local council head, Chen Filipovich, received messages of condolence from Palestinians in Bidu and Beit Surik along with requests to take steps to ensure the rapid renewal of their work permits. Filipovich told Al-Monitor that he will do everything he can to restore coexistence. "We will deal with anyone who wants to hurt us and embrace anyone who wants to cooperate with us," he stressed.

On the other side of Har Adar, in Israel, lies the village of Abu Ghosh, inhabited by Arabs. Even before the State of Israel was established, the villagers had decided that they would not participate in the fight against the Jews. Many Arab residents serve in the IDF, and the village is considered an icon of Arab-Jewish coexistence. Youssef Ottman, whom Jamal shot to death, lived there. Ottman served in the Border Police and worked as a security guard in Har Adar. His father, Isam, told everyone who came to console him that his son was an Israeli citizen in every way imaginable. Among the many visitors to the mourners' tent erected by the family were dozens of residents of Har Adar, including Filipovich.

"A Muslim Palestinian Arab killed two Jews and a Muslim Israeli Arab," said Youssef's cousin Majdi Ottman. He has a pessimistic but realistic perspective on what will happen next. "The Palestinians will return to work in a few days. They need to make a living. But there will never be coexistence, because the terrorists kill indiscriminately. They don't care."