Despite voices on both sides of the Palestinian-Israeli conflict drumming up animosity toward the other side, there are many examples of people from both sides who see the other as human beings. 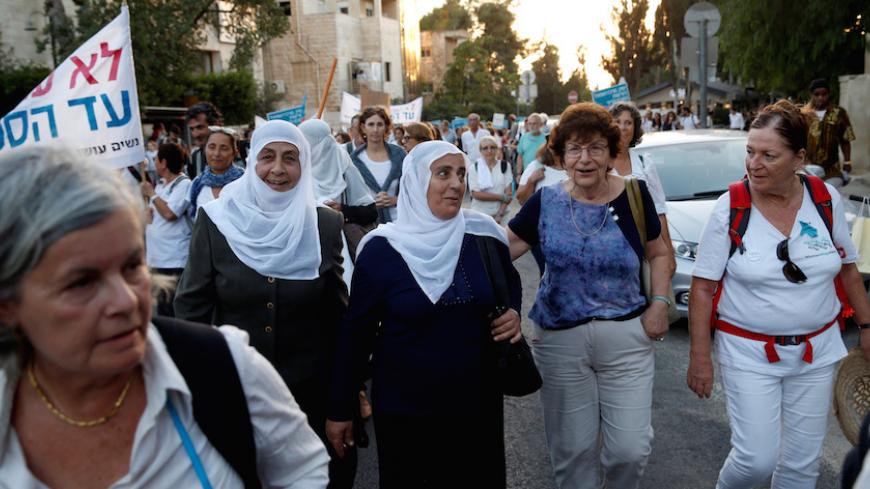 Women take part in a rally, the closing event of the March of Hope, a two-week-long event organized by Women Wage Peace, a nonpolitical movement calling for a peaceful solution to the Israeli-Palestinian conflict and women's participation in such a solution, outside Israeli Prime Minister Benjamin Netanyahu's office in Jerusalem, Oct. 19, 2016. - REUTERS/Baz Ratner

With cement walls and electric fences making a comeback, with the word “Muslims” becoming synonymous with terrorists, with racism enjoying a revival, the recommendation of the Talmud-era sage Hillel the Elder takes on new meaning: “In a place where there are no humans, one must strive to be human” (Pirkei Avit 2:5). It is harder, still, to be a decent human being — in Yiddish, a “mensch” — in a fraught relationship between occupiers and the occupied. Despite the abundance of vitriol injected into the relationship between Israelis and Palestinians by those at the apex of Palestinian and Israeli power, however, there are those who refuse to abandon their humanity.

One such person is Mohammed Jamal, from the West Bank village of Lubban al-Sharqiya, south of Nablus, who rushed to save the victims of a fatal bus crash Jan. 27 outside his house on a rainy winter night. Jamal and his family were the first to help the surviving Jewish passengers, who were on their way to a nearby settlement. In the days that followed, Israeli officers from the Central Command and Civil Administration called the Jamal family to express their gratitude. Capt. Sivan Raviv, the medical officer from the Binyamin Division who oversaw the rescue efforts, said that Jamal and his family arrived at the scene in their pajamas and carrying flashlights. “They didn’t stop to think or consider,” the officer said. “All they saw was the need to save lives.”

Jamal remarked to Israeli television, “When you see an injured person who needs help, you want to help and you must help.” His words brought to mind the image of the Israeli soldier Elor Azaria, who shot and killed a wounded Palestinian assailant last March in Hebron. Too bad Prime Minister Benjamin Netanyahu, who took the trouble to call the soldier’s family to comfort them at the time, could not find the time to say a few words, or even send a tweet, praising the Palestinian family that came to the rescue of injured Israeli settlers. Think how great it would have been if Defense Minister Avigdor Liberman, who attended Azaria’s court martial to express support for the soldier, had invited the Jamal family to his office to shake their hands. He even could have awarded them a medal, used to commemorate and praise a special act, but also to make an educational gesture. Such gestures remind us of the values behind the deeds and decisions of remarkable individuals. It is probably time that Israel established a “Medal of Fraternity” or a “Medal of the Olive Branch” to celebrate people like Jamal.

That said, Jamal is not alone. Palestinian civilians have on numerous occasions extricated Israeli civilians and soldiers who unwittingly entered territory controlled by the Palestinian Authority (PA) and found themselves surrounded by an angry mob. Three years ago, Palestinian peace activists prevented the lynching of a group of young, radical right-wing Israelis, so-called hilltop youth, from the Esh Kodesh settlement, who entered a Palestinian village to carry out a violent hate crime. The activists and local Palestinian leaders alerted Israeli and Palestinian security forces and called them to come and extricate the besieged Israeli youths. According to PA data, in 2015 it handed over 634 Israeli citizens to Israeli authorities who entered Palestinian villages in the West Bank whether by mistake or for nefarious purposes.

On the other side of the conflict one can also find people who view a sick or injured Palestinian first and foremost as a human being in need of assistance. Volunteers from The Road to Recovery, among them former Haifa Mayor Amram Mitzna and former state attorney Eran Shendar, drive hundreds of sick Palestinian children from the Gaza Strip for treatment in Israeli hospitals every week.

In 2015, some 130,000 Palestinians from Gaza and the West Bank were treated in Israeli hospitals (with most of their treatment and hospitalization paid for by the PA). That same year, Dalia Bassa, a vaunted health liaison between the Israeli military and Palestinian authorities, arranged for 120 corneal transplants for visually impaired Palestinians as well as bone marrow transplants for Palestinian children.

In “A Woman on Her Own,” the Israeli translator and author Ilana Hammerman tells of the many years during which she accompanied Palestinian families and friends across the West Bank, helping them in various capacities. Volunteers for Yesh Din provide legal aid to Palestinians who have had their lands taken by Jewish settlers under the auspices of the state. Israeli women from MachsomWatch, an anti-occupation organization, arrive at dawn at military roadblocks to monitor them and help Palestinians with their passage. Members of Physicians for Human Rights, under the leadership of Rafi Walden, operate mobile health clinics throughout the West Bank and provide emergency medical assistance to Gaza residents. I apologize to all the many other human rights groups that I have not the room to mention here.

Nonetheless, people like Jamal and Hammerman are rare, proving that most Israelis and Palestinians have become victims of the violent conflict and of its nationalistic-religious-political incitement. Members of the Jamal family experienced hateful attacks by Palestinians who condemned them for “collaboration with the Jewish occupier.” Meanwhile, a majority of Israeli Jews, 60%, said they did not think Azaria should have been court martialed for killing the injured Palestinian terrorist.

The left-wing Meretz, the only remaining Zionist standard bearer of Jewish-Arab fraternity, is perpetually at the bottom of public opinion polls. A majority of the Jewish public, 57%, has bought into the right-wing propaganda that accuses former President Barack Obama of being unfriendly to Israel, and 69% anticipate a friendlier attitude from Donald Trump as president. On the other hand, the percentage of Palestinians in favor of armed struggle against Israel is on the rise, currently at 37%.

Israeli and Arab human rights and peace activists can only look on with envy at the nationwide protests in the United States against their new president's immigration bans and provocation of the United States' neighbors to the South. In light of the tragic Jan. 18 events involving home demolitions in the Bedouin village of Umm al-Hiran — which took the lives of a local resident, Yakoub Moussa Abu al-Qian, and an Israeli policeman, Erez Levi — some 20 Israeli groups, among them the Meretz and the Hadash parties, will hold a joint Jewish-Arab rally Feb. 4 in Tel Aviv’s Rabin Square. The slogan chosen for the event is “A joint future: they destroy, we build. … This is the moment to stand together, Arabs and Jews, and to issue a clear call: all citizens are equal — both Arabs and Jews, and this home belongs to us all.” One should not be sitting at home, frustrated and frightened, while such events take place. It will be interesting to see how “mensches” leave the comfort of their living rooms on Saturday night and go out to the square.