Why Netanyahu rushed to link Jerusalem attack to IS

Prime Minister Benjamin Netanyahu was quick to blame the Islamic State for the terror attack in Jerusalem, ignoring that Palestinian assailants are motivated first and foremost by the Israeli occupation. 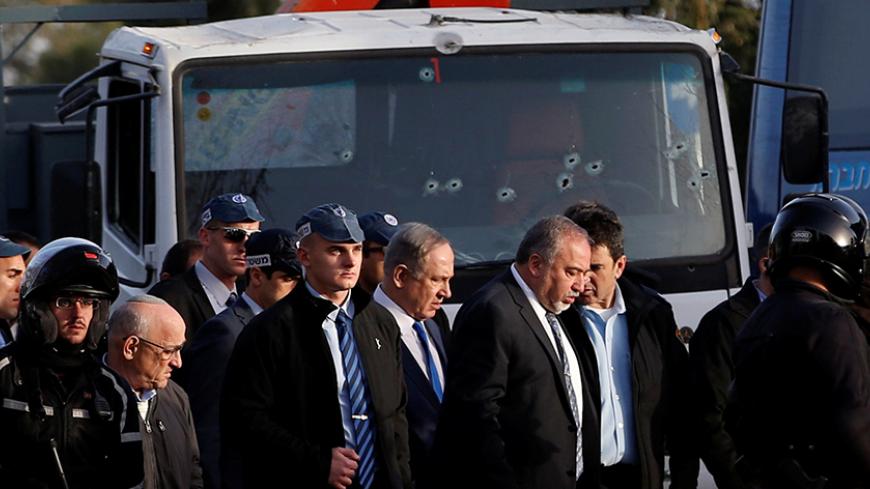 Just moments after the Jan. 8 terror attack in Jerusalem, Prime Minister Benjamin Netanyahu was already able to state categorically, “We know the identity of the attacker, and according to all the signs he is a supporter of Islamic State [IS].” The blood of the four dead and 17 wounded had not even dried when he declared with certitude, “This is part of the same pattern inspired by Islamic State, by ISIS, that we saw first in France, then in Germany and now in Jerusalem.”

Defense Minister Avigdor Liberman also knew right away, stating, “What we have before us is a terror attack purely at the instigation of IS. … We saw it in France, we saw it in Berlin and unfortunately we saw it today in Jerusalem.” The defense minister asserted with total confidence, “It’s clear that there was only one reason for this cruel terror attack — because we are Jews and we’re living here in the State of Israel.”

With a barely disguised dig at Israel’s political left wing — where would we be without them? — Liberman said there is no point in seeking the motive of the truck driver, Fadi al-Qanbar, in 50 years of Israeli occupation or, as he put it, “in the settlement of Jews.” The defense minister knew already with certainty that such attacks are in no way linked to an absence of diplomatic negotiations between Israel and the Palestinians. That is exactly the point of instantly attributing the terror attack to IS: Liberman and Netanyahu wish to sever any link between Palestinian terrorism and Israel’s occupation and settlements and instead plant terrorism in the Israeli consciousness as a type of global “natural disaster” unrelated to Israeli policy.

Police Chief Roni Alsheich backed up the two senior politicians. In his diagnosis, he offered, “It’s safe to assume that waves of international Islamist terrorism are continuing.” The commissioner, tasked with solving crime, not with geopolitical analysis, nonetheless appeared to have noticed that the prime minister had skipped an important part of his instinctive Pavlovian reaction to terror attacks and was quick to fill in the blanks, stating, “Once again, incitement is everywhere, especially in the Palestinian media.”

The murderer could well have been inspired by IS and by truck-driving terrorists in Europe. He may have been weaned on incitement in the Palestinian media, but even so, these are not reasons to ignore the reasonable assumption that the killer had an additional motive. Qanbar lived his entire life under Israeli occupation, without hope of ever living in a state of his own. His village, Jabel Mukaber, was unilaterally annexed to Jerusalem and to the Jewish state in 1967 in violation of international law and defiance of UN resolutions. A glorious Jewish settlement has been established in the heart of his rundown village. Its name, Nof Zion (Landscape of Zion), reflects its founders’ sensitivity to the feelings of their Palestinian neighbors.

Qanbar certainly learned that the Israeli occupiers consider life and liberty as sacrosanct — that is, as long as it’s Jewish life. The court martial of the Israeli soldier Elor Azaria, found guilty Jan. 4 of manslaughter for killing a wounded Palestinian attacker on March 24, is the exception that proves the rule. As far as anyone knows, other than investigating Azaria’s killing of Abdel Fattah al-Sharif, no investigations have been conducted since the start of the so-called stabbing intifada in September 2015 into the killings of other Palestinians during attempted, suspected or actual knifings. The rule proves that had the killing by Azaria not been captured on video by a volunteer of the Israeli human rights group B’Tselem, Sharif would have joined the growing list of Palestinians who died under murky circumstances.

Between April 2011 and the end of 2015, B’Tselem recorded 106 incidents in the West Bank involving 121 unarmed Palestinian civilians being killed. In 30 of the cases, no grounds were found for an investigation. Fourteen of the cases were dismissed. Only one case ended in a conviction, and only one with a decision to indict. This situation stands in flagrant contradiction to official Israel Defense Forces policy, by which every non-operational military event ending in the death of a Palestinian civilian in the West Bank must be investigated.

In 2016, B’Tselem stopped referring complaints to military law enforcement regarding attacks by Israeli security forces against Palestinians. The organization said it had concluded that there was “no longer any point in pursuing justice and defending human rights by working with a system whose real function is measured by its ability to continue to cover up.”

Liberman has said, “People who fight terror and terrorists day in, day out, for months, cannot go on missions with a lawyer at their side.” In referring to this comment, a human rights activist told Al-Monitor this week that soldiers deployed in the occupied territories don’t need a lawyer. They are equipped with masks that allow them complete freedom of movement and protect them against identification, investigation, prosecution and accountability for their actions.

Automatically blaming the killing of the four officer cadets at Jerusalem’s Armon Hanatziv Promenade on IS is a cynical attempt by the Jewish leadership to escape responsibility for the results of its own policies. Even if it turns out that Qanbar was a blind follower of IS, he is the victim of a bloody conflict between his nation and the nation of his victims. The Netanyahu government is unwilling to pay the price for resolving this conflict. Instead, it seeks to manage the occupation by propaganda and fear mongering, demagoguery and self-victimization.

Vehicular terrorism, suicide bombings, stabbings and shootings occurred at the height of past negotiations between Israel and the Palestinians. One can assume that if the sides returned to the negotiating table, bloodthirsty zealots would keep sowing fear and death on the streets. Late Prime Minister Yitzhak Rabin pledged to fight terrorism regardless of peace negotiations and to conduct negotiations regardless of terrorism. Netanyahu, the cigar aficionado, uses terror to snuff out the dying embers of hope for peace.