The truck attack in Jerusalem indicates that the Palestinian intifada has no rules, framework or commanding hierarchy. 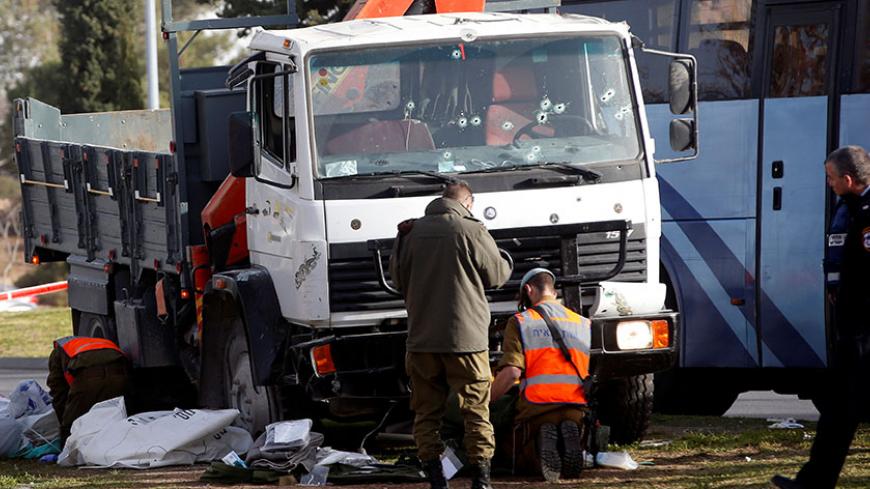 Israeli soldiers work at the scene where police said a Palestinian rammed his truck into a group of Israeli soldiers on a popular promenade in Jerusalem, Jan. 8, 2017. - REUTERS/Ronen Zvulun

A Palestinian youth driving a flatbed truck went on a rampage Jan. 8, killing four Israel Defense Forces (IDF) officers, three of them women, on the Armon Hanatziv promenade in southeastern Jerusalem. A few hours later, Prime Minister Benjamin Netanyahu made an appearance at the site and announced, “We know the identity of the assailant, who according to all indications supported Islamic State.” According to Netanyahu, IS winds blow everywhere, including in Jerusalem.

The use of a truck to conduct the terror attack was, Netanyahu said, a copycat operation following on IS truck rampages like the ones in Nice and at a Christmas market in Berlin. He also remarked that the truck attacks are emblematic of IS’ founding principles: to sow death and destruction by all means available and anywhere possible. This theory helps the prime minister deflect the damage to his image as “Mr. Security” in the public eye despite the attack; it gives him a kind of alibi to equate Jerusalem with Western cities. Yes, Netanyahu says, the horrific winds of IS also blow here, fateful winds that are extremely difficult to counter or fight.

On Jan. 8, a military bus had stopped on the spectacular Armon Hanatziv promenade in Jerusalem. Dozens of IDF cadets from officer training school got off the bus to hear an explanation from a guide. Suddenly, a medium-sized white truck burst into the area, roared onto the pavement and savagely trampled the group of soldiers who were organizing themselves after getting off the bus. The driver, Fadi al-Qanbar, from the Jabel Mukaber section of East Jerusalem, stopped after a few meters, put the truck in reverse and backed up to run over the wounded. At this point, the guide stormed toward Qanbar and shot him numerous times with his pistol. Qanbar, however, continued his frenzied spree of destruction. Two IDF officers then joined the fray and opened fire on the terrorist with their personal weapons. Qanbar was killed after about a minute of bestial savagery that took the lives of four cadets and sent another 15 to nearby hospitals. At least one of the wounded soldiers is in critical condition.

This was the chronicle of a type of terror attack that defies prediction. Qanbar had never been arrested, was not active on social networks and was not known as an Islamist or even as being particularly religious. The fact that he bore a Salafist-type beard, however, may testify to a recent radicalization in his beliefs. It is still unclear whether he planned the attack with the inspiration of other IS-type truck attacks or whether it was a spontaneous decision when he caught sight of the group of Israeli soldiers on the promenade.

In October 2015, the individual intifada, also called the knife intifada, erupted. It ran wild for several months but then began to fade until what seemed to be its final death in recent weeks. The truck attack shows that the spark of the intifada has not been extinguished. It has no laws, no rules, no hierarchy. It is a spontaneous, insane intifada of changing moods within Palestinian society. It seems that it is truly inspired by the pattern of IS attacks that can be seen on every television or computer screen in the Middle East. Only limited methods are available to fight this phenomenon. Instead, it is more advisable for Israelis to accustom themselves to the new situation and focus on minimizing the dangers and risks.

In 2016, Shin Bet reported that of all Muslim communities worldwide, Israeli Arabs have the lowest support for IS and its ideology. On the night of Dec. 8, at a meeting of the Security Cabinet, Shin Bet reported a significant uptick in support for IS among Israeli Arabs, according to security sources. If it is true that Israeli Arabs, who are citizens of Israel, are starting to lean toward IS, then that may be even truer of East Jerusalem Arabs or Palestinians from the territories. This data proves that it is far easier to beat IS on the battlefield, like in Syria and Iraq, than to defeat its constitutive ideology and the winds of insanity blowing through Muslim communities around the world and sweeping away quite a few youths.

Israel is much better trained and experienced than Western countries in coping with the terror phenomenon, but it is still not immune to successful attacks. The reality in Jerusalem, in which there is no physical separation between the two parts of the ostensibly united city, allows any Palestinian youth to get in a random truck and mow down anyone in his path, if he so desires.

Meanwhile, the Israeli Cabinet decided to escalate activities on the ground against IS supporters. It was made public the evening of Dec. 8 that Israel will subject IS supporters to administrative detention, arrest without charges or a trial date. This statement, designed to soothe the public, may or may not meet the legal criterion of the courts. Administrative detention allows security prisoners to be held in detention without trial for long time periods based on classified intelligence material. In all probability, the High Court of Justice will disqualify administrative detention based on “support” for a terror organization, no matter how murderous its terror may be.

Meanwhile, Shin Bet and police arrested nine members of Qanbar’s family and imposed closure on Jabel Mukaber. Netanyahu and Defense Minister Avigdor Liberman made appearances in the area of the attack to demonstrate that everything was under control and to release combative statements to the media. That is the way things were done in the past, and that is the way they will be done in the future as well. Evidently, no real solution is in the offing.

As if all this were not enough to absorb, the attack reawakened the poisonous public debate following the manslaughter conviction of the Israeli soldier Elor Azaria for killing a wounded Palestinian attacker in Hebron in March 2016. Some right-wingers claim that dozens of officers and soldiers fled the murderous truck on Sunday due to the “Azaria effect” — in other words, they were afraid of getting into trouble over shooting the truck driver. This claim has no basis in fact: While many soldiers did flee, quite a number drew their weapons to shoot at the terrorist. This discourse serves to reignite political conflict between Israel’s right and left, which like terror attacks is here to stay.