The Israeli right's hypocrisy on discrimination

Israeli right-wing politicians, though quick to criticize others for what they deem anti-Semitism, support discrimination against Arabs. 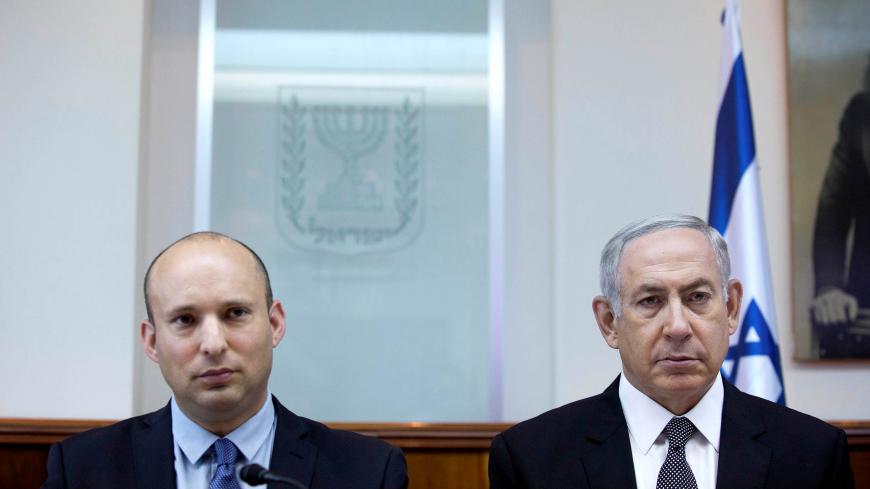 Israeli Prime Minister Benjamin Netanyahu is shocked by the manifestations of anti-Semitism, neo-Nazism and racism in Charlottesville. “Everyone should oppose this hatred,” Netanyahu wrote on the prime minister’s official English-language Twitter account Aug. 15. The same Netanyahu warned the public on the day of the March 2015 elections that Israel’s Arab citizens, who ostensibly enjoy full equality, were “flocking in droves to the polling stations.”

As always, Netanyahu’s response followed closely on the heels of calls by his coalition partner/rival Naftali Bennett, the head of the HaBayit HaYehudi party, demanding that US leaders condemn the latest displays of anti-Semitism. Bennett, the politician who headed up the chorus pleading for a pardon for Elor Azaria, the Israel Defense Forces soldier convicted of shooting dead a wounded, unarmed Palestinian terrorist. If the executed terrorist had not been named Abdel Fattah al-Sharif, but rather Baruch Goldstein, the Jewish settler who massacred 29 Muslim worshippers in 1994 in Hebron’s Cave of the Patriarchs, not a single patriotic politician would have sided with the soldier.

Bennett’s Knesset faction includes Bezalel Smotrich, the lawmaker who demanded the separation of Jewish and Arab women in hospital maternity wards last year. Netanyahu and Bennett both lead parties that refuse to recognize the rights of millions of Palestinians to a state of their own, because they were not born to Jewish mothers nor converted according to the laws of the ultra-Orthodox, who constitute a minority stream within Judaism.

Look who’s talking, or, as the Talmud put it, “Remove the beam from between your eyes” (Arakin 16b). The beam is so thick that it blinds leaders of the political right to the image of their own shameful racist selves. The Israeli leadership exudes a stench of racism. The Jewish alt-right occupies the seat of government and the front benches of the legislature. From those perches it devises initiative after initiative that are anathema to those on the right, such as Likud Party Knesset member Benny Begin, who hold dear the principles of democracy. Following are two blatant instances of racism that Begin has lambasted through the media.

Begin has been trying — to no avail — to convince the prime minister and his friends in the Likud leadership to append a commitment to the contentious proposed Nationality Law, saying that the State of Israel would provide equal rights to all its citizens. Writing in June in the right-wing newspaper Yisrael Hayom, Begin noted that about one-quarter of the citizens of Israel are not Jews. “As Jews we have always demanded and continue to demand equal rights for Jews in all countries, and now we are refusing to anchor this right in our law for all our citizens?” he wrote. The man who Netanyahu insisted on including in the Likud’s Knesset list continued, “When the 2017 Likud leadership disqualifies a proposed bill, according to which Israel is the nation-state of the Jewish people, simply because it also stipulates equal rights for all its citizens, the ‘Likud’s alleged problem’ with the legislation becomes a national problem that lies in its rejection.”

The Nationality Law not only anchors the supremacy of the Jewish people and skips over the principle of equal rights for all citizens, the bill also precludes equal rights for all Jews, such as Reform and conservative Jews, by referring to “Jewish tradition” implying that of Orthodox Jewry.

So while Netanyahu is shocked by the racism in Virginia directed at American Jews, he ignores the abundant promises he gave the heads of the Reform and conservative communities, who constitute a vast majority of US Jewry, to grant them equal rights in prayers at Judaism’s holiest site, Jerusalem’s Western Wall, and in religious conversions. Netanyahu has retracted from a compromise outline reached last year, allocating progressive Judaism a prayer space by the Western Wall.

Another racist chapter in the annals of Israeli legislation was written by the Knesset’s approval earlier this year of the Regularization Law that essentially grants Jewish people the right to steal the land of another people (by legalizing West Bank outposts constructed on private Palestinian lands). “This law casts a long shadow over the entire state because its aim is not to regulate, it’s to steal,” Begin said in September 2016 of the bill that allows Jewish settlers in the occupied West Bank to take over Palestinian land. “Any person with eyes in their head who wants to behave with even an iota of decency accepts the saying of Hillel the Elder, 'What is hateful to you, do not do to your fellow,'” the right-wing Knesset member said.

There is undoubtedly reason to criticize the conduct of US President Donald Trump following the racist violence in Virginia; there is undoubtedly room for firm action against racist groups and individuals who abuse the First Amendment of the constitution.

But to paraphrase our sages, “Clean up your act before you go off preaching to others” (Baba Batra 60b). Elected Israeli officials, who demand of foreign leaders zero tolerance toward displays of anti-Semitism, are hardly beacons of tolerance.

While American activists of the alt-right are only found on the margins of society, the alt-right rabbis in Israel are sitting pretty at the heart of the establishment. Rabbis who issued religious edicts calling on Jews to avoid renting or selling apartments to Arabs, not to employ them and not to buy from their shops, are still on the public payroll. Unlike Muslim clerics who are prosecuted for incitement to racism, Jewish ones enjoy de facto immunity from prosecution.

Shouts of “Death to Arabs” as well as “Slaughter the Jews” have become an integral part of football stadium folklore in recent years. Activists of the radical right Lehava organization openly harass Palestinian bus and cab drivers in Jerusalem and Arabs who dare befriend Jewish women, and even set fire to a bilingual Jewish-Arab school in the city, a bastion of coexistence. A 2011 law allows community selection committees to reject certain tenants on the grounds of a euphemistic “lack of suitability to the social-cultural nature of the community.”

The vast majority of Israeli Jews accept the refusal of a “progressive” community like Kochav Yair to open its pool to Arab children from neighboring villages; politicians have not spoken out against this decision, either. Israelis preserve the right to shout at an insensitive Swiss hotel owner who asked Jewish guests to take a shower before going into the pool.