Gaza markets full of Ramadan treats, but who can afford them?

With the onset of Ramadan, Gaza’s merchants have plenty of goods to sell for fair prices, but face a costumer base with very little cash. 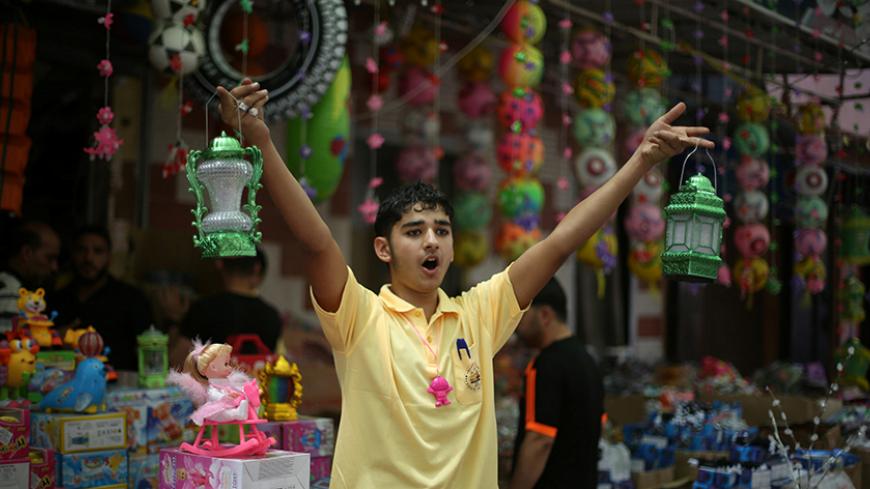 A Palestinian youth sells lanterns ahead of the Muslim fasting month of Ramadan in the southern Gaza Strip, June 5, 2016. - REUTERS/Ibraheem Abu Mustafa

GAZA CITY, Gaza Strip — Enchanting lights and all sorts of food adorn Gaza’s markets as Ramadan begins. This year’s decorations are far more alluring than those of the previous years since the 2014 Israeli war on Gaza, and merchants expect at least a slight improvement in the markets this season.

Israeli Defense Minister Avigdor Liberman approved changes to the Kerem Shalom crossing — the only commercial crossing for Gazans — June 3 that included extending its hours of operation. Many traders and importers Al-Monitor interviewed agreed that the quantity of goods popular during Ramadan such as dates, cheese and other products has slightly increased as a result.

Mohammed al-Balawi, a partner in al-Balawi Company for Dates Importing in central Gaza City, told Al-Monitor that the quantities of dates that have entered Gaza through the Kerem Shalom crossing in the southern Gaza Strip meets the needs of the Gazan market, which consumes more than 800 tons of dates during Ramadan.

Balawi said that larger quantities of various types of premium dates have entered Gaza this year compared to the years since the 2014 war, in particular the Medjool type. Notably, Israel controls the types and quantities of dates that are brought into Gaza per the Paris Economic Protocol, which states that the importation of consumer goods shall be done in accordance with the Palestinian and Israeli estimates.

A report issued by the Chamber of Commerce and Industry in Gaza on April 13 pointed to an increase in the number of commercial trucks entering Gaza for the first quarter of 2016. The number of trucks carrying various goods reached 33,006 compared with 16,978 for the same period in 2015 and 11,303 for that period in 2014.

Balawi noted that the current market price for dates ranges between 9 and 27 Israeli shekels ($2.30 to $7) per kilo, but consumer spending is still timid because of the citizens’ difficult economic situation and the civil servants’ salary crisis. He is concerned, along with other merchants, that losses will be similar to what they incurred during recent years if the consumer spending remains at this level.

For his part, Ali Abu Sakhr, the owner of Bilal for Toys, one of the largest shops for toys and Ramadan decorations in the Nuseirat refugee camp in Deir el-Balah governorate, expects a slight improvement in the market in the coming days, since Hamas employees have received part of their salaries. In light of the rampant unemployment in Gaza, these funds may be the financial liquidity needed to activate the market.

Abu Sakhr told Al-Monitor, “I have large quantities of lanterns and decorations for Ramadan that Gazans usually purchase during the first few days of this month, but I could only sell 30% of what I have so far.” He added, “Many people come in to browse, but only a few buy something, although the lanterns’ prices range between 5 and 10 shekels ($3 to $6), which is a fair price in light of the difficult financial situation.”

Abdul-Fattah Abu Muhsen, spokesman and director of the Media Department of Gaza's Economy Ministry, told Al-Monitor that the quantities of consumer goods that entered the Gaza Strip in June through the Kerem Shalom crossing are sufficient for the consumers’ needs during Ramadan. He said, “The diversity of the goods is extremely important for us Palestinians, but Israel is still banning several types of goods, including certain foods, in addition to the materials we need for agriculture such as fertilizers and other chemicals.”

Abu Muhsen attributed the low consumer spending to the Gaza Strip's unemployment rate, which has reached almost 43%, as well as to the employees of the former Gaza government having only just started receiving 45% of their salaries.

The Palestinian Authority does not recognize the workers appointed by Hamas while in power in Gaza. The Ministry of Finance controlled by Hamas has been giving them an advance payment each month for over two years, while PA-affiliated staff in Gaza receive full salaries.

He also called on Israel to reopen the border crossings with the Gaza Strip to improve the economic situation and allow more workers to cross through. Israel has kept all on its border but Kerem Shalom closed since 2007 after Hamas took control of the Gaza Strip, further tightening the noose on Gazans and significantly contributing to destroying the Palestinian economy.

Moeen Rajab, a professor of economics at Al-Azhar University in Gaza, explained that merchants buy large quantities of goods before Ramadan because during the month, consumers buy double the amount of goods compared to other months.

Rajab told Al-Monitor that the biggest dilemma is the consumers’ lack of liquidity and their accumulated debts. He stressed that assessing retail activity takes time, despite the numbers initially looking weak as Israel is still imposing restrictions on the entry of goods to the Gaza Strip. He expects consumer spending to improve if Israel grants some serious allowances on consumer goods entering Gaza.

Citizens interviewed by Al-Monitor expressed satisfaction with the goods offered in the market, but explained that their finances force them to buy limited quantities.

Al-Monitor met housewife Suhad Rajab, 42, at the central Nuseirat market in central Gaza. She was buying Ramadan lanterns for her children, as she does every year. “There are so many enticing goods offered at prices affordable for everyone,” she said.

Wassim Youssef, 30, a civil servant for Gaza’s previous government, told Al-Monitor, “I still have not bought [my family’s] Ramadan needs. I do not know when the government will disburse the financial advance, which does not exceed 45% of my basic salary. For my three children and me, this Ramadan season will be similar to the two previous ones. We will have to cut our spending and content ourselves with few goods.”