Gaza residents are outraged as the government fails to control traders who have increased the price of chicken, which is the preferred meat during the month of Ramadan. 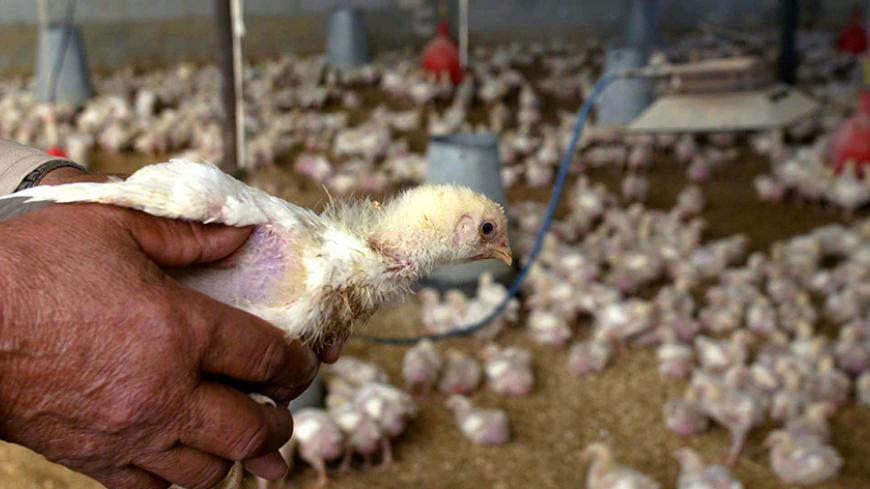 A Palestinian worker carries a chicken inside his farm in the southern Gaza Strip, March 22, 2006. - REUTERS/Ibraheem Abu Mustafa

GAZA CITY, Gaza Strip — Chicken, a basic component of iftar (breaking of the fast) during Ramadan, is no longer available to most Gazans. Its increasing price has led citizens to hold the Hamas government in the Gaza Strip responsible amid the spread of the black market for chicken and the government’s failure to sanction the traders’ manipulation of prices.

During a field tour conducted by Al-Monitor in the markets of Gaza City to check on the price of chicken, many citizens expressed their discontent at the merchants’ exploitation of citizens calling on the government to put an end to the monopoly and price manipulation plaguing Gaza.

Gazans believe that the government should not cater to the interests of a couple of traders and choose to overlook the majority of the citizens. They say the government cannot remain silent as traders raise the price of chicken, while its representatives issue countless reassuring statements about a drop in prices during Ramadan, without the situation changing. One kilogram (2.2 pounds) of chicken now costs 15-16 Israeli shekels (about $4), while it did not cost more than 10 shekels ($2.60) before Ramadan started two weeks ago.

Citizens started a hashtag in Arabic, which would translate into #IBoycott Exploitation, to express their disapproval of the high price of chicken in the Gaza Strip during the month of Ramadan.

Hamas government employee Imad Selmi told Al-Monitor from the Sheikh Radwan market north of Gaza City, “I could not afford to buy chicken, even long before Ramadan started. My family is made up of 10 members and we need at least three chickens per day, which cost 90 shekels. Given that we are not getting our full salaries and the price of chicken is on the rise, I chose to not eat chicken pending its price decrease.”

Amani al-Othmani, a housewife whom Al-Monitor spoke to while she was shopping at the Shajaiya market, said, “My husband is sick and does not work, and we live off [support provided by] the Ministry of Social Affairs, which gives us a check of 1,800 shekels [$466] every three months. I was waiting for Ramadan to be able to eat chicken with my family. The statements made by the officials led me to think that the price of poultry would be falling and would become accessible to everyone, but unfortunately the prices have further increased amid the merchants’ exploitation of citizens during Ramadan. They are controlling the price [of chicken] while turning a blind eye to the decrees of the Ministry of Economy that sets and decreases prices.”

In contrast, chicken vendors interviewed by Al-Monitor complained about the deterioration of the economic conditions and the lack of demand for their merchandise due to the high prices.

Zuhair al-Hor, a chicken vendor in the market of Nuseirat refugee camp, told Al-Monitor, “Selling chicken has become difficult due to the increasing prices, which are the result of the high prices of feed and chicks.” He added, “The increasing prices have had an equally adverse effect on the vendors given that they are no longer making a profit. Prices are high in general and do not suit all social strata.”

For his part, Mohammed al-Kurdi, who sells chicken at the market in Shati refugee camp, told Al-Monitor that he has fallen — just like citizens — “prey to the high cost of poultry,” because as a seller he does not control the price of chicken.

According to Kurdi, it is the big traders who import chicks and fertilized eggs from Israel as well as farm owners and black market traders who are in control of these prices, knowing that they are not subject to the control of the government in Gaza. This negatively affects citizens, who then avoid buying chickens, leading vendors to suffer losses.

The director of the Animal Production Department at the Ministry of Agriculture, Taher Abu Hamad, told Al-Monitor that he expects “the price of chicken to decrease in the coming days. The high prices result from increased demand and limited supply during Ramadan due to the low number of chickens reaching the Gaza Strip. Add to this the heat wave and the diseases that contribute to the death of large numbers of chicks at the farms.”

Abu Hamad said that his ministry has requested many of the traders who are registered with the Ministry of Economy and work in the trade of meat and chickens to import large quantities of fertilized eggs. This could result in more than 5 million chickens, thus covering the needs of Gazans during and after Ramadan. He added that the Ministry of Agriculture directly interferes by importing frozen chicken and meat as a temporary substitute for chicken, which will help bridge the needs of citizens and will work to reduce the price of chicken.

On June 13, the Ministry of Economy in Gaza set in collaboration with the Ministry of Agriculture the market price of 1 kilogram of chicken at 11.50 shekels ($3) and ordered the application of this price immediately after the issuance of the decision. But many traders raised their prices further, which has sparked a wave of discontent among citizens who directed their anger at the government for failing to follow up on its decree and leaving them vulnerable to exploitation by chicken traders and vendors.

Abdul Fattah Abu Musa, the spokesman for the Palestinian Ministry of Economy, told Al-Monitor that his ministry is working with the Ministry of Agriculture and in coordination with the meat and chicken traders who are registered at the ministry to import large numbers of fertilized eggs and frozen chicken and meat to Gaza.

This policy will certainly reduce the price of chicken in the near future, Abu Musa said, stressing, “The ministry's Consumer Protection Department will begin to follow up on and monitor the price [of chickens] and intervene in emergency situations and in times of crisis.”

Economist and professor of economics at Al-Azhar University in Gaza, Mazen al-Ajala, told Al-Monitor, “The price of chicken increases every Ramadan amid the officials’ failure to provide solutions, such as setting a fixed price for 1 kilogram of chicken throughout the year and laws to deter and punish monopolizing traders. This is either due to an increased demand for chicken during Ramadan or to the monopolistic policy adopted by senior traders toward citizens.”

Ajala also attributed the increase in the price of chicken to the fact that there are poultry companies and farms run by people and officials in the Hamas movement and those who have relations with the government in Gaza. It is in their interest to keep prices high until their goods are sold. In both cases, citizens are the ones paying the price of this unjust policy.