Gaza is banned from importing donkeys after an Israeli NGO claimed they are transported to China for the skin and meat industries. 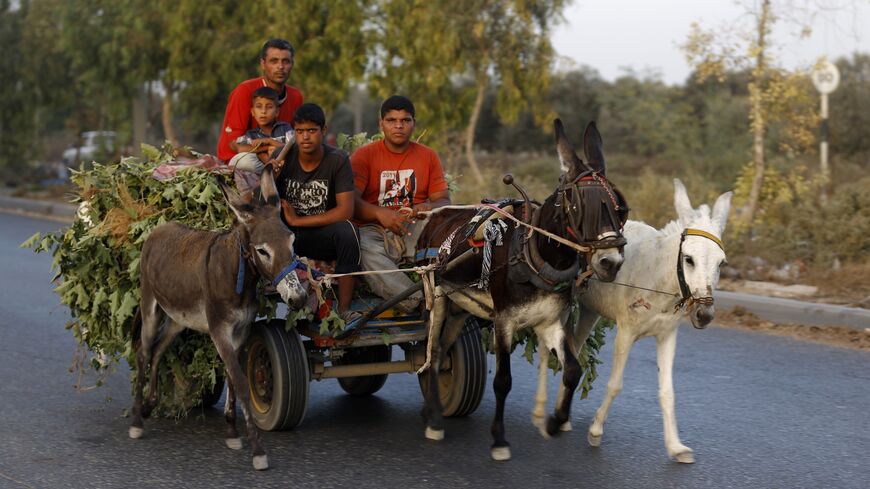 “They told me Gazan livestock traders were not allowed to import donkeys. I was shocked. I still can’t import them; my [import] permit to enter Israel expired, and I can’t renew it to date without any obvious reasons,” Alnadi said while feeding cows. He trades cows, sheep and donkeys he imports from Israel to sell them in Gaza. He said Gaza imported 500 donkeys last year.

According to local traders, the ban went into effect in December 2021 after an Israeli nongovernmental organization claimed that donkeys were transported from Israel to Gaza to China through Egypt to benefit the skin and meat industries.

There has been no official announcement of the ban, however, it seems to be an ongoing practice as traders are still unable to import donkeys.

Gaza’s Agriculture Ministry knew about the ban from the media last month, according to Fayez Alshaikh, head of the ministry's media and public relations.

“All those claims are baseless. We don’t slaughter donkeys in Gaza. We import for the local market. Their prices now are significantly increased,” Alnadi added.

Omar Abu Matar, a livestock trader, imported 120 donkeys from Israel in 2021. Two weeks ago, he was banned from doing so again.

“I asked another local trader to import 35 donkeys for me a couple of weeks ago, but he also was banned. Seventy to 100 donkeys are sold in livestock markets in all the Strip every week,” he said.

The high demand for donkeys is because they are widely used in Gaza by vendors, farmers and those who collect rubble, plastic bottles and similar items to sell as recycling.

“Many poor vendors and farmers asked me to sell my donkeys in installments as they can't afford cash, but I refused because I always need liquidity,” Abu Matar said.

Vendor Tariq Alsaloul, 21, was covering his donkey with nylon from the rain while selling bananas in a street market in Al-Bureij camp in the middle of Gaza.

“My brothers and I have five donkeys, which we use for work. My donkey and cart are worth 1,000 Jordanian dinars now, while their price was 700 dinars last year. If my donkey dies, I can’t afford a new one. High prices have badly affected us at all levels," Alsaloul told Al-Monitor.

Alshaikh told Al-Monitor that Israel told the Agriculture Ministry it did not ban Gaza from importing donkeys. Nevertheless, livestock traders from three different governorates in the Strip confirmed the ban.

Feed prices have soared in the coastal enclave since the Russia-Ukraine war began.

“The prices of feed have decreased worldwide but are still high in Gaza due to merchants' greed. What blows minds is that the prices of animals used to go down when feed was expensive, but now donkeys and feed are expensive,” a feed trader who asked to remain anonymous told Al-Monitor.

Though Gaza can still import horses, their prices have increased as well.

Ramzi Baroad, a horse trader, told Al-Monitor that horse prices ranged from 400 to 1,500 dinars but have recently risen by at least 300 dinars.

Since many professions still depend on donkeys, the ban has badly affected Gazans using them. Many vendors and farmers now pay for them in installments due to high prices.

“This is a part of the blockade imposed on the Gaza Strip since 2007, which harms the agricultural sector and large group of people in Gaza," said Salah Abdalati, director of the International Commission to Support Palestinian People’s Rights.