The Egyptian Farmers Syndicate warns that donkeys are being slaughtered in large numbers for their skins that are smuggled illegally abroad. 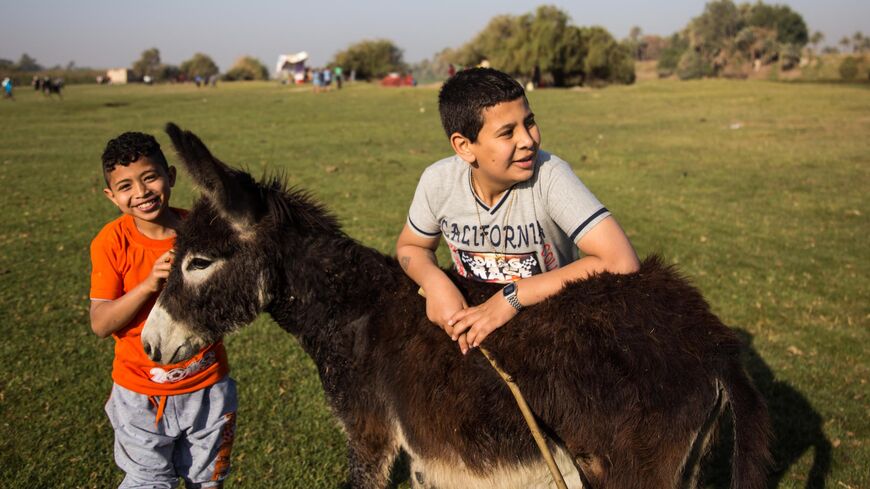 Egyptian children play with a baby donkey near one of the branches of the Nile in the southern town of Mallawi, on April 9, 2018, as they celebrate Sham al-Nessim, a Pharaonic feast that marks the start of spring. - IBRAHIM EZZAT/AFP via Getty Images

CAIRO — The head of the Egyptian Farmers Syndicate, Hussein Abdel Rahman Abu Saddam, warned in a July 29 press conference that Egypt's donkey population is in danger. He said that donkey hides have become so valuable that people are slaughtering them to sell their skins for export.

In a video report published on May 6, the World Veterinary Association warned that donkeys in Africa are threatened by the illegal trade in their skins. They are being exported to China, where they are used in the manufacture of several products. The affect on agriculture in Africa is grave, as donkeys are essential to ploughing land and transporting water and goods, the report added.

Speaking to Al-Monitor via phone, Abu Saddam said that many donkeys have been “replaced by small vehicles like tuk-tuks and tricycles used by farmers to transport goods and people.”

He said that Egypt's donkeys are dwindling, adding that donkey theft has also become a problem.

According to the UK-based charity The Donkey Sanctuary, the increasing demand for donkeys owes to a substance called ejiao, a gelatin made from their skins and used in traditional medicine and the manufacture of food, beverages and face creams.

Abu Saddam explained that the price of one donkey in Egypt ranges between 800 to 3,000 Egyptian pounds (from about $51 to $191), compared to 500 pounds (about $32) for a pelt. “This encourages some unethical traders to buy them to sell their skins and their meat for human consumption,” he said.

“Donkeys are an important element in the ecological balance and their increased slaughter might endanger their existence, which could upset the ecological system,” he added.

Abu Saddam called on the state and animal welfare associations to work together to conserve the animals' population by imposing for people who slaughter them illegally.

In 2016, Egypt and China signed a deal whereby Egypt would export 10,000 male donkeys to China a year.

Animal rights activist Dina Zulfikar told Al-Monitor via phone, “Activists have been calling since 2008 to stop the exportation of donkey hides."

“Large quantities in addition to the official numbers are also smuggled illegally to China. There is a mafia that controls the trade of donkey skins in Egypt." She said that Egypt is a top supplier of donkey hides to China and because donkeys' gestation period is longer than other animals', the local stock cannot keep up with the demand.

Every now and then, news makes the rounds on social media about donkeys slaughtered en masses and their remains left in the streets. Most recently, on June 5, the remains of dozens of slaughtered and skinned donkeys were found in the Menoufia governorate, north of Cairo.

The Giza Zoo in Egypt is the only state-sanctioned source of donkey hides, as they slaughter them to feed the animals and sell the skins to exporters. The zoo has been using donkey meat to feed wild animals in zoos and inside circuses and other facilities.

Muhammad Shafiq, Secretary-General of the Syndicate of Veterinarians, told Al-Monitor, “The increase in Chinese demand for donkey skins shows that they are economically valuable. China has realized this fact some time ago, and also other African countries that stopped exporting donkey hides [for domestic use]. Egypt ought to realize the value of this wealth.”

“Therefore, it is imperative to stop the illegal slaughter of donkeys and to keep better population counts because the figures available are inaccurate,” he added.

Shafiq went on, “It is important to establish a health care system for donkeys through the issuance of health cards for each animal with important information and the date for the necessary vaccinations. It is equally imperative to raise awareness of the importance of this animal.”

“It is also possible to establish farms to increase the number of donkeys and localize the medical gelatin industry, thus offering economic benefits without threatening the numbers of the animals,” he concluded.