As part of the truce agreements Israel reached with Hamas in the Gaza Strip, 2,000 merchants from the Strip will obtain permits to work in Israel, which will have a positive impact on the Gazan economy. 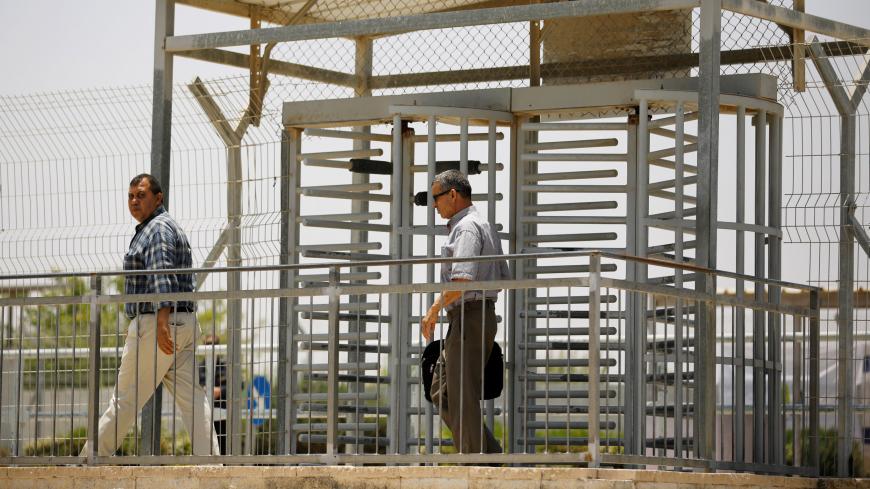 Palestinian men walk through a turnstile into the Israel side of the Israeli-Gaza Erez crossing, June 23, 2019. - REUTERS/Amir Cohen

GAZA CITY, Gaza Strip — Israeli media outlets reported Feb. 18 that for the first time since 2006, Israeli authorities will allow 7,000 Gazan merchants to work inside Israel. Israel’s Channel 13 quoted an Israeli security source as saying the fishing zone would be expanded to 15 nautical miles and the number of work permits to merchants would increase to 7,000. The Gaza Chamber of Commerce and Industry said Feb. 20 it will start receiving new applications for the work permits in Israel.

Maher Tabbaa, director of public relations and media at the Gaza Chamber of Commerce and Industry, told Al-Monitor that “an additional 2,000 permits for merchants to work in Israel will be granted. This number will be added to the already 5,000 merchants allowed to work in Israel. The increase in the number of work permits is a part of the truce understanding Hamas and Israel reached.” He explained that the new permits are equally distributed among Gaza’s five chambers — namely 200 permits for each of the governorates — and said they will be accepting 1,000 applications in the first stage.

Tabbaa indicated there are nearly 20,000 merchants working in the Gaza Strip, adding that Israel barred these merchants from working in its territories in 2006 but gradually started to grant some of them permits after the signing of the truce understanding.

The Palestinian Central Bureau of Statistics wrote in its Feb. 13 statement that the number of Palestinians working in Israel and Israeli settlements hit 133,000. He pointed out that these workers come from both the West Bank and Gaza Strip.

Tabbaa said the decision to allow these merchants to work in all sectors in Israel would help ease the liquidity problem in the Gaza Strip with the cash they will bring in and pump into the market.

After the decision to grant additional permits was released, Al-Monitor saw hundreds of Palestinian merchants lined up in front of the chamber’s headquarters in Gaza City to apply for work permits. Rafiq Raja, a home furniture merchant, told Al-Monitor he hopes his application will be approved in order for him to compensate for the losses he suffered under the hard economic situation in Gaza. He noted he is applying because his company in Gaza is nearing bankruptcy.

Muhammad Miqdad, a professor of economics and finance at the Islamic University in Gaza, told Al-Monitor such Israeli measures will lead to a positive economic impact on Gaza. He described the lack of liquidity as a very serious problem in Gaza, given the high unemployment rate and low salaries.

Miqdad estimated the decision would generate $140 million in yearly income in Gaza, but he said such a measure is not a solution to the Gaza economic problem, adding that Palestinian agreements made with world countries must be reactivated instead.

Economic analyst Samir Abu Mudallal told Al-Monitor the Israeli blockade is causing the Gaza Strip up to $1.5 billion in economic losses. “Thus, Israel allowing 7,000 Palestinian merchants from Gaza to work there is a positive step, albeit insufficient,” Abu Mudallal noted.

He said “such a step would help improve the economic situation of 7,000 Palestinian households in the Gaza Strip and reduce unemployment," yet it will not resolve Gaza’s economic crisis in the long run.

Abu Mudallal said Israel needs to lift the siege in order for the economic situation to improve in the Gaza Strip. Israel also needs to let go of the commercial crossings and allow Palestinians to exploit their economic resources, he added.

Political analyst Ibrahim Habib told Al-Monitor the Israeli decision is an attempt to ease the tension on the Gazan front, noting Israel “does not want the situation to explode in the Gaza Strip.”

“This decision is part of the Israeli incentives that the Palestinian resistance pressured for in the past few weeks,” Habib said, referring to the incendiary balloons fired at the Israeli settlements in the Gaza envelope.

“The current situation in the Gaza Strip is ideal for Israel and much better than a military confrontation prior to the slated Israeli elections March 2,” Habib said.

In the same vein, speaking to Al-Monitor on condition of anonymity, a Palestinian official at the Higher National Commission for the Great March of Return and Breaking the Siege said “the ongoing pressure has prompted the Israeli occupation to abide by the truce understandings and provide incentives to the Gaza Strip, including [allowing] 7,000 Gazan merchants to work in the territories occupied in 1948.”

He perceived that such a step would help the Gazan economy recover and reduce poverty and unemployment rates, which hit 75% in 2019, according to Gaza’s Ministry of Social Development. He stressed that the commission is closely following up on the Israeli commitment to easing the blockade.