Israel has been revoking the travel and import permits of Gaza merchants and importers, threatening the collapse of Gaza's economy. 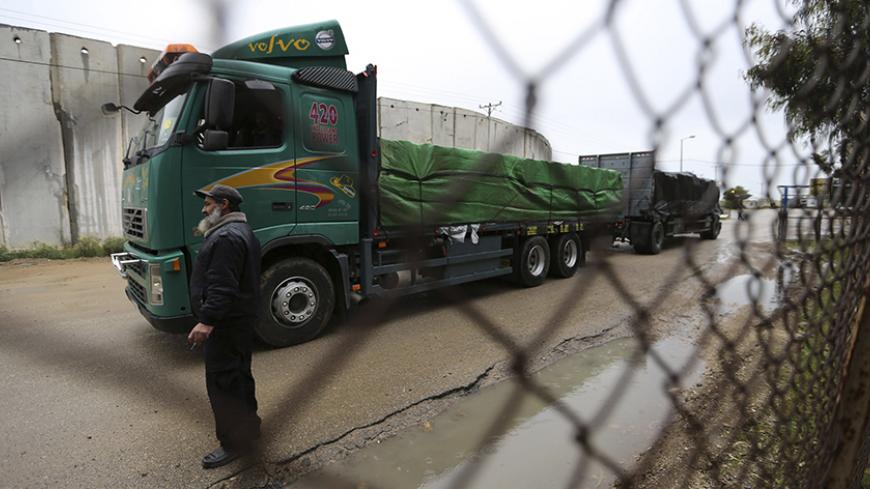 A Palestinian policeman stands guard as a truck loaded with fruits and vegetables waits to cross into the Israeli side of the Kerem Shalom crossing in Rafah, Gaza Strip, March 12, 2015. - REUTERS/Ibraheem Abu Mustafa

Hundreds of businessmen in the Gaza Strip have been complaining that the Israeli civil administration has increased the rate at which the transit permits allowing them access to Israel are being revoked, resulting in the collapse of their businesses. Maher Tabbaa, director of public relations and media at the Gaza Chamber of Commerce and Industry, told Al-Monitor that the policy could lead to Gaza's total, systemic economic collapse.

“Ever since last year, and especially since [Avigdor] Liberman entered the Defense Ministry [in May], 1,700 permits to enter Israel have been revoked,” Tabbaa claimed. “It started very slowly, but we noticed the trend over a year ago. When a merchant showed up at the Erez border crossing with a valid permit, the authorities confiscated the permit without warning and ordered him to return to Gaza. Over the last few weeks, this has turned into a flood of confiscations. Every merchant thinks that he is next and that they will revoke his permit and destroy his business, just like they did to other merchants.”

Tabbaa said that permits have been revoked for some of the most important businessmen in Gaza, including those with ties and commercial agreements with Israeli and international companies. The entire economy of Gaza, he asserted, rests on their shoulders.

Exit permits to Israel are essential to Gaza entrepreneurs, because they allow them to meet with their Israeli colleagues, check the quality of the goods they order, and negotiate import and payment agreements. Tabbaa said that without direct contact with the leading Israeli companies, it is practically impossible to run a business in Gaza. Thus revoking transit permits is, effectively, a death sentence for import and commercial enterprises in Gaza. In addition to revoking entry permits, Tabbaa said, Israel is also preventing another 200 merchants and import companies from importing goods from Israel.

Maher Habush and his brother once owned one of Gaza's largest import firms for cleaning and hygiene products. Habush said that his and his brother's transit permits were revoked a few months ago. Soon after that, Israel also revoked their permits to import goods from Israel. “We tried to understand why they put our company on the blacklist, but we couldn’t get an answer,” he told Al-Monitor.

The Habush brothers imported cleaning products from some of the leading Israeli companies and sold them in retail shops selling home supplies as well as to businesses and factories throughout Gaza. Their father had founded the business in the 1970s when he signed a commercial agreement with the Etz HaZayit company for olive oil products. Over the years, they also signed import agreements with HaMashbir (a department store chain), Galilee Chemicals (manufacturers of laundry detergent), Gadot Agro (an agronomics and agricultural biotechnology firm) and others.

When the Habushes’ import and transit permits were revoked, the owners of the Israeli companies with whom they did business tried to have the decision overturned, going so far as to take it to court. So far, their efforts have failed. The result for the Habush brothers has been devastating.

“Our business employed 30 full-time workers, as well as other workers who made their living indirectly from the company’s business,” said Habush. “Unfortunately, we were forced to fire them. The business collapsed, we have no work, and we have no hope. In a single day, it was all erased. Years of work by us and our father crashed into oblivion.”

Habush noted that he was one of the first major entrepreneurs in Gaza to have his permits revoked, and now Israel is revoking the transit and import permits of merchants who import plastic and other raw materials. He said that the import crisis and the difficulties that Israel is imposing on Gaza's largest, most established merchants are fostering another major crisis in the local economy, which is already in its death throes.

The Gaza Chamber of Commerce turned to the Economy Ministry in Ramallah, asking for help in dealing with this decision by the civil administration, but according to Tabbaa, the rate of permit revocations has only increased since then. In August, hundreds of Palestinian merchants participated in a demonstration near the Erez crossing, hoping that their calls for help would reach Israeli ears. Even now, no one in Israel seems to know or express any interest in the crisis and hardship they face.

Tabbaa remarked that even merchants whose import permits have not (yet) been revoked are accumulating steep financial losses. Goods arriving at the Kerem Shalom crossing are often sent back to manufacturing plants in Israel or to the Ashdod port without ever entering Gaza. This represents enormous losses that Gaza merchants cannot bear for much longer.

“Where are you trying to take us?” Tabbaa asked. “The merchants hurt by Israel’s decision constitute the elite of Gaza. They are people with years of seniority and experience. Almost all the owners of Israeli companies know them.”

Habush said, “We were a reliable company. We never had any problems. We always followed the rules and agreements, and we followed Israeli law. We never brought in goods that are banned from import.”

He added, “Even during the [2014] war in Gaza, we made a point of paying all our debts and commitments on time and fulfilling our agreements with Israeli companies to the letter. Do you have any idea what it is like to transfer money in wartime? That’s just the way we are. We’re business people who worry about [our] good name and reputation, but instead, they destroyed our company and the lives of dozens of our employees, who were forced to contend with unemployment.” Habush asked, agonizingly, “Where will they find work? Where?”

“The situation that we now face is the worst ever,” Tabbaa concluded. “Unemployment has reached 42% among laborers, and if we add the number of business owners big and small whose businesses have crashed, we practically reach 60% unemployment. It’s a world record. We’re screaming for help. It’s our SOS.”