A local Palestinian organization launched a project titled “No to Work in Settlements” with the aim of employing Palestinian women entrepreneurs in the Palestinian Jordan Valley, away from their work in Israeli settlements. 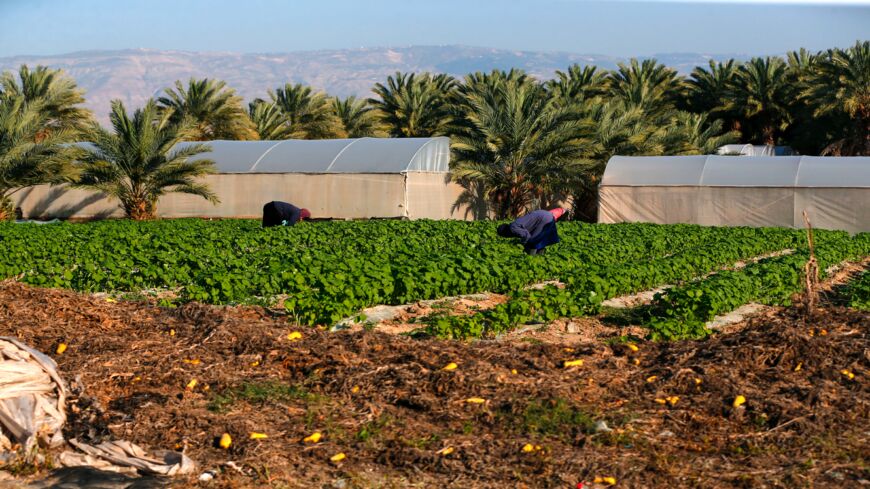 A general view taken on March 3, 2020, shows Palestinian farmers working in an agricultural field near the settlement of Mehola in the Jordan Valley in the occupied West Bank. - ABBAS MOMANI/AFP via Getty Images

A correspondent in Gaza
November 5, 2021

Hala Abdel Karim, 36, is among 42 female entrepreneurs who were selected by the Ma’an Development Center to receive a financial grant and set up their own business as part of the “No to Work in Settlements” project. She lives in the village of Zbeidat located in the Jordan Valley on the border between the Palestinian territories and Jordan.

She spends her day working on her farm in the Jordan Valley, which stretches over about 650 dunums, as she grows and picks aromatic herbs, especially basil, for export to foreign countries. This came as an alternative to her work in the Israeli settlements, which resulted from the lack of opportunities in the Palestinian labor market.

Through the grant provided by Ma’an, Hala managed to set up a greenhouse dedicated to the cultivation of aromatic plants for export to foreign markets.

“We own agricultural lands, but we do not have the financial means to set up greenhouses and purchase other inputs for cultivation. Therefore, we find that working in the settlements is a viable alternative to make ends meet,” she told Al-Monitor over the phone.

The business that Hala is working on has relieved her from the exhausting work in the settlements.

“I had to get up at 5 a.m. to go to work. We would spend more than 15 straight hours picking, weighing, packing, packaging and preparing the aromatic plants at the warehouse for their export abroad in return for about $37 per day,” she said.

According to Hala, working conditions were not favorable for women. “The Jordan Valley is one of the hottest regions in the world during summer because it is below sea level, and working inside plastic greenhouses is like working in hell. But we had no choice but to be patient because this was our only way to make ends meet.”

“I would see scorpions and snakes, among other animals, while harvesting crops, and I would try to avoid getting stung by them. I was working there without any kind of health insurance,” she said.

Today, however, Hala works on her own farm and employs about 17 other workers and three of her brothers.

Fayez Amro, 24, was also one of the grant recipients, and she is trying to avoid competing with settlement products. “This is the first time we grow seedless grapes in a greenhouse, and the crops will be harvested early in February so they are sold before the harvest season in the Israeli settlements, where they are grown on open farms,” she told Al-Monitor.

The high unemployment rate in the Palestinian labor market is what mainly leads Palestinian workers to search for job opportunities in Israeli settlements, especially Palestinian workers in the Gaza Strip who suffer from high rates of poverty due to the deteriorating economic conditions and the ongoing Israeli blockade.

Meanwhile, a report issued by the International Labor Organization (ILO) in April shows that the plight of workers in the Gaza Strip has reached alarming levels, as only one person out of five of working age is managing to find a job.

The main incentive for these workers to work inside the settlements is the high wages they receive, given that they amount to four times the value of local wages.

According to the same ILO report, the number of Palestinian workers working in Israel and settlements has been steadily increasing in recent years and reached about 133,000 workers before the epidemic, decreasing only about 6% during the 2020 coronavirus restrictions.

Sami Khader, director-general of the Ma'an Development Center, told Al-Monitor, “We have been implementing projects in the Jordan Valley for nearly 20 years, and this project aims to achieve independence for Palestinian workers from the Israeli labor market, especially settlements.”

“The humiliating practices that workers, especially female workers, are subjected to, such as low wages, sexual harassment and difficult working conditions, have prompted us to give priority to female entrepreneurs as grant recipients,” Khader went on to say.

Although Palestinian Prime Minister Mohammad Shtayyeh in February of last year called on Palestinian workers not to work in settlements, on contractors not to take any contracts there and on workers to stop going to settlements for the first time in a long time, such calls fell on deaf ears. The Palestinian Authority (PA) had launched a campaign in 2010 to put an end to work in Israeli settlements and stop consuming their products, to no avail.

Khader believes that “the Palestinian decision to prevent work in the settlements is rightful, but the PA remains unable to create strategic alternatives for workers in the Palestinian market.”

“Israel is taking advantage of the cheap, skilled labor while trying to increase the number of permits to increase the dependence of the Palestinian economy on the Israeli economy — all the while hitting its components,” Khader said.

Adly Hanaisheh, project coordinator at the Ma'an Center, told Al-Monitor, “The Israeli authorities are trying to control the Jordan Valley, and we have resorted to economic grants instead of loans for women to achieve sustainability and enhance the resilience of the population there.”

“The Ma'an Center supports such agricultural projects with the aim of helping women limit their risk-taking and helping them to market their products,” he said.