Farmers in the western countryside of Idlib turn part of their pomegranate crop into a special juice, but the local HTS-affiliated government's restrictions on exports have reduced the prices their product can fetch. 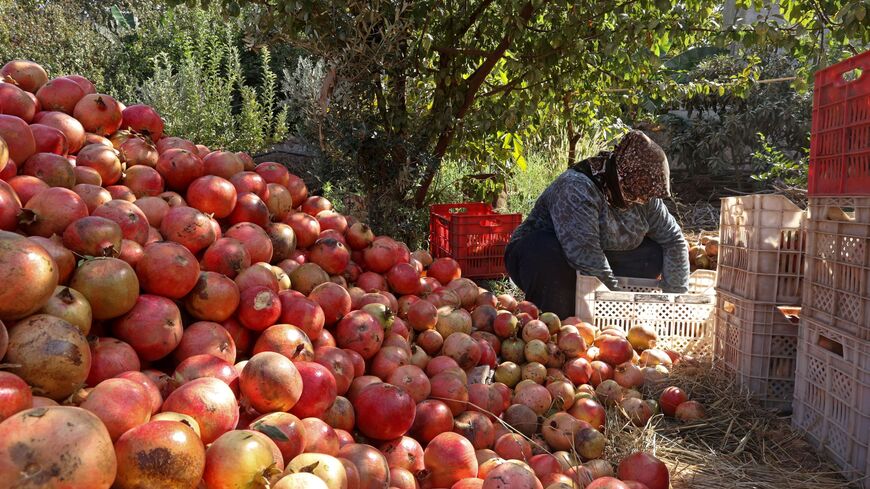 A Syrian Kurdish farmer collects harvested pomegranates at an orchard in al-Ghazawiyya village in the countryside of Aleppo in northwestern Syria on Oct. 10, 2021. - OMAR HAJ KADOUR/AFP via Getty Images

ALEPPO — The Salqin area in the western countryside of Idlib, northwest Syria, is famous for its pomegranates. The area has fertile soil and irrigation water is available, especially in the town of Darkush, on the banks of the Orontes River.

The harvest period extends through October and November. The harvesting and processing of pomegranates provide job opportunities for hundreds of people in the region and a good  income for farmers.

After selling part of the crop, pomegranate farmers in Darkush and other towns turn the rest into a thick syrup known as pomegranate molasses that has a sweet and tangy flavor. The molasses is a basic ingredient in the pantry of every Syrian home. It is added to most dishes such as grilled meat and chicken and vegetable salads.

However, pomegranate farmers in the western countryside of Idlib face many obstacles. The crop is sold at low prices locally because of the difficulty of exporting it. A kilogram of pomegranates in opposition-controlled areas in the countryside of Aleppo and Idlib is sold at three Turkish liras, equivalent to 35 cents, according to the prevailing exchange rates.

Talib al-Ahmad, a pomegranate farmer in the countryside of Salqin, west of Idlib, told Al-Monitor, “There are many varieties of pomegranate. The most popular and sought-after type is the French pomegranate, which has a beautiful shape and good taste. Other types include the Aswad, Wardi and Malissi.”

Idlib pomegranates were sold all across Syria and in Iraq and Jordan before the revolution in 2011, Ahmad said. "When the Assad regime lost control over our regions, roads were closed. Production became limited to local consumption, at very low prices, because the produced quantities exceeded the demand. This pushed us to turn the bulk of the crop into pomegranate molasses.”

Some traders who support the Salvation Government affiliated with Hayat Tahrir al-Sham (HTS) are now buying the crop to export it outside Syria, Ahmad said, but "they monopolize this trade and buy pomegranates from farmers at low prices that barely cover the costs.”

The official pointed out that the Salvation Government is now working to help the pomegranate farmers to export their crop abroad through the Bab al-Hawa crossing towards Turkey and from there to Iraq. “For example, we abolished the taxes imposed on the export of the pomegranate harvest,” he said.

“There are more than 115,000 pomegranate trees in the eastern countryside of Idlib, spread over an area of ​​about 310 hectares,” the official noted. “According to approximate estimations, this year's production is around 5,800 tons.”

The fourth Pomegranate Festival was launched Oct.  21, in the town of Darkush, west of Idlib, under the auspices of the Salvation Government’s agriculture ministry. The annual festival is held during the harvest season and features several events displaying the various types of pomegranate along with popular dishes dressed with pomegranate molasses.

A special section in the festival is dedicated to the tools used to turn pomegranates into juice or molasses, as well as drawings shedding light on the heritage of this fruit.

“The process of making pomegranate molasses includes several stages. All of them are done manually," a pomegranate farmer near Darkush told Al-Monitor on condition of anonymity. "Women peel the pomegranate and remove its small seeds. Each woman working in the workshop receives a daily wage of 20 Turkish liras [$2]. Then, the pomegranate arils are placed in large pots and mixed with a primitive electric mixer."

He continued, "Once the juice is extracted, it is brought to boil on a medium fire. When the juice starts boiling, it is left to simmer. We use wood fire, since wood is cheaper than diesel and gas. The pomegranate juice is left to simmer for more than 12 hours until it thickens and turns dark black. Then the syrup is cooled and packed in large packages weighing 25 kilograms each, ready for  sale."

Modern methods for making pomegranate molasses use machines to squeeze the fruit and cook the juice on gas or diesel stoves to boil faster and with less effort. However, most pomegranate farmers in Darkush and villages in the region still use the traditions of their ancestors. They believe that modern methods make it lose its distinctive taste.