The Gaza Strip's closed movie theaters will reopen at the end of the summer for the first feature film made by a local company. 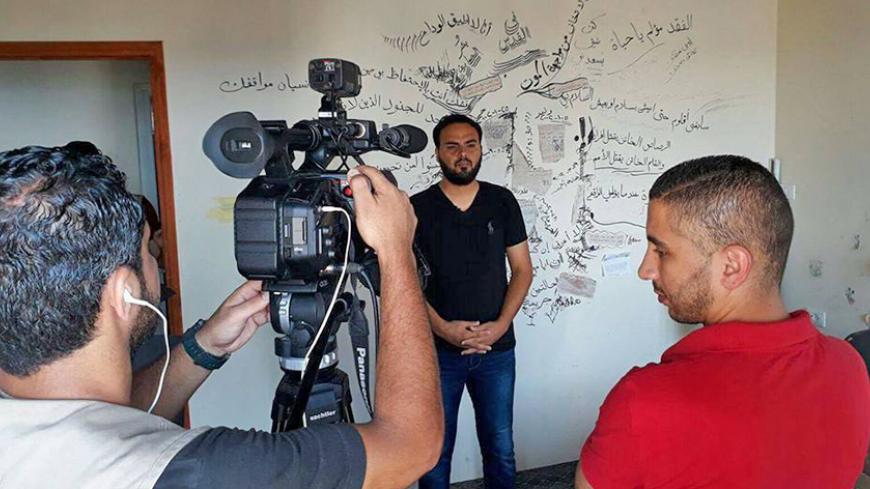 Shooting for the film "Ten Years" takes place in this photo uploaded on July 17, 2017. - Facebook/10years

GAZA CITY, Gaza Strip — "Ten Years," the first feature film produced by a local production company in the Gaza Strip, is expected to breathe new life into the dormant cinema industry in Gaza.

The film, which is about the life and challenges of a family between 1999 and 2009, depicts social issues such as unemployment, corruption and women’s rights. The film crew worked on the feature film for 10 months, between October 2016 and July 2017. In cooperation with the Gaza Ministry of Culture, movie theaters that have been closed since 1987 are set to reopen, with the first screenings scheduled for early September, during Eid al-Adha.

Alaa al-Aloul, a film producer and director at Continue Production Films, which produced "Ten Years," told Al-Monitor that the company received no external funding. The Gaza company used its own financial means to produce the film that cost more than $100,000. "Very few nondocumentary films are made by private media production companies in Gaza because businessmen do not invest their money in films,” he said.

He added, “This is the longest feature film made in the Gaza Strip, as its duration exceeds 2½ hours. None of the films produced in Gaza have exceeded 2½ hours in the last few years," noting that the recent films, mostly documentaries or historical films, were around 1½ hours.

Aloul said that the film, unlike most films about Gaza, does not focus on the political situation and the blockade, because Palestinian audiences in Gaza have become bored with those themes. Instead, he aimed to develop an original story line in regard to social and family issues and steer clear of stereotypes.

He also wanted to highlight the role of women and make a stand against male domination in Palestinian society in Gaza. The main character in the film is a woman, played by 30-year-old Aya Sultan. This in itself is a novelty, as most films produced in and about Gaza feature strong male leads.

Sultan told Al-Monitor, “This was my first venture into acting. I did not study drama or theater; I studied journalism at the University of Palestine in Gaza. But I auditioned and I was chosen to play the lead role.”

She added, “When the scenes were distributed and shot, I faced difficulties since it was my first time acting. But I overcame the challenges and played my role professionally. I play the mother of two children and the wife of a modest businessman who stands by her husband. As his wife, I support him.”

Sultan said she accepted the offer to star in this production because she thought both the plot and the character she played were innovative and highlighted a new, stronger female role.

Aloul hopes the film encourages investors in Gaza to get involved in film production, particularly since he coordinated with the Gaza Ministry of Culture to reopen movie theaters after 30 years.

Atef Askoul, the director general of arts and heritage at the Ministry of Culture in Gaza, told Al-Monitor that film production in the Gaza Strip was not flourishing because investors are afraid to lose money in this field.

He noted, "'Ten Years' is the beginning of private investment in cinema; it is a new experience in Gaza. The purpose is to reopen closed movie theaters to show the film.”

Askoul added, “Clearly there is interest in movie theaters in the Gaza Strip, especially as generations have not been able to watch any films in cinemas; they have only watched films on TV. For that reason we cooperated with Aloul to help him screen the film in theaters, and we gave him the needed permit. We also coordinated with movie theater owners to renovate and reopen the venues."

He said that several production companies have been given permits to produce documentaries and drama series, and that permits are provided to all companies that want them, as long as the production does not offend public ethics.

Askoul noted that the lack of feature films in Gaza stems from limited funds, and so production companies prefer to produce short films only.

Palestinian citizen Fouad Hamada, 38, was happy to hear that “Ten Years” was going to be shown in cinemas. Hamada remembers as a child lining up at the box office and searching for an empty seat, and he would like to experience this again.

He told Al-Monitor, “We are hungry for real cinema in the Gaza Strip. We want to be able to watch films, just like in other Arab states. It is not fair to keep the cinemas in Gaza shut until now. The bad economic situation and blockade in the Gaza Strip are not enough of a reason. It is an achievement to screen a Palestinian production in cinemas after so long.”