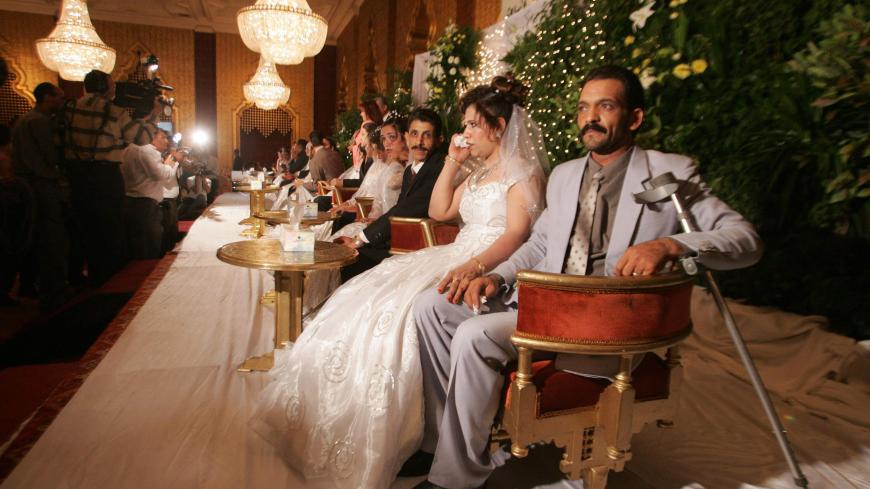 CAIRO — Young Egyptians' fear and worry about their wedding night has been captured in a daring play in Cairo. The performance calls on the public to end archaic traditions that make the first hours of marriage a nightmare for many newlyweds.

“Awal Yawm Zawag” ("Wedding Night") casts a new eye on some old traditions, particularly the ritual of displaying blood-stained sheets to a waiting audience to show that the sexual intercourse has been carried out and the bride was a virgin. The practice is common in Egyptian tradition, as in most Muslim countries.

The play was performed for Cairo audiences in the Romance Theater in early July. Critics would now like to see it staged in conservative Upper Egypt — where the play is actually set — and its producer and director would like to see it reach a larger audience on satellite TV.

There are no major celebrities among the cast, but the play nevertheless attracted large audiences, partly because the producers decided to stage the show free of charge between July 1 and July 3 to commemorate the fifth anniversary of the ousting of President Mohammed Morsi following public protests against the Muslim Brotherhood regime in 2013.

The play portrays a wedding night through the eyes of a doctor from conservative Upper Egypt who, after finishing his education in Cairo, decides to go back to his hometown and marry a local girl. Showing the man's struggles with his family and peers, the play highlights the traditional beliefs and misconceptions of some rural communities in Upper Egypt regarding the wedding night and the pressure they place on young couples. The bride and groom's families pressure them to have intercourse the first night despite their anxiety, as they want to see the bloody sheet proving that the bride was a virgin.

The young doctor struggles with the practice and desperately tries to persuade his friends and family that the request for the bloody cloth is ridiculous, outdated and stressful to both men and women. Other characters in the play recount their own experiences, their own stress on their wedding nights, their fear and even accusations that their brides were not virgins because they didn't bleed.

In real life, wedding nights have often led to tragicomic situations in Egypt's rural and uneducated communities. Some of them find their way into the papers in the form of articles about men becoming so tense about their performance that they have heart attacks or commit suicide. Women also suffer from anxiety attacks or kill themselves. Misconceptions about the wedding night sometimes lead to murders because many people link virginity to bleeding, which does not happen to every woman. A wedding night may conclude in a hospital, where the bride undergoes a "virginity test" to find out why she did not bleed or in a police station because the groom, convinced that the bride is not a virgin and that he has been “cheated,” attacks, wounds or even kills the bride.

Ahmad Salaama, an actor who has appeared in several TV series, stars as the doctor. Young actors Ayman Ismail, Batoul, Baher al-Shafei, Chahed, Ayman Hamouda, Sahar, Mohammad Rashad and Mohammad Amr also perform in the play under the direction of Hussam al-Din Salah. On July 3, the last performance in Cairo, the performance was recorded to be shown on television.

Salaama told Al-Monitor that the main character, despite his education, reflects the fears of most Egyptian young men, as he worries about both the bloody cloth and his own sexual performance. “Many married people fail to have sexual intercourse on their first night because their inexperience is coupled with fears,” he said. “The play appeals to the friends and family to respect the couple's privacy, give them space and not intervene.”

Playwright Mahmoud al-Santi told Al-Monitor that the play does not mock the traditions of Upper Egypt but focuses on some negative aspects and explores whether they can be set aside. “The play can bring about change if performed before more spectators and …in different governorates,” he told Al-Monitor.

Can a play really change attitudes toward something as sensitive and deeply rooted in Egyptian culture?

Drama critic Amro Dawara told Al-Monitor that he is skeptical, saying, “I don’t expect the play to change ideas and traditions in the targeted communities. I don’t expect a high turnout either because there aren’t celebrities in the play like Yehya al-Fakhrani, Ashraf Abdel Baqi, Mohammad Ramadan or young actors known among theater-goers like in '1980 Wenta Taleh' [1980 and Beyond].”

Ahmad Abdul Razaq Abu al-Ula, drama critic and author of several books about Egyptian theater, told Al-Monitor, “Plays aiming to change social habits should be performed before the target audience. In the case of ‘Awal Yawm Zawag,’ the target audience is in Upper Egypt and rural areas.”

Pointing out that because very few theatrical productions reach Upper Egypt, performances can have powerful effects there, adding, “People from these areas are more easily influenced by these performances. Urbanites who have wider art knowledge" view performances more critically.

Sherine Al-Rayes, a psychologist who owns a marriage counseling center, told Al-Monitor that she appreciates the play's potential to change beliefs and ideas of many Egyptians about the first night of marriage and proof-of-virginity traditions.

Azza Fathi, a professor of sociology at the University of Ain Shams, also agreed that the play may help change attitudes. Fathi told Al-Monitor, “Theater, despite its simplicity, can modify the ideas of these communities. For example, if some knew how pressure from friends and family has lasting effects on the marital relationship, they would perhaps stop pressuring couples."