As their cost of living gets higher, Egyptian couples are being forced to go without the traditional, more expensive wedding festivities. 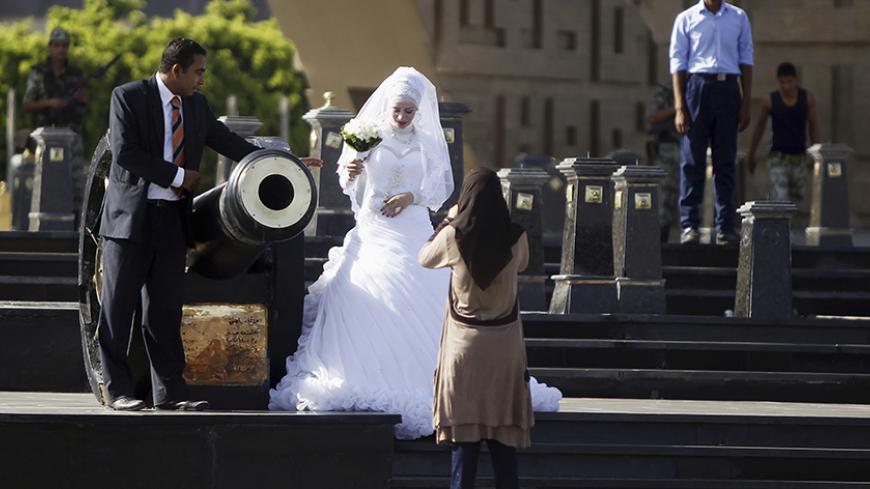 A bride and groom have their photos taken in front of the tomb of late Egyptian President Anwar al-Sadat and the Unknown Soldier monument, Aug. 11, 2013. - REUTERS/Amr Abdallah Dalsh

In a small town in the Nile Delta governorate of Damietta, an imam has been calling upon people there to keep wedding costs as low as possible to make life easier for themselves and their offspring. The residents, whose purchasing powers have declined under deteriorating economic conditions, are convinced that their imam is right.

Traditionally, bridegrooms have to buy their brides gold engagement jewelry and pay dowries. It is also customary across the country to hold a henna party before the wedding, in which artists use a paste made from dried henna leaves to paint intricate patterns on the hands of the bride.

The town of Sherbas, which has a population of 30,000, has a considerable number of unmarried men and women who find it difficult to afford marriage amid the soaring prices of electrical appliances, furniture and gold.

A group of residents are trying to help young couples keep their wedding costs as low as possible by doing away with the traditional trimmings and high expectations that surround wedding ceremonies. For example, grooms are buying less gold engagement jewelry and the various different parties associated with weddings — such as engagement gatherings and henna nights — are being cast away. The young couple sets their house with the basics, rather than expect a fully decorated house provided by their families before they start the marriage.

Ali Bedeiwy, one of the promoters of the idea, told local media outlets that its purpose is to fight costly and outdated traditions. The idea has been well received by the residents of Sherbas, as well as nearby towns in Damietta and other governorates nationwide that have seen similar drives. Cost-reduction initiatives have been welcomed in the governorates of Aswan, Luxor, Qena, Sohag, Beheira and Menoufia, all of which suffer high poverty rates.

The prices of almost all products, including electrical appliances, furniture and gold, have dramatically increased. Following the Central Bank of Egypt's decision in November to float Egypt's currency, the Egyptian pound's value was reduced almost 50% against the dollar, which in turned caused a price hike in all imported items such as household goods and furniture.

According to data released by the state-run Central Agency for Public Mobilization and Statistics (CAPMAS), Egypt’s annual urban consumer inflation rose to 29.8% in June, compared to 29.7% a month earlier.

The governorates’ imams, who have called upon ordinary citizens to make it simpler and reduce their marriage costs as much as possible, have promoted the initiatives.

Zeinab Shaheen, professor of sociology at the American University in Cairo, told Al-Monitor that Egyptians inherited their costly wedding traditions. Shaheen said that more and more Egyptians will limit and discard these practices as prices continue to rise.

According to data released by CAPMAS, there are 13.5 million single people in Egypt over the age of 30. The figure included 2.5 million men and 11 million women.

All over Egypt, more and more young people laud the trend, saying it will save people who want to marry from becoming hostages of their economic circumstances. Sara Mohsen, an unmarried 26-year-old, told Al-Monitor, “It is interesting that an economic crisis is leading to the elimination of outdated traditions and habits which are very costly and unnecessary at the same time.”