The Gaza-based women's film festival has daringly screened films addressing women's issues that are considered taboo in this conservative society, including sexuality and harassment. 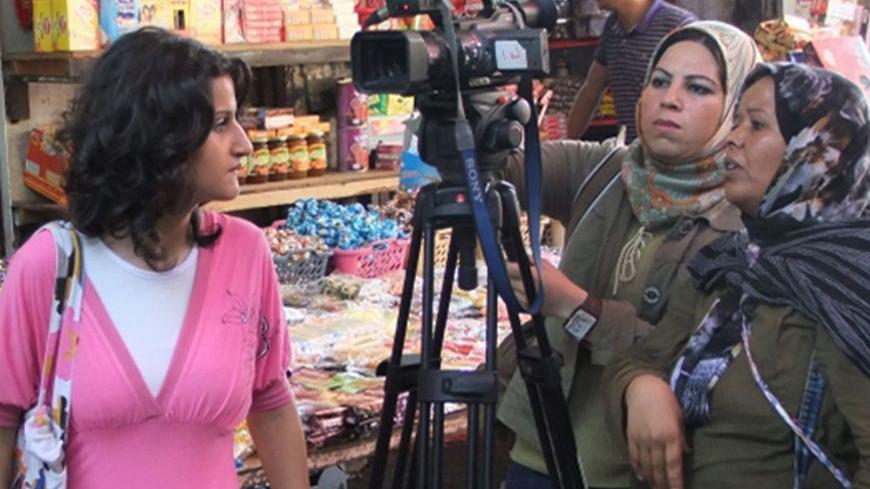 The film crew of "Where Do We Go?" shoots in Zawya market in Gaza City, July 2010. - Center for Women's Affairs

GAZA CITY, Gaza Strip — Hymens, sexual harassment and honor crimes are taboo subjects usually kept under the rug in Gaza. The Through Women’s Eyes film festival organized by the Palestinian Women’s Affairs Center was dedicated to films directed by women who addressed these delicate issues. Taking place on Oct. 2-3, the film festival was held in the Rashad al-Shawa auditorium in Gaza City. Although the quality of these works paled in comparison to featured Arab and foreign films, they were nonetheless among the most controversial.

“Red Stain” is a five-minute short feature film that looks at the wedding night through the lens of traditions in different communities. On this night, a woman is supposed to bleed as a sign of her virginity, though this did not happen for the female lead in the film. As a result, she was forced to endure her husband’s anger and looks of suspicion cast by those around her. Soon enough, the shame that had beset the bride turned into pride when, after visiting a doctor with her mother-in-law, the report confirmed that she was a virgin and that her hymen exhibited a certain elasticity requiring surgical intervention to be broken.

Rima Mahmoud, the director of the film, told Al-Monitor that many people had discouraged her during the making of the film, saying, “They warned me of presenting such a sensitive subject. The attacks began when some young men threatened to file a lawsuit against me, based on the claim that the film inflicted wrongdoings against them,” she explained.

“The film has posed serious challenges for me, but I decided to go ahead with it against all odds. I am still sad about my first film that dealt with the issue of incest, because it had been banned from another local festival,” Mahmoud continued.

Mahmoud noted that she was concerned this film might be banned as well since the committee approving the films, which is affiliated with the ministries of information and culture in the Gaza government, had taken a bit of time to give its final approval. “They omitted one scene. I had a discussion with the committee and some of its members chastised me for presenting such delicate issues.”

“It was hard to find an actress for this role,” Mahmoud admitted. Al-Monitor met with the leading actress, Islam Abu al-Said. The veiled woman seemed happy after the screening of the film, saying, “I knew many girls refused to take on this role. I, however, readily accepted it since this is a problem many women face, although it is only discussed behind closed doors.”

“When my mother learned of the idea behind the film, she reproached me for taking on something so bold,” Said added. “She tried to talk me out of the role, yet I decided to go through with it. After hearing the opinion and applause of the audience, I considered this experience to be a success.”

Harassment through the rearview mirror

Another film — “Roads” — addressed the way taxi drivers harass women. Though the film experienced some technical problems, it deals with a woman’s very real struggle with harassment, especially in its spontaneity and frequency in places such as taxis.

In the film, the veil of the woman sitting in the backseat did not deter the driver from looking at her in his rearview mirror, even though he made an effort to give passengers the impression he is religious by playing religious sermons on the radio. As soon as the other passengers stepped out of the car, he spoke disrespectfully to the woman, nearly compelling her to jump out of the car.

The film director, Sahar Fasfus, told Al-Monitor that her family encouraged her in her endeavor, since she is addressing something that is rampant in Palestinian society and which women are unable to report on. “Some have tried to downplay or not recognize the idea [behind the film], so that I might give up on it. They warned me of the criticism I would face; however, I strongly believe this issue needs to be brought to everyone’s attention,” she said.

Obstacles faced by the festival

In Gaza, film festivals are scarce. This year's film festival, however, provided the audience with a space to enjoy feature and documentary films, in addition to discussing them over coffee in the adjacent cafe during intermissions.

What was odd was that the lights were kept on in the theater, preventing a clear screening of the films. Itimad Washah, the general coordinator of the festival, told Al-Monitor, “The venue's management asked us either to separate men from women or leave the lights on. Given the hassle of asking the audience to sit in specific seats, we decided to leave the lights on.”

Washah, whose film “Harayir” was featured in the film festival, added that this is the third film festival to be held following the first in 2009 and the second in 2010. “The film festival was not held in 2011 and 2012 because of the blockade on Gaza and the difficulty of getting original screening copies into the Gaza Strip.” Washah added that some film directors were supposed to attend the film festival, but were held up at the Rafah crossing.

She explained that 21 films were screened during the film festival. Of these, five were directed by men, while the rest were by female directors from all over the world. “There were fears the film festival would be canceled, especially since the permit from the Interior Ministry didn’t come until two days prior to the opening,” Washah stated.

She conceded that festival organizers practiced self-censorship and omitted some scenes that they anticipated would be cut by the governmental committee. She said, “We did not want what happened in the 2010 film festival to happen again. Back then, the committee omitted many scenes, in one instance because the shorts a woman was wearing were too short. A full 20 minutes were omitted from the film ‘Morr wa Rumman.’”

Washah noted that one of the scenes the committee omitted in this film festival was one in which a man was massaging the back of a woman in the film “The Pink Sari,” which focused on Indian women.

“I fight to keep any films from being banned. This is why when the governmental committee expressed reservations about ‘Red Stain,’ which addresses the issue of the wedding night. We negotiated and held discussions to feature the film, which was approved in the end,” Washah said.

Asmaa al-Ghoul is a columnist for Al-Monitor's Palestine Pulse and a journalist from the Rafah refugee camp based in Gaza.