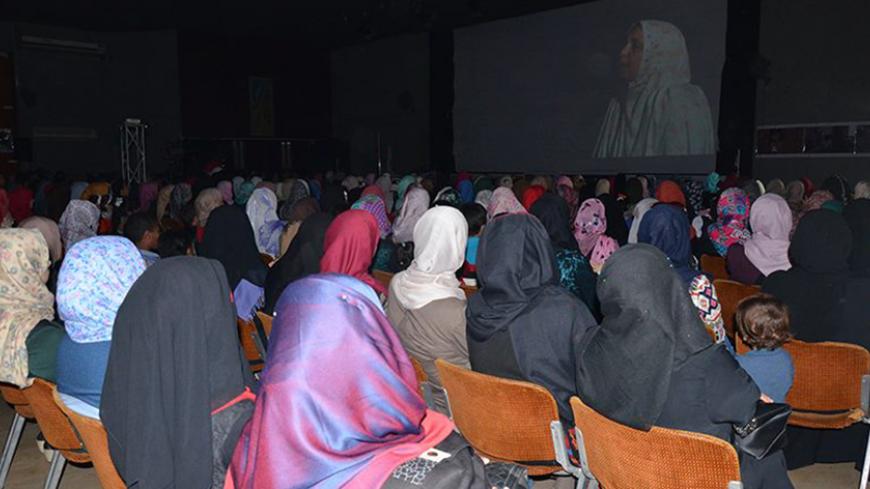 GAZA CITY, Gaza Strip — For the second year in a row, the Women's Affairs Center in the Gaza Strip organized on Nov. 3 a women’s film festival headlined "Women for Change" in which several drama films produced by the center and tackling bold topics were shown.

Hanin Kullab, 32, produced a short film called "Lailat Farah" ("A Joyful Night"), which was shown at the festival held inside Rashad al-Shawwa hall in Gaza City. The film talks about early marriage for men and women, which is a rampant phenomenon in the Gaza Strip.

Kullab told Al-Monitor, "The 13-minute film tells the story of Farah and Firas, who barely reached 15 years of age and got married based on a decision from their parents. They were faced with a reality they did not choose. The wedding night was not a typical one for them. They talked about their dreams, their usage of social media platforms like Facebook and their love for songs. They decided to rebel against their reality by standing in the Unknown Soldier Square in Gaza City holding banners that read, 'We are still kids.'"

She realized that the storyline was not new, but she made sure to tackle the topic from a bolder angle that differs from local productions. She focused on the marriage of minors by delving into the details of their wedding night, which is daring in Gaza's traditional society.

Producer Rima Mahmoud, 28, tackled a less-explored topic on camera. Her film, which was screened during the festival, reflects the five minutes that Israel grants families to evacuate their houses before shelling them during war. The families are thus torn between running for their lives or staying with their memories hanging on the walls. The film is called "Arwah Alika" ("Souls in Limbo").

Mahmoud told Al-Monitor, "This is the story of each Palestinian citizen at times of war as he awaits death at any moment while at home. There is a thin line between life and death, and five minutes is all the time that Israel gives to evacuate houses that hold most of our memories before shelling them. These five minutes reflect souls in limbo, stuck between memories and life, and only separated by destiny."

Mahmoud noted that the film reflects the suffering of Palestinians in the Gaza Strip who have been experiencing injustice in their own country and have endured the conflict with Israel. She said, "Boldness does not only concern choosing delicate topics, but also focusing on regions that have not enjoyed enough coverage."

Nine films participated in the festival, and they were produced by the Women's Affairs Center in the Gaza Strip, which specializes in women's affairs, achievements and problems, and focuses on developing their skills in all fields. All films talk about women's affairs and highlight their problems, whether social or political, and reflect their achievements in several fields.

Siham Ahmad, 25, from Gaza City, found a new kind of expression of women, their problems and creations in the festival.

She told Al-Monitor, "The diverse films that I have watched reflect the reality of Palestinian women, showing details that are often missing — spontaneously or deliberately — in the media. We rarely see this in the media or even in cinematic productions. These films do women justice in showing their skills and reflecting their problems."

Abdullah Hasanein, 35, believes these films will constitute a turning point for women's image in the media and revive interest in film productions related to women.

He told Al-Monitor, "These films will encourage producers or organizations to shift to films that reveal uncharted territories in Palestinian media, due to their boldness."

Itimad Washah, the video program coordinator at the Women’s Affairs Center in the Gaza Strip, told Al-Monitor, "The participating films in the festival advocate Palestinian women's rights and detail their suffering and the blockade imposed on them."

She added, "The festival aims at giving a realistic image of Palestinian women's rights from all aspects, whether social, economic or political. Each film carries a message for positive change in women's issues and for altering the stereotypical image of these issues in the media, like the Lailat Farah film that talks about early marriage. Films also highlight women's achievements and ability to stand out and be creative, like 'Al-Rehla' ('The Journey') documentary, which depicts the first Palestinian woman to climb the highest peak in Africa with a prosthesis."

She noted that the lack of sufficient funding to produce films and the absence of professional film cadres have impeded film production in the Gaza Strip.

This left an impact on some participating films in the festival. Mustafa al-Nabih, a Palestinian producer and member of the artistic committee overseeing the participating productions, said that some films were closer to radio work: The script outweighed the visual effects. He told Al-Monitor, "You can close your eyes and follow the story, although cinema speaks a visual language and dialogue was put to make up for the lack of visuals. Some productions ended with speeches, and this weakened them."

He noted that quantitative experience leads to qualitative changes, saying, "It is only normal for producers in the Gaza Strip to develop their storyline, because they are seeking all that is new and welcoming criticism. Besides, their experience has expanded and they are constantly in contact with people in the same field and follow others' work."

Nabih said, "Palestinian women have been working with Palestinian media companies and communicating through social media with fellow women inside and outside of Gaza working in the same field. As a result, their perspective has widened. We have budding female producers who are quickly and distinctively improving. In a short period their names will shine in Arab and foreign media, and they will win Arab and international awards."

Despite obstacles to cinematic productions in the Gaza Strip like lack of funding and artistic staff, Palestinian female producers are trying to think outside the box in their films, whether in content or form.