Palestinian directors of documentary films hope to reach Arab and world film festivals, despite the political and social obstacles they face in Gaza. 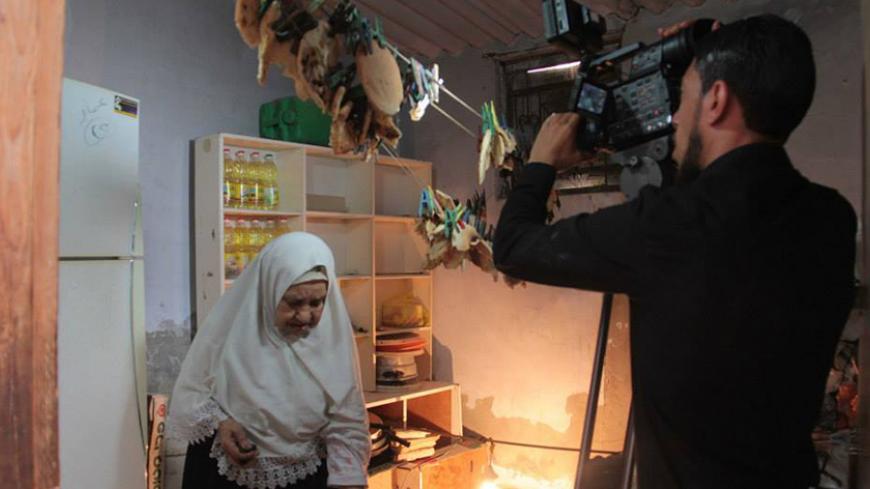 GAZA CITY, Gaza Strip — Eighty-year-old Umm Bushra hangs the bread on a clothesline and waits for it to dry. She then sells it to whoever owns chickens, and then she spends the little income — about 5 shekels ($1.29) a day — she gets from it on herself as she lives alone without a husband or son. This all plays out in a scene from a documentary film produced by a young Gazan.

Umm Bushra’s life was the theme of a documentary film titled “Bread, the Source of Life,” directed by the young Samar Abu Elouf, who participated in the 2013 United Nations Relief and Works Agency's (UNRWA’s) Clothes Line Competition held in Ramallah. The documentary placed fourth.

Abu Elouf, 32, told Al-Monitor that the movie holds a message of hope, as it depicts the insistence of an elderly lady who lives in al-Shati refugee camp, west of Gaza City, to work and spend her money on herself. The elderly lady’s hope reflects that of the young director who is seeking a sponsor for her future documentaries. She did not succeed in getting funding to produce her first documentary, relying on friends to complete it instead.

“Directors who won global or Arab awards for their documentaries face many difficulties in traveling to attending their honoring ceremonies or participating in film festivals in which their works are nominated,” she said, adding, “We face many obstacles while producing movies, including the lack of funding, the weak capacities we have and our missed opportunities to travel to the countries where the documentary film festivals take place. This is because of the ongoing closing of the Rafah crossing, while Israel continues to prevent Gazan youth from leaving through the Erez crossing.”

Young director Mohammad Awais, 22, was nominated this year in the 2015 Al-Jazeera Documentary Film Festival in Qatar for his movie “I Hope So.” However, he could not travel to participate in the festival.

The narrative of “I Hope So” revolves around a young man named Mustafa al-Far, from Gaza, who communicates with his Italian girlfriend, Linda, on social media, as he cannot visit or see her, given the closing of the Rafah crossing and the strict travel measures on the youths through the Erez crossing. He uses selfies to show her his daily life, and the photos he captures with his new cellphone reflect the major problems in Gaza, like unemployment, delayed reconstruction and destruction after the 2014 Israeli war.

“The ideas that young directors tackle express the reality of the situation in general, and their ambitions, dreams and desires are hidden in the details of the stories they tell. However, their ambitions are hampered by the tough reality, which makes the documentaries they film quite touching,” Awais said.

Director I’timad Washah, who trains directors and is the video program coordinator at the Women’s Affairs’ Center in Gaza, believes that young directors produce documentary films that reflect society. After having trained several directors, she noticed their affinity for national ideas that everybody in Gaza agrees on. Meanwhile, they avoid tackling some sensitive social issues such as honor killings, incest and sexual mutilation, to avoid negative criticism.

“The political aspect that prevails over social life in Gaza and the special social circumstances — in terms of relations between cousins and family members — that characterize this society are reflected in documentary films, which focus on one aspect: the national cause, the fight against the occupation and the struggle of Gazans. However, it is possible to deviate from the political framework and seek ideas that touch on the youths’ real problems in Gaza, such as unemployment,” said Washah.

Washah contributed to the 2013 production of a documentary film about the hymen titled “Red Spot,” and its director, Rima Abu Sobha, was the target of a lot of negative criticism. Directors who are trained by Washah face this sort of criticism all the time, because she trains them to push society’s narrow limits and seek ideas that people can really relate to.

“Documentary films are missing in Gaza, compared to the number of young directors who are trained or produce films. This is due to the absence of institutions supporting this type of art and to the lack of funding,” Washah said, adding that “young directors personally fund their documentary films. Most of those who receive funding are in contact with Western funding organizations and produce the film as part of a certain project.”

The directors of documentary films that are nominated for Arab and international festivals have to communicate with the organizers of film festivals online, because their chances to travel are rare. Many of them weren’t lucky enough to attend their honoring ceremony for awards they win, including Washah. The Spain Documentary Film Festival translated Washah’s movies on women, which will be screened in Spanish during the festival that started Nov. 17. But she could not attend the festival, as she could not get a Spanish visa.

With the weak capacities and the lack of funding and support for documentary film directors, the market of documentary films offers limited productions that are not in line with the number of trained directors who are enduring bad social and political circumstances in Gaza. Their only leeway is their thoughts, through which they can transmit their opinions to the world and aspire to a future full of opportunities.