The world’s most remote film festival featured a number of Sahrawi-made movies, encouraging young artists there and drawing attention to the Sahrawis' plight. 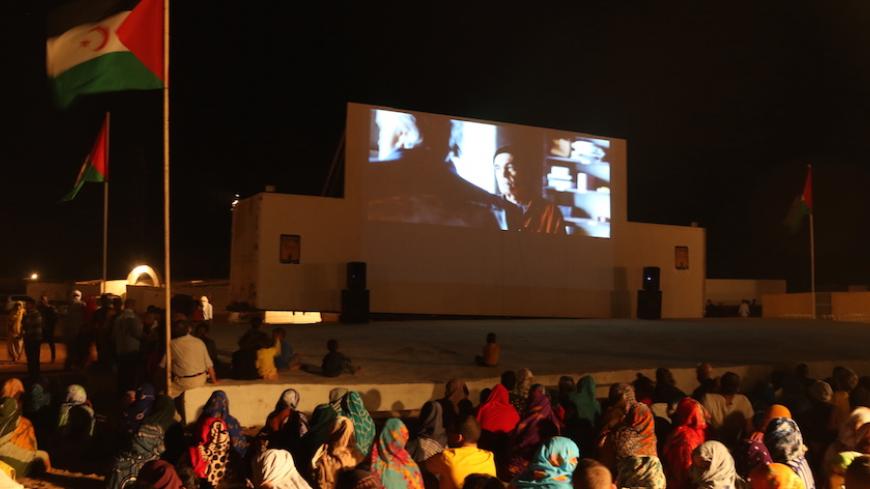 Known as the seventh art, cinema has become a platform for the Sahrawi people to share their stories in the desert refugee camps where they have lived for more than 40 years.

As dusk arrived Oct. 12, Sahrawi refugees and their guests from across the world mingled in the dusty streets of Algeria’s Dakhla camp, ready to partake in the traditional gala that kicked off the 13th annual Western Sahara International Film Festival, or FiSahara.

The event, known as the world’s most remote film festival, featured dozens of movies in a four-day screening lineup that included a strong presence of Sahrawi-made films produced in an audiovisual school the festival founded five years ago.

Omar Ahmed is the director of Abidin Kaid Saleh institution, an audiovisual school in the Boujdour camp. He first began taking photos as a hobby when he was living in El Aaiun in the disputed territory of Western Sahara. Later he joined the army of the Polisario Front, the Sahrawi liberation movement, to document the 15 years of guerrilla battles his people undertook to seek independence from Morocco.

Ahmed remembers he was part of a group of young Sahrawis, led by Saleh, working for a Spanish newspaper Saleh founded called La Realidad (Reality). This was before Saleh started his career as the first Sahrawi photographer to cover the Western Sahara war.

Ahmed learned about cinema when he traveled to Cuba to specialize in cinematography in 1981. Then, he returned to the Polisario-controlled zone in 1983.

“I still reminisce about those moments, which seemed like a fiction movie, when Sahrawis [in off-road vehicles] chased Moroccan tanks. If I had not been there, I would not have believed such scenes,” he told Al-Monitor, describing the courage of Sahrawi soldiers.

According to Ahmed, Sahrawi cinema has thrived since 2003 when FiSahara was first organized in Smara camp, the biggest of five Sahrawi camps in southwestern Algeria.

“It opened doors we didn’t even know existed. We received very famous actors we did not even know, and they put the Sahrawi issue in the spotlight, including Javier Bardem, who was hosted by a Sahrawi family” in 2008, Ahmed told Al-Monitor.

After Bardem visited the camps, the Spanish actor made a documentary called “Sons of the Clouds.” The film presents the issue of Western Sahara, a former Spanish colony, to a wider audience and includes testimonies of several figures who have served as UN officials on the Sahrawi case.

This year, Spanish actress Clara Lago presented the closing ceremonies. Lago told Al-Monitor the festival was an extraordinary experience and she was amazed by the hospitality she was shown.

This year, Brahim Chagaf received the White Camel, the award for the best film at FiSahara. Chagaf told Al-Monitor he could not express how happy he was with the award. His film, Leyuad, explains how Sahrawis love their land. It is a story of three old men who cross more than 1,200 miles to visit Leyuad, a mountain that represents a historical heritage for Sahrawis.

Leyuad is a cave with ancient drawings and is a place for Sahrawi nomads to stay. It has also been known as a place for jinn, or evil genies, because there are some anecdotal stories of strange sounds heard there at night. Others say people who lived there used to interact with jinn in a normal way like any other human beings.

In August, Chagaf also participated in the African Film Festival in Lausanne, Switzerland. When asked what motivated him to choose this art, Chagaf said, “I wanted to learn how to make my people’s situation visible and keep it from falling into oblivion.”

Chagaf is a graduate of Ahmed’s school, and Ahmed said that founding a Sahrawi cinema school was the most important step he has taken so far.

“I am really optimistic about the future of Sahrawi cinema. We now have dozens of filmmakers and are participating in international film festivals around the word,” he said.

For Taher Mulay Zain, a student at the film school, cinema is a heritage he must preserve. His late father was a photographer. While reviewing his father’s archive and looking at pictures of moments his father had shared with him, Zain fell in love with cinema and realized it had to be an essential part of his life. “I realized that filming is in my blood and I could not resist it,” he told Al-Monitor.

Zain traveled to Boujdour to pursue his ambition to become a filmmaker. After years of hard work in school and at home, his perseverance is paying off. His film “Memories in Mind” was chosen for screening at this year’s FiSahara. The film focuses on how a mother is imagining bad things will happen to her child who always accompanies his father, a butcher, to work.

“I wanted to highlight how caring a mother is for her child,” he told Al-Monitor.

However, Zain has not yet been unable to convert his work into digital material for use in future projects.

Azman Mohamed Salem, like some other students, said he didn’t even know there was a cinema school in the Sahrawi refugee camps until he attended FiSahara and saw a workshop for production.

“I liked the stuff that they were doing and wanted to learn, so I came to the director and learned that it is a two-year course, and I decided to take it,” Salem told Al-Monitor.

Salem has produced a film on the devastating floods that hit the Sahrawi refugee camps a year ago. This idea came to him as he was visiting a tented elementary school when a sand storm hit. The sound was so frightening, he wondered how anyone could study in such conditions. Salem’s short movie was included in this year’s festival as part of a project to encourage Sahrawi production.

The considerable interest in filming among youth spurred Lafdal Salem to leave his job as a mechanic to explore what it is like to tell his people’s story. He immediately chose to address social issues that he identifies as fake barriers. At FiSahara, he presented his work “Daniela, the Sahrawi Girl,” which tells the story of a disabled Sahrawi girl who overcame social challenges and integrated with society.

“I wanted to show her example as evidence that success depends on the person, not prejudices from other people,” he said.

It appears cinema has been granted a reserved seat within Sahrawi society, but other obstacles overshadow this industry as it undergoes difficult financial times. Funding from nongovernmental organizations (NGOs) usually goes to basic needs.

“Our problem is that most NGOs we have here think that bread and aspirins are enough for refugees,” Ahmed told Al-Monitor. His school is forced to function as a center for both training and production, which he says is “too much to handle in one place.”