Why Sahrawi refugees don't count on census to provide relief

Some international parties are pushing for an independent census regarding the number of Sahrawi refugees in Algeria, but some in the camps say they have reasons to be opposed. 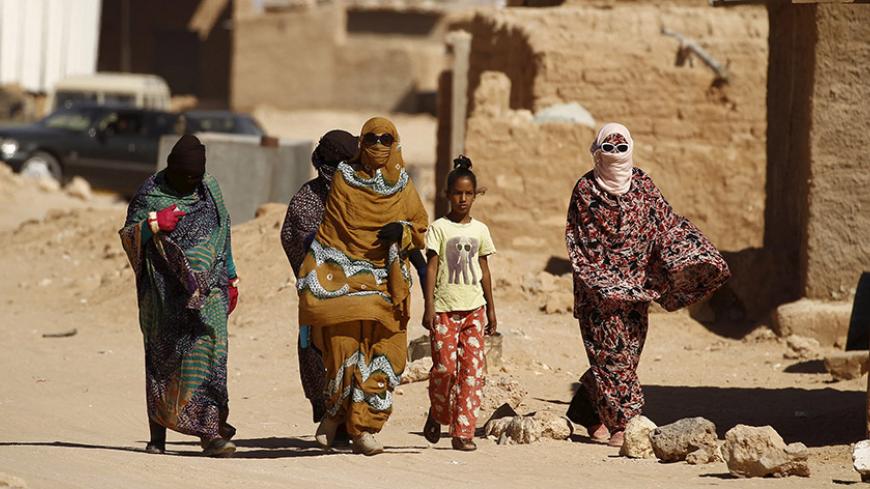 Indigenous Sahrawi women walk through al-Smara desert refugee camp in Tindouf, southern Algeria, March 4, 2016. Five camps near Tindouf are home to Sahrawi refugees from the disputed region of Western Sahara; the numbers of refugees is in dispute. - REUTERS/Zohra Bensemra

TINDOUF, Algeria — The international community is pushing for an independent census to determine the number of Sahrawi refugees living in Algeria, but the effort is meeting considerable resistance.

Estimates of the number of Sahrawis — the indigenous people of the Moroccan-occupied territories in disputed Western Sahara — living in Algerian camps vary greatly. The Sahrawi political-military movement Polisario Front places the figure at 160,000. Morocco, which controls most of the disputed territory in which the refugees once lived, says Algeria is sheltering at most 50,000 refugees.

An accurate count needs to be established so countries that contribute aid know how much is actually needed amid allegations that Algeria and the Polisario Front have inflated the need and are embezzling excess aid. The Polisario, on the other hand, says Morocco is low-balling refugee numbers to undermine their case for an independent state.

The Polisario Front declared a state in the disputed North African desert territory that it calls the Sahrawi Arab Democratic Republic (SADR) in 1976. Morocco controls more than 75% of the area. Algeria allows the front to administer the refugee camps.

The census dispute revolves around who would do the counting. Morocco is pressuring Algeria to allow the United Nations High Commissioner for Refugees (UNHCR) to conduct the census. But Algeria appears unwilling to circumvent the Polisario Front's system of governance, ministries and administrative resources. The Polisario Front already has a statistics database in Rabuni, the administrative center of the camps.

In addition, SADR was a founding member of the African Union in the early 1980s. As an ally, Algeria is reluctant to marginalize it by bringing in an international organization to conduct a census.

The debate is heating up as international pressure steadily grows for a precise count.

European officials have been increasingly vocal about the need for a recount since the release last year of a blistering report by the European Union’s fraud watchdog accusing Algerian and Polisario Front officials of embezzling vast quantities of European aid over many years. And Moroccan allies in the US Congress this month slipped language in the pending foreign aid bill urging Secretary of State John Kerry to get behind calls for a census.

The refugee population definitely has been rising in the camps near Tindouf. Most camps have been expanded and the birth rate has been increasing slightly. The average family consists of four to five members. But the Polisario Front can’t prove this to the satisfaction of the international community without consenting to an independent census.

The United Nations has not yet organized any referendum. If it moves to restrict its aid, the Sahrawis are likely to see it as a conspiracy to get them to give up their goal of an independent state by starving them.

"It would be a policy to make us kneel as refugees in need of food, not as a people with a just cause,” Ahmed Mohamed, a young refugee living in the Boujdour camp, told Al-Monitor.

Morocco also claims the Polisario Front's population figures include people from Mali and Mauritania in the camps. According to the president of the Sahrawi Red Crescent, Buhubeini Yahya, there are no Malians in the camps. Yahya also told Al-Monitor that when the UNHCR conducted a pre-registration process in 1999 based on a United Nations Mission for the Referendum in Western Sahara (MINURSO) list of eligible voters in the planned referendum, no Malian or other non-Sahrawi foreigners were included on that list. Regarding Mauritanians, there are ties between Sahrawi and Mauritanian families because they share the same Hassan culture, so Sahrawis of Mauritanian origin form a tiny minority.

The Sahrawi people have a long history with the word “census.” It was first introduced during the Spanish colonial era when a referendum was to take place in 1974. At that time, the Spanish estimated the Western Sahara population to be 74,000.

However, that number is quite inaccurate because of political machinations. When Spain was ruling Western Sahara, it created a pro-Spanish movement that included only its supporters in the census. Sahrawi nomads who formed the majority were excluded.

Because of those deficiencies, a second census was organized as part of a referendum to allow the Sahrawis their right of self-determination in 1991. The UN at that time estimated the number of eligible voters at 81,000.

The census issue is raging even as the outlook for a peaceful resolution to the conflict appears as dim as ever.

As most of the UN Sahara mission’s staff has left after being expelled by Morocco in March, the UN is stuck with working to reconcile with Morocco while calming down the front. Morocco has succeeded in turning the UN goal from reviving negotiations to just keeping its mission on the ground.

While Morocco and the Polisario Front play their cards, the people of Western Sahara await the outcome. Little change is expected, especially not until the Polisario Front elects a new leader July 9 following the death of Secretary-General Mohamed Abdelaziz on May 31.

Therefore, it doesn’t look like there will be any census taken in the near future. Indeed, the sides involved in the conflict haven’t sat at the same table in more than eight years.

Maintaining the status quo is temporarily providing a peaceful environment in the region. While changes take place in most conflicts, the Western Sahara stays frozen without much effort to solve the issues.