Why Sahrawis see more hope in war than in peace

Sahrawi leaders are growing ever-more impatient — and becoming more vocal about it — as little has been accomplished in the 25 years they have waited peacefully for change. 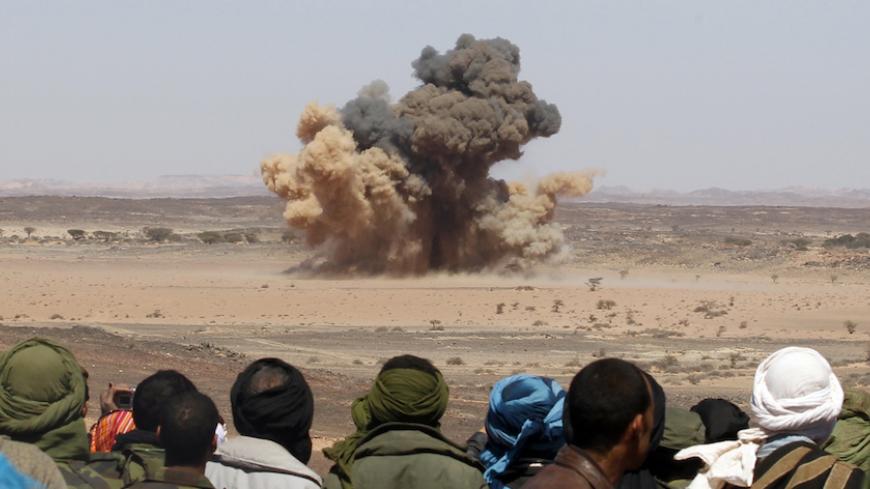 Sahrawis watch a mine explode during a demonstration organized by officials from the Saharawi Arab Democratic Republic to show the hazards of mined territory near Tifariti, in the Sahara Desert in southwestern Algeria, Feb. 28, 2011. - REUTERS/Juan Medina

TINDOUF, Algeria — After evaluating 25 years of peace, Sahrawi officials and some civil society players agree that armed struggle is the only option they can depend on to reach their goal of independence.

Sept. 6 marked the 25th anniversary of the United Nations-sponsored cease-fire agreement in Western Sahara between Morocco and the Polisario Front, the Sahrawi independence movement. The peace accord was supposed to be followed by a referendum in which the Sahrawis would choose their system of governance from three options: integration with Morocco, autonomy or independence. But the planned vote was canceled after Morocco refused to allow any process that would include independence as a choice. The dispute is still ongoing, with continued tension.

Bachir Mustafa Sayed, the former Polisario Front foreign minister and the current political adviser for Brahim Ghali, the secretary-general of the Sahrawi liberation movement, was a member of the Sahrawi delegation that signed the cease-fire agreement.

At a Sept. 7 discussion panel held in the Rabuni camp in Tindouf, participants reviewed the Sahrawis' status after 25 years of peace. Sayed shared what his thinking had been at the time of the signing of the treaty. He described the situation back then as if the Polisario Front, during the armed struggle, was aboard a dinghy with no knowledge of when the weather might change or where the tide would take it. Meanwhile, the UN represented a large ship in the sea offering them aid.

“I told them then that they could rope their boat to the UN, but to be careful and expect that [the rope] could be cut or detached at any moment.” That is what has happened, Sayed told the gathering, which Al-Monitor attended. The current stalemate has left the movement dead in the water.

For 25 years, the UN’s efforts have been fruitless for the Sahrawis as they wait for the promised referendum. However, other factors have recently put their cause in the spotlight — for example, in March, Morocco expelled the UN Mission for the Referendum in Western Sahara from the Western Sahara territory. The incident caused temporary tension that was contained once the UN Security Council voted to restore the mission.

Even so, another episode of escalation began recently when Morocco decided to cross its military wall that divides Western Sahara to build a road in the disputed territory on the borders with Mauritania. A UN confidential document obtained Aug. 29 by The Associated Press said the move was a violation of the cease-fire agreement. On the other side, the Polisario Front deployed an estimated 32 personnel to the zone. Sayed said such a decision “was very strategic and has shown that the front is self-reliant, reflecting a strong will.”

Mohamed Lamine El Bouhali, the former defense minister of the Sahrawi Arab Democratic Republic (SADR), the state the Sahrawi declared in 1976, also spoke during the panel discussion. El Bouhali confessed that signing the peace treaty was a mistake for the Polisario Front.

“Let’s be objective enough to see what such a cease-fire has given us. We should have continued the armed struggle until we liberated every single span of Western Sahara,” he said.

El Bouhali noted that SADR even gained membership for itself in the African Unity, now the African Union, during the mid-1980s “when Sahrawi soldiers were fighting in the battlefield.”

It is clear that the former military commander does not believe in the ongoing peace process. In addition, he even challenged his colleagues in the leadership to prove him wrong.

“I want those who agreed on the cease-fire to prove that their claims were right. We were victims of miscalculated steps,” El Bouhali said.

With stunning frankness, El Bouhali said he still remembers a March 2000 meeting with then-UN envoy to Western Sahara James A. Baker III, alongside then-SADR President Mohamed Abdelaziz. According to El Bouhali, Baker told them, “If you can take up arms again, there is nothing better than that for you, and if you cannot, then accept what we offer you.”

El Bouhali continued, “Accepting the Baker plan was stupidity.” The Baker plan was designed to enable Morocco to govern Sahrawis, the indigenous people of Western Sahara, for five years, then to organize a referendum based on a UN resolution of the Sahrawi people’s right of self-determination as a people of a non-self-governing territory.

“If Morocco did not want the Sahrawi people to decide on their political future while fighting and with deadly resistance, why would it accept it when [Sahrawis] are stripped of their weapons and live under its control?” El Bouhali said, smiling at his audience in the Rabuni camp.

Perhaps this logic is what makes most youth in the Sahrawi refugee camp believe that their people’s quest for independence can only be obtained by force.

Musa Salama, 27, lives in the Ausard camp in Tindouf. Salama is also evaluating the value of war versus peace.

“Our accomplishment during war was an international recognition of our right of self-determination, while there were temporary victories such as the Gdeim Izik [protest camp] in this long 25 years of peace,” he told Al-Monitor.

“I will fight within Sahrawi popular bases to resume the armed struggle, embodying my will for freedom,” Salama added.

As time passes, today’s frozen status of the Western Sahara question is overshadowing its people’s belief that any change will come through a third party such as the UN, which has been supervising this case for such a long time.

At 25, Mahfoud Bachri is roughly as old as the peace agreement. He perceives that the lack of any solution is because of the nonviolence policy, which the Sahrawi resistance has observed too well. “The Western Sahara plight has not been resolved yet because it is not considered an emergency. Unfortunately, we are in a world that listens to violence only and turns a blind eye to peaceful fights,” Bachri told Al-Monitor.

Such thinking comes as a result of the hard conditions at the camps, where youth are keen to change things themselves and not wait the rest of their lives for the unknown.

It is remarkable that high-ranking officials such as Sayed and El Bouhali held an open discussion without any restraints and even publicly called for the resumption of war, as El Bouhali frankly said in a room full of journalists, “Sahrawis, I want to tell you that no one is going to give you anything. It is your cause and you should fight for it.”