Why some in Western Sahara oppose $1 million US grant

The Obama administration is planning to approve a $1 million grant for civil society organizations in Western Sahara, but many Sahrawis have concerns about the move. 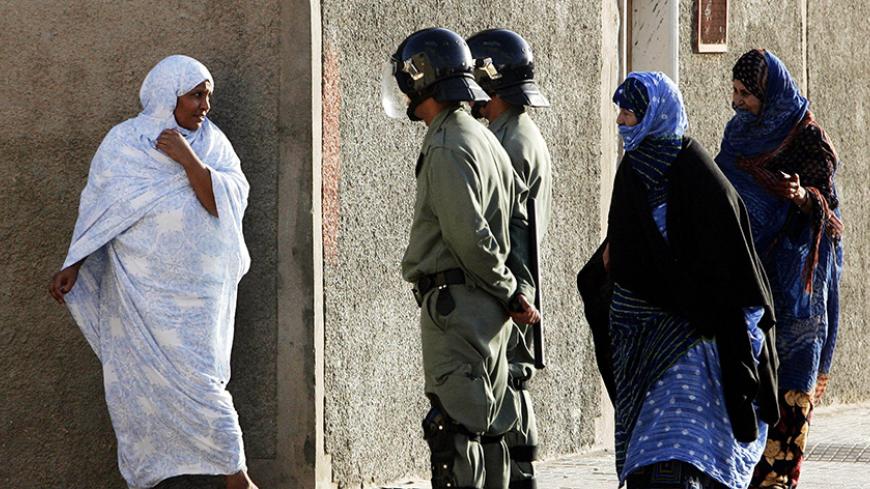 Women walk by Moroccan police, deployed to crack down on Sahrawi protests in favor of self-determination, on the streets of El Aaiun, Western Sahara, Nov. 6, 2005. - REUTERS/Juan Medina

TINDOUF, Algeria — Western Sahara is the only African non-self-governing territory. It is often called Africa’s last colony, and the territory sparks controversy easily. For example, the African Union recently condemned the Crans Montana Forum on Africa, whose slogan is “Committed to a More Humane and Impartial World,” for meeting in the city of Dakhla, which is under Moroccan control.

Now the United States is drawing fire. President Barack Obama's administration is planning to approve a $1 million grant for civil society organizations in the region. Meanwhile, much of the Sahrawi indigenous population lives in refugee camps in southwest Algeria, waiting in exile for a United Nations referendum on independence promised a quarter century ago.

Al-Monitor spoke about this topic with Stephen Zunes, a professor of politics and international studies at the University of San Francisco, where he chairs the Middle Eastern studies program. “Pro-Moroccan elements in Congress have been putting enormous pressure on the Obama administration to end its prohibition against sending US foreign aid to Morocco in the occupied Western Sahara. They recently passed legislation, against the wishes of President Obama, requiring the State Department to allow the aid to be used in the territory,” he said.

Zunes is also a co-author of the book "Western Sahara: War, Nationalism, and Conflict Irresolution." According to him, Obama recognizes that sending aid directly to the Moroccan government for “so-called economic development in Western Sahara would just strengthen the occupation.” So Obama is hoping that aiding civil society groups could empower Sahrawis themselves and assert their political rights, Zunes said.

The State Department is offering the grant through the Near Eastern Affairs bureau’s Middle East Partnership Initiative (MEPI). The group specifically moves aid money through nongovernmental organizations instead of through foreign governments.

“The Sahrawis are not concerned by such a program. The only way to implement it is by organizing it with the settlers or the people on the Moroccan payroll,” he told Al-Monitor.

The State Department has already announced that the grant will be awarded for “boosting civil society rather than promoting the kind of economic development long sought by Morocco,” he said.

“In a simple sentence: This program is not welcome in the occupied territories.”

When asked for his thoughts on that statement, Said responded angrily: “Which local governments? The local occupation forces? There is no legitimacy to any activity in the occupied territory, and be assured that the genuine Sahrawi civil society will not be part of such a ‘program.’”

He added, “It is just a loss of taxpayers' money that will not have any effect on the Sahrawi society, because no one will be part of it.”

Adam Vanoord is a US citizen who has been running an English school in the Sahrawi refugee camps for three years. He told Al-Monitor, “I think with such grants you are forcing the people of Western Sahara to acknowledge a government that is not their own.”

The United States also granted more than $4 million to Sahrawi refugees in Algeria after floods hit their camps in the fall, but the assistance was channeled through the UN High Commissioner for Refugees.

Jira Mokhtar, who works for a nongovernmental organization in the camps called NOVA supported by Oxfam International, also doubts the grant money will reach the right people.

“Morocco’s intention is not strengthening the Sahrawi civil society; its intention is to legitimize its presence in Western Sahara through such grants,” she told Al-Monitor.

Also doubtful is Mohamed Lamin, who was born in the Moroccan-occupied territory of El Aaiun and recently moved to the camps. “Such awards are to be directed to the Moroccan public treasury, and the Sahrawis are not going to benefit from them,” he said.