High divorce rates in Egypt have prompted Dar al-Ifta and the two ministries to organize courses for prepare young couples for married life. 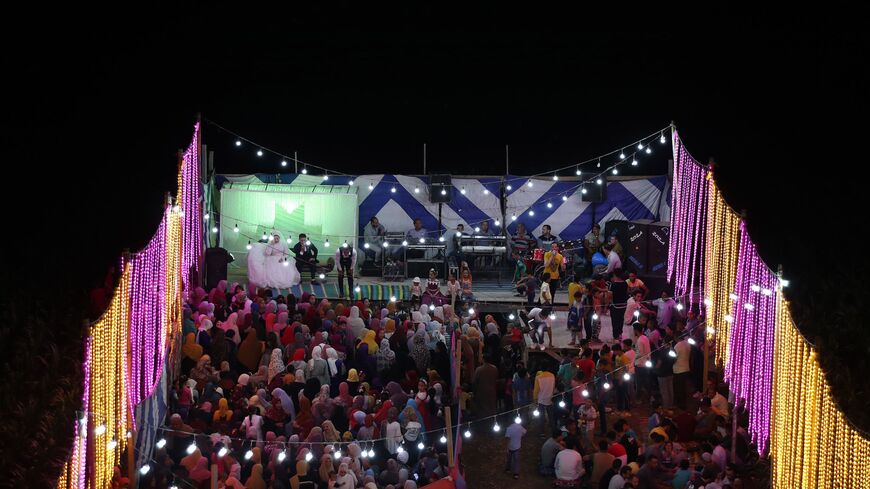 A bride and a groom sit on a stage as a band plays music during a traditional wedding celebration in the village of Shamma in Egypt's northern Nile Delta province of Menoufia on Aug. 21, 2020. - MOHAMED EL-SHAHED/AFP via Getty Images

CAIRO — Egypt's Dar Al Iftaa will now offer training courses for those who are about to get married. The effort, in cooperation with the Ministry of Social Solidarity and Al-Azhar Al-Sharif, is designed to combat the rise in divorce in Egypt.

Egypt's Grand Mufti Shawki Allam said during a symposium on the role of youth in nation-building at Suez Canal University on Nov. 2, “Dar al-Iftaa, aware of the danger of early divorce, is implementing a number of initiatives to tackle this phenomenon, including courses for couples wishing to get married. Such courses do not cover the legal aspect alone but also tackle psychological and social aspects. We also cooperate with the relevant ministries such as the Ministry of Solidarity.”

Allam added, “We opened the Marriage Counseling Center to tackle problems facing married couples and there is a joint committee of psychiatry specializing in Sharia.”

On Oct. 25 the Egyptian Ministry of Awqaf launched its Sakan wa Mawadda (Housing and Affection) initiative to educate young engaged and married couples on "family jurisprudence and the rights of spouses" as well as

Magdy Ashour, adviser to Allam, explained in televised statements Oct. 28, “Dar Al-Iftaa hears about 5,000 divorce petitions a month, but only about five actually materialize as the Family Guidance Committee in Dar Al-Iftaa manages to solve problems between spouses following consultation with a sheikh and a professor of psychiatry and reproductive health.”

Ashour said, “There are several reasons that lead couples to file for divorce. Chief among these are social networking sites, which create estrangement and alienation between couples, who instead of communicating with each other, find themselves hooked on their phones.”

He went on, “Other reasons that are leading to divorce in Egypt include economic issues, inequality between spouses and relatives’ interference in married life.”

The Egyptian official mentioned that Malaysia issues marriage permits but explained, “Marriage permits in Egypt would not be within the jurisdiction of Dar Al-Iftaa, as it is up to the parliament and the government to decide on such matters.”

In 1992, former Malaysian Prime Minister Mahathir Mohamad established centers to prepare couples headed for marriage and marriage permits for those who pass special courses. The program reportedly contributed to a decrease in the divorce rate to 8% in 2000, compared to 32% during the 1980s and 1990s.

Amna Nasir, a professor of Islamic philosophy at Cairo’s Al-Azhar University, praised the initiative to Al-Monitor, saying, “Such a step will address a lot of the problems facing couples and leading to the disintegration of families.”

Nasir blamed “preoccupation with social networking sites" for the high divorce rates, as parents who are often "too busy to teach children how to preserve and maintain marital life.”

Samia Khodr, a professor of sociology at Ain Shams University, also expressed support for such initiatives, telling Al-Monitor that the family is the foundation of society. Khodr called on the Egyptian government to focus on human relations as much as economic and financial considerations.

She said, “These courses will significantly contribute to the decline in divorce rates in Egypt,” but stressed the need for the courses to consistent and academic as well as religiously centered, bringing together "scholars and professors of psychology and sociology to take part in such training courses alongside the clergy.”