Two members of parliament have caused an uproar for suggesting virginity tests be given to female students. 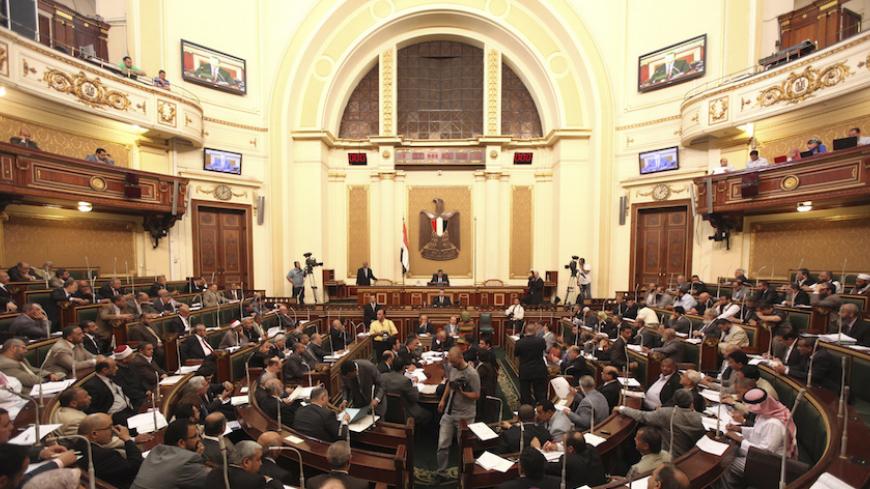 A general view of the session of the upper house of the parliament in Cairo, June 10, 2013. - REUTERS/Mohamed Abd El Ghany

Egyptian member of parliament Elhami Agina made a proposal late last month to subject university female students to periodical virginity tests as a condition to be admitted to college or move from one academic year to the next. His proposal was met with wide rejection despite his saying that this would stop the spread of a practice known as customary marriage among high school and university students in Egypt.

Customary marriage — also known as nikah 'urfi — is a traditional form of marriage within Sunni Islam that does not require a contract to be officially registered with state authorities. Such marriages have been subject to criticism in the past for being seen as a means for couples to have sex within a legal framework while not going through the traditional steps of marriage.

Two days after he made his controversial statements, Agina backed down on his proposal and apologized during a phone call with an Egyptian satellite TV channel. However, member of parliament Yusry al-Maghazi told a newspaper that he would submit a new bill to parliament requiring the state to impose a virginity test on university and technical secondary school female students.

Agina’s proposal and Maghazi’s support prompted several government bodies and human rights organizations to submit notices calling on Egyptian Attorney General Nabil Sadeq to lift Agina’s immunity from prosecution and refer him to criminal court. The notices indicated that the lawmaker's remarks calling for the imposition of virginity tests would pave the way for an indecent assault on women and fall under the crime of defamation under the Criminal Code.

Ramadan Batikh, a constitutional law professor at Ain Shams University, told Al-Monitor that Agina’s and Maghazi’s remarks gravely breach the Egyptian Constitution, stressing that if the parliamentarians’ immunity was lifted, they could face charges of defamation and violation of the constitution.

Under Article 60 of the Egyptian Constitution, the human body is inviolable. Any assault, defilement or mutilation thereof is a crime punishable by law. Also, Article 99 states that any assault on the personal freedoms or sanctity of the life of citizens is a crime with no statute of limitations for both civil and criminal proceedings.

Asked about Agina’s referral to the parliament’s Ethics Committee for interrogation regarding the statements he reportedly made, Batikh said Agina will face a penalty that the General Committee in the parliament will decide upon as soon as the interrogation is over. Agina could face sanctions ranging from his not being allowed to attend parliament sessions for a full term (at least nine months) to his not even being allowed membership in parliament.

Lawyer and human rights activist Intisar al-Saeed, the director of the Cairo Foundation for Development and Law, said that the proposal is an insult to Egyptians as it shows that members of parliament are drifting away from their normal legislative and oversight role within the limits of what is guaranteed by the constitution and the law.

Saeed told Al-Monitor that while members of parliament are paid by the people's taxes in exchange for legislative and supervisory work, they are coming out with proposals that disturb voter confidence. She stressed that this proposal has nothing to do with the constitution or the law and shows that the voters in Egypt need to elect people who have clear political platforms.

Saeed said that it’s a cultural thing in Egypt to establish a link between a girl’s chastity and her virginity before marriage but stressed that disclosing a girl’s virginity is tantamount to an assault on her body, regardless of the goal behind it.

She added that “customary marriage is not a crime under the law, and the constitution does not prohibit girls who are customarily married from their right to education.”

While Saeed said that no criminal sanction is imposed on people who have a customary marriage, she said that the proposal of the members of parliament to impose virginity tests on female students is clearly biased against young women, as it overshadows the fact that marriage is between a male and a female. Saeed added that state institutions ought to perform their role in raising awareness against customary marriage in order to limit its spread instead of insulting and denying young women their right to education.

According to a research paper prepared by a professor at the Faculty of Law at the University of Alexandria and published on the official website of the National Council for Women in 2012, customary marriage is a marriage that is not documented with the knowledge of a competent officer and it is legitimate if it meets the legitimate conditions and components, but is not official. This kind of marriage is common due to poor economic conditions that make young people unable to afford the cost of marriage, while some families impose harsh financial conditions on males, prompting them to resort to customary marriages without the knowledge of their wife's family in order to force them to approve of the marriage without conditions.

The paper stressed that the Egyptian Personal Status Law deprives women who are in customary marriages from claiming any of their legitimate or legal rights arising from the marriage contract, except for the right to divorce, to dissolve the customary marriage or to prove child lineage.

Educational expert Kamal Moughith agrees with Saeed that state institutions must commit to educating young people about the consequences of customary marriages, especially given that it is difficult to prove such a marriage occurred if one of the two parties disavows it. Add to this the lengthy legal procedure to prove their children’s lineage. Moughith added that the main reason behind the spread of this phenomenon among college students is their lack of confidence in the future in light of the current economic conditions.

Moughith believes that members of parliament ought to rearrange their priorities. He said that Egypt is filled with dozens of political, economic, social and educational problems that beset society as a whole, yet some legislators propose imposing a virginity test on girls instead of finding a way to address these problems and play their proper legislative role.

Moughith said what is required is a “law criminalizing customary marriages, not subjecting girls to periodic virginity tests.” He emphasized that the role of the parliament is to discuss the real reasons behind the spread of customary marriages, such as unemployment, which leads young people to lose hope in the future and refrain from starting a family within the traditional framework set by both society and the law.

He stressed that if members of parliament really want to fight the spread of customary marriages, it would be easy for them to submit a bill to parliament criminalizing such marriages instead of breaching the constitution and paving the way for the desecration of the bodies of young women.