After inviting Israeli ambassador for dinner, Egyptian MP finds himself without a job

Egyptian legislator Tawfiq Okasha, who has a habit of angering top Egyptian party leaders, angered them even more by meeting with the Israeli ambassador in Cairo and found himself dismissed from parliament. 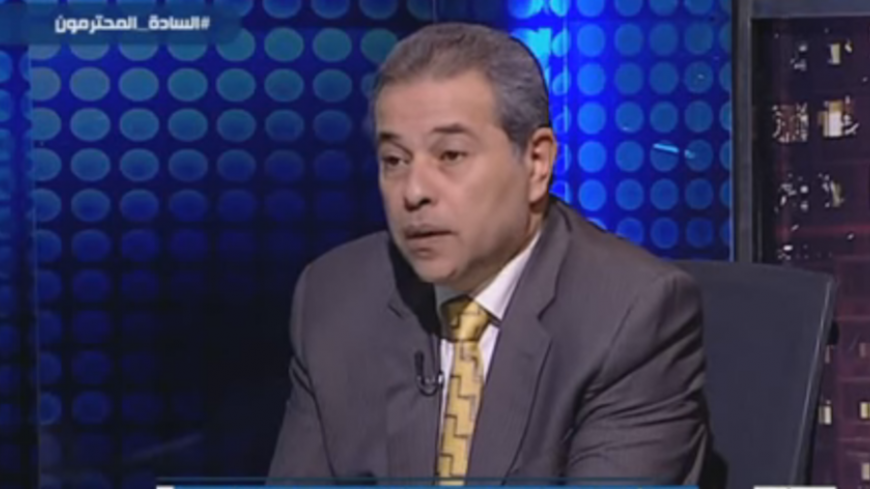 Some experts are questioning the reasons for, and constitutionality of, the Egyptian parliament's decision to unceremoniously sack a sharp-tongued and controversial member.

On March 2, the parliament voted to expel Tawfiq Okasha with the approval of 465 members out of the total 490 members who attended the session. Speaker Ali Abdel Aal announced the vacancy of Okasha’s seat and said elections will be held in the latter’s electoral district.

Some described the decision as surprising, especially as Okasha — who was not supported by any coalition or political party in the recent elections — had obtained 94,354 votes in the electoral districts of Talkha and Nabarouh in Dakahlia governorate.

On the face of it, Okasha’s membership was revoked for having invited the Israeli ambassador in Cairo, Haim Koren, to dinner at his home Feb. 24. Some parliament members believed the gathering was an act of normalization with Israel for which Okasha had to be sanctioned, ousted from parliament and even brought before courts.

Parliamentarian Samir Ghattas spoke to Al-Monitor about the reasons for revoking Okasha’s membership. He said, “This has nothing to do with his meeting with the Israeli ambassador. Several coalitions and parties wanted to get rid of Okasha for having insulted their icons and financiers. For example, members of parliament affiliated with the Nasserite movement, who have adopted the philosophy of the late President Gamal Abdel Nasser in terms of state administration, voted to revoke the membership of Okasha, who is a fierce detractor of Abdel Nasser and believes [Nasser] dragged the country into trouble and often criticized him and described him as an opportunist.”

He added, “The members of the Free Egyptians Party also voted on ousting Okasha, who had insulted the party's founder, Naguib Sawiris, and accused him of corruption. The 52 parliament members of Egypt's Nation's Future Party were also among the voters. This party is funded and sponsored by businessman Ahmed Abu Hashima, whom Okasha had insulted live on the air. Okasha was ousted because he has many opponents, and not because he met Israel's ambassador as some claimed.”

That statement was backed up by Mustafa al-Faqi, a political analyst and the information affairs secretary of former President Hosni Mubarak. Faqi said Okasha would have gotten high-level permission before inviting the ambassador to dinner. In a March 3 MBC channel talk show called "Yahdoth Fe Masr" ("Happening in Egypt"), Faqi said Okasha would not have dared meet with the Israeli ambassador “without the prior consent of the intelligence service and national security.”

Okasha is infamous for many recent enemy-making incidents.

On March 1, Okasha used his Fareen TV show to launch a raucous attack on businessman Ahmad Abu Hashima, the financier of Nation's Future, and described him as a pimp.

On March 2, a number of Nasserist activists and some residents of Bani Morr, Nasser's hometown, staged a sit-in at the home of the Nasser's cousin Haj Taha Hussein Khalil to protest Okasha's media attack on Nasser. In various statements, Okasha impugned the late president’s standing and belittled his achievements for Egypt and the Arab world.

Okasha also described businessman Naguib Sawiris — the founder of the Free Egyptians Party and winner of the largest number of parliament seats in the last election — as the “leader of the destruction of Egypt” and one of the corrupt figures who stood against the January 25 Revolution, since he was close to former President Hosni Mubarak and one of his sons.

Ghattas told Al-Monitor, “This feud [with Okasha] united the parliament members, who agreed on ousting him. But the parliament committed here a constitutional and legal error, since it violated Article 110 of the Egyptian Constitution on the revocation of parliamentary membership, especially as the former member did not violate any of the conditions or obligations set forth on this article.”

Article 110 states that membership may only be revoked if a member has lost the confidence and esteem of his peers, ceases to satisfy any membership condition upon which he was elected or has violated membership duties.

Ghattas said this incident was the beginning of the end for the parliament. “I opposed revoking Okasha’s membership so that the parliament does not turn into an arena for settling accounts, because no one is entitled to expel a member without referring him to investigation,” he said.

Ghattas explained that such a vote must be based on the recommendation of the investigating committee. A committee was set up to investigate Okasha for insulting the House speaker, but it decided Feb. 29 to merely ban Okasha from attending 10 sessions. “The parliament speaker, however, then called on members to vote on ousting Okasha, which is an unprecedented decision,” he said.

Nour Farahat, a constitutional expert, shares the same opinion. In a Facebook post March 3 (since deleted), he said parliament did not observe the law and the constitution and had violated Article 381 of the legislature’s internal regulations.

He added that, in cases of expelling a member, that article requires referring the matter to the Ethics Committee or the Committee on Legislative Affairs for investigation before a vote, and that did not happen.

Ghattas told Al-Monitor, “The relationship between Egypt and Israel is based on peace, and this parliament is a peace parliament. The objection raised by some members, who criticized the meeting with the Israeli ambassador, is a mere expression of opinion. The state is at full peace with Israel, and there is cooperation between the two countries in many fields. This is evidenced by the fact that Egypt has deployed troops in Zone C in Sinai in agreement with Israel, which confirms that the relationship between them is based on peace and mutual cooperation."

That sentiment was also stressed by the parliament speaker when the parliament expelled Okasha. Aal said, "Parliament respects all international treaties and conventions, including the peace treaty with Israel. The facts that were the subject of investigation have absolutely nothing to do with the ousted parliament member's meeting with the ambassador of Israel, but rather they are related to specific positions that harm Egyptian national security, go beyond the scope of membership in parliament and violate the obligations of a member.”