Ousted parliamentarian Tawfik Okasha still faces fierce criticism from his government for getting too close to Israel, in the ongoing Renaissance Dam saga — but could Egypt need Israel more than they are willing to admit? 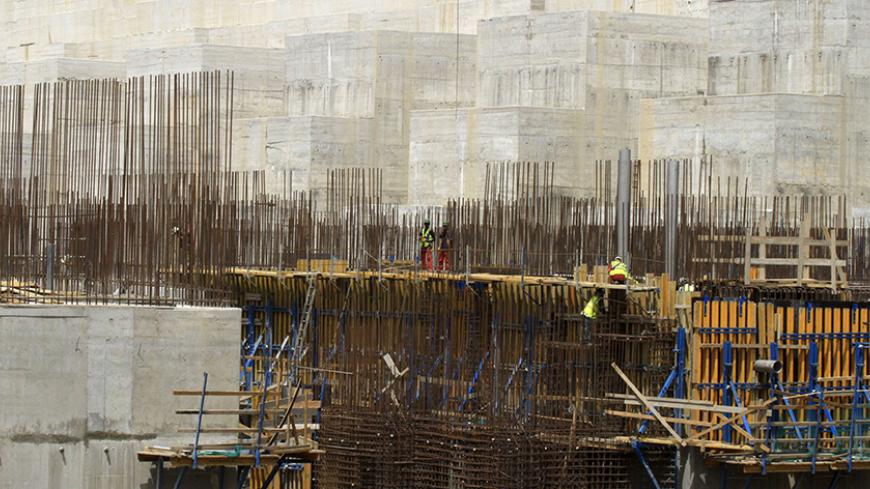 Construction workers are seen at a distance in a section of Ethiopia's Grand Renaissance Dam as it undergoes construction in Benishangul Gumuz Region, Guba Woreda, Ethiopia, March 31, 2015. - REUTERS/Tiksa Negeri

Parliament members voted overwhelmingly March 2 to revoke Okasha's membership for discussing the project with Israel. Egypt, Ethiopia and Sudan have been trying for more than 1½ years to navigate their numerous disagreements over the dam’s construction and how it will affect Egypt’s water supply.

Former Egyptian Minister of Water Resources and Irrigation Mohamed Nasreddin Allam told Al-Monitor that Egypt’s negotiator in the Renaissance Dam process is well aware of Israel’s role in supporting the construction of the Renaissance Dam — as well as its role in disrupting ongoing negotiations.

“Israel plays a pivotal role in the crisis, [but] given its water and political ambitions, it is not in Egypt’s best interests to have Tel Aviv as a mediator in the negotiations — as [Israel] remains, in the end, a strategic enemy of Egypt,” Allam said.

He stressed that any talk with Israel about the dam should be limited to reducing Israel’s intervention against Egypt’s interests and minimizing Tel Aviv’s role in the Nile Basin, rather than encouraging Israel to mediate talks between Egypt and Ethiopia, which is what Okasha did during dinner with the ambassador.

Okasha said in a Feb. 28 statement to Al-Monitor, “I have asked Israeli officials to intervene to solve the Renaissance Dam crisis, as Tel Aviv stands behind the construction of the dam, and it plays a key role in this issue.” Regarding an accusation of treason by his fellow parliament members, he said, “I serve the interests of my country.”

Parliament members considered Okasha’s move as normalization of relations with Israel against the will of the Egyptian people, and said it amounted to interference in the work of the executive authority, considering that the Egyptian government is solely entrusted with the management of the diplomatic negotiations with regard to the Renaissance Dam.

For his part, Hani Raslan, head of Nile Basin studies at Al-Ahram Center for Political and Strategic Studies, told Al-Monitor that, while it’s no secret that “Israel is a major player behind the scenes in the negotiations between Egypt, Ethiopia and Sudan,” he considers Okasha’s action naive.

“Delivering the Nile water to Israel is [part] of its dream to become an official member of the Nile Basin countries and to impose its control over the region,” he said.

Raslan said there is an entire floor at the Ethiopian Ministry of Water and Energy dedicated to Israeli water experts, as confirmed by Sudanese Ministry of Irrigation Undersecretary Haidar Yousuf, who has spoken about it on several occasions. Raslan also stressed that Israel’s presence is heavily felt in the tenor of the negotiations between Ethiopia and Egypt. He pegged Israel as being behind vague proposals designed to establish trust with Cairo while not benefiting Egypt. These plans, he said, only provide for general concepts, without any restrictions to keep Ethiopia from reducing Egypt's share of the Nile waters.

“Okasha’s proposal to supply Israel with 1 billion cubic meters of the Nile water further stresses the approach of pricing and selling the river's water,” said Raslan.

According to Raslan, selling the water is an old demand of the upstream countries, which believe Nile waters should be redistributed among the countries that overlook the river and that upstream countries have the right to sell their surplus of water to Egypt, based on the lowest cost to provide alternatives to the Nile water.

Okasha said his meeting with the Israeli ambassador also touched on the Palestinian issue and the possibility of Israel building 10 schools in Egypt as compensation for the Bahr Al-Baqar primary school bombing by Israeli air forces in 1970. The attack killed 30 children and injured 50 others.

Moreover, Okasha said he discussed the possibility of Israel dropping charges regarding international arbitration against Egypt in the gas supplies issue.