Egypt’s parliamentary 'circus' will not be going live

The Egyptian parliament apparently is so embarrassed by some members’ behavior that it has temporarily banned live media broadcasts of its sessions. 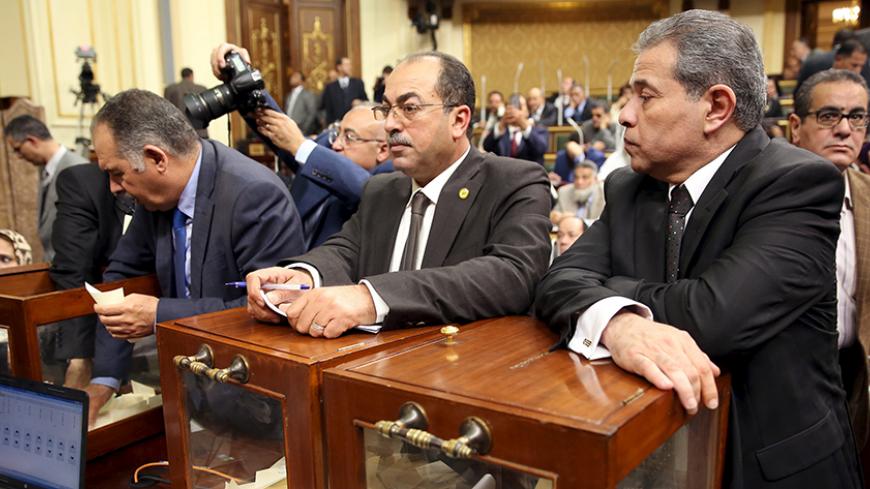 Legislators vote to choose the head of Egypt's parliament in Cairo, Jan. 10, 2016. - REUTERS/Stringer

During the first parliament session Jan. 10, some members of parliament exhibited inappropriate behaviors that were aired live on TV. One member was heard insulting parliamentary regulations, while member of parliament Murtada Mansour went off-script while reciting the constitutional oath. Mansour refused to acknowledge the 2011 revolution, which resulted in the resignation of President Hosni Mubarak, and accused his fellow MPs of being informers for Egyptian intelligence agencies.

MP Kamal Ahmed, expressing his objection to the way parliamentary sessions are conducted, abruptly resigned. Kamal was quoted in Shorouk newspaper as saying that the actions of some MPs had turned the parliament into a circus.

In a Jan. 12 news conference, Abdel-Al said, “We are not contesting the role of the media, and reporters will continue to cover the sessions.” He denounced the performance of some journalists and cameramen who took offensive shots of some MPs.

The Egyptian Constitution allows for completely closed sessions if specific procedures are followed. According to Article 120, “The sessions of the House of Representatives are held in public. The House may hold a closed session based on a request by the president of the republic, the speaker of the House, or at least 20 of its members. The House will decide by majority whether the debate in question takes place in a public or a closed session.”

Shawki al-Sayed, a constitutional law expert and former member of parliament’s now-defunct Shura Council, told Al-Monitor, “The decision not to broadcast the sessions live is void and contrary to the constitution.” He said, “The constitution expressly provides for public sessions, which must be broadcast to the public without omissions or editing, and every citizen has the right to see what is happening under the parliament’s dome as if he were there himself.”

Sayed added, “The press coverage is not sufficient to impartially and objectively relay what is happening in parliament. The public nature of parliament sessions provided for by the constitution means that sessions should be aired live. Any decision voted by the parliament in a closed session shall be deemed null and void.”

However, legal expert Issam al-Islambouli rejected the idea that decisions made during closed sessions are null.

“The public nature of the sessions set forth in the constitution is intended to allow citizens to follow up on the parliament sessions by attending the sessions and does not mean live broadcasting of sessions,” he told Al-Monitor.

The ban on live streaming comes at the most critical period for the parliament. Members must vote to continue the government and are expected to review more than 330 laws and decrees issued by President Abdel Fattah al-Sisi and former interim President Adly Mansour in the absence of a parliament for the past three years. Parliament has formed 19 committees to review the laws.

Though the broadcasting ban was approved by a majority, MP Samir Ghattas called it “a disservice to democracy in Egypt.”

“This decision will further complicate things. This is not the way to solve the problems that arise during sessions,” he said.

Ghattas added that he submitted a petition to parliament stating that “public opinion wants public hearings.”

“I warned that these practices would turn us into a nonviable and nondemocratic parliament,” he said.

Other MPs defended the decision. MP Mustafa Bakri was quoted by Shorouk newspaper as saying, “The decision was made to limit disturbances and to prevent some MPs from exploiting live coverage to put on a show.”

In an attempt to control the raucous floor, MPs also voted that extended applause during sessions will be limited to major national decisions or events.

Parliamentary affairs researcher Yosri al-Azbawi told Al-Monitor, “The chaos … that marred the first sessions of the parliament reflects the state of division and the weakness of the political parties [particularly the Support Egypt Coalition] and the electoral system that formed this parliament.”

He added, “Closed sessions cannot be a durable solution, and the rule is that the parliament sessions are open sessions.”

In another development, Abdel-Al ratified Presidential Decree No. 417/2015, extending by three months a state of emergency in some North Sinai areas, where the military is fighting Islamist militants. The speaker made the decision without putting it to a vote, which raised the ire of some MPs.

MP Fouad Badrawi slammed the decision, invoking Article 154 of the constitution, which says a state of emergency must be approved by a majority of MPs.

In turn, Abdel-Al replied, “The approval of the proclamation is not binding.”