Just how independent is Egypt's parliament?

The speaker of the Egyptian parliament has caused an uproar by suggesting that in "tough times" the legislative and executive branches should act as one. 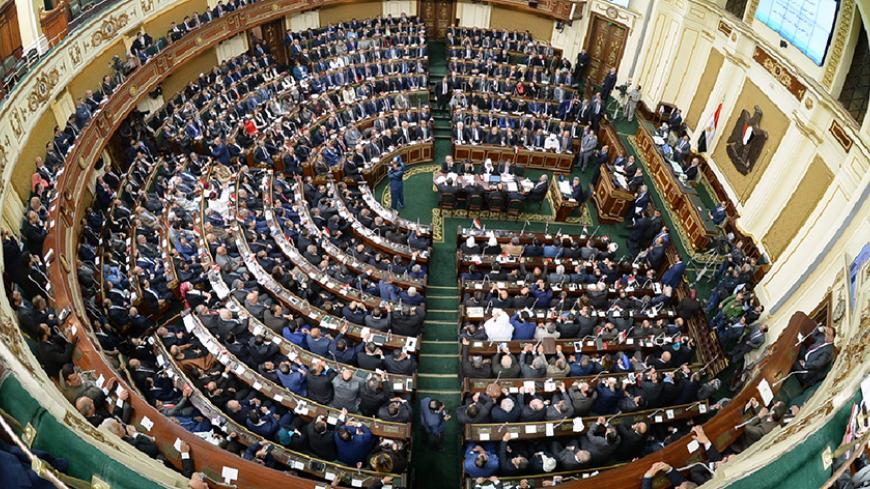 Egypt’s parliament hotly debated the government’s policy agenda before it was approved on April 20. During the sessions, several parliament members made scathing comments against statements released by the government and some ministers. They were answered in a warning by parliament Speaker Ali Abdel Aal, who described their words as offensive and abusive to the government and the Egyptian state.

During the debate on the government’s program, Abdel Aal said that he would use all of his strength to prevent any abuse against the government. He noted that Egypt is going through a tough period, and “In tough times there is no [individual] legislative or executive authorities. Rather, all of them should act as a single authority.”

According to Abdel Khabir Ata, a political science professor at Assiut University, Abdel Aal’s statement is a clear violation of the constitution and parliament’s internal regulations, stressing that the constitution guarantees the legislative branch's independence, granting it powers to monitor the government’s performance.

Article 5 of Egypt's current constitution bases the political system on political and partisan pluralism, a peaceful rotation of power, a separation and balance between powers, the responsibility that comes with power and respect for human rights and freedoms.

Moreover, Article 101 of the constitution stipulates that parliament holds the legislative power, with the right to pass the general policies of the state, the general plan for economic and social development and the state’s general budget, and shall also exercise control over the executive.

Ata told Al-Monitor that even times of crisis should not be an excuse for states to neglect the separation of powers, stressing that during such times, perhaps emergency ministries could be formed upon parliament's approval rather than combining the powers of all branches in the hand of one or prohibiting criticism of the executive.

He warned against what he called the domination of the executive power over the legislative and judiciary in the absence of parliamentary oversight.

“The executive branch is seeking to control the powers of the parliament and the judiciary. This can be considered political corruption, amounts to collapse of the state and neglects the people’s right to a legislature and supervision of the government’s performance,” said Ata.

He also stressed that failing to apply and abide by the constitution will not only undermine Egypt's stability, but lead to the complete collapse of its institutions, including the executive branch.

Ramadan Battikh, a professor of constitutional law at Ain Shams University, does not see Abdel Aal’s statements as a violation of the constitution. He explained that the parliament speaker was talking about the need for the state institutions to work together and be integrated to work toward the common good. He stressed in his statements to Al-Monitor that the survival of the state is more important than strictly applying the constitution and the law. Should the state be in real danger, all authorities should come under one banner, a custom he believes is in line with others adopted by most of the world’s constitutions.

“Since its first session in January, the current parliament has been preoccupied with passing laws for the transitional phase and internal regulations, as well as forming higher presidential committees and bodies. Therefore, the parliament did not fulfill its monitoring role over the government's performance,” Battikh said.

Yasser al-Hudaybi, another constitutional law professor at Ain Shams University, told Al-Monitor, “The current Egyptian constitution has granted the parliament new powers that did not exist before, whereby the parliament has become stronger than the president and the prime minister. The people and their representatives at parliament are considered to be above all the state’s authorities.”

On Sept. 13, during the inauguration of Youth Week at Suez Canal University, President Abdel Fattah al-Sisi said, “The current Egyptian constitution has been drafted in good faith, but states are not built on good faith,” a statement observers believed was an implicit declaration of his intention to amend the constitution.

Hudaybi stressed the potential for conflict between the three authorities, noting that Egypt's constitution provided for the separation of powers in order to promote integration among state institutions and ensure the state functions smoothly.

Although he acknowledged that the Egyptian state is suffering from major internal and external pressure, Hudaybi warned against losing sight of the meaning of the parliament speaker’s attempt to dissuade parliament members from criticizing the government. He stressed that the speaker has no right to deny parliament one of its inherent powers in a clear violation of the constitution.

“The authorities should make better use of what is guaranteed by the constitution to ensure the stability of the political system on which the state is based and managed,” Hudaybi said. He warned against undermining the role of the parliament in monitoring the government and against the legislative control of parliamentary powers, as mixing the powers of the three branches would adversely affect all the state’s institutions.

Parliamentarian Haitham al-Hariri believes that Abdel Aal’s statements could be interpreted in two ways. First, they could be interpreted as meaning that the legislative, judiciary and executive branches are all responsible for making the necessary decisions and taking measures to extract Egypt from its crises. Another interpretation is that he was dissuading parliament members from criticizing the government while the state is plagued with crises.

“Even in a time of crisis, the parliament’s role is to set forth the government’s policies and monitor its performance,” Hariri told Al-Monitor. “The parliament’s role and right to monitor the government’s performance does not conflict with the state’s endeavors and efforts to get out of the crises,” he added, stressing that the state institutions' work should be integrated to better run Egypt’s affairs.

He added, “The constitution requires that the parliament take specific actions — such as briefing requests and questioning — against the government officials, should their performance and general policies not be approved by parliament.”