How does Sisi really feel about Egypt's constitution?

Critics of President Abdel Fattah al-Sisi say he is bending Egypt's constitution to his will and that he alters his statements about the constitution depending on his audience. 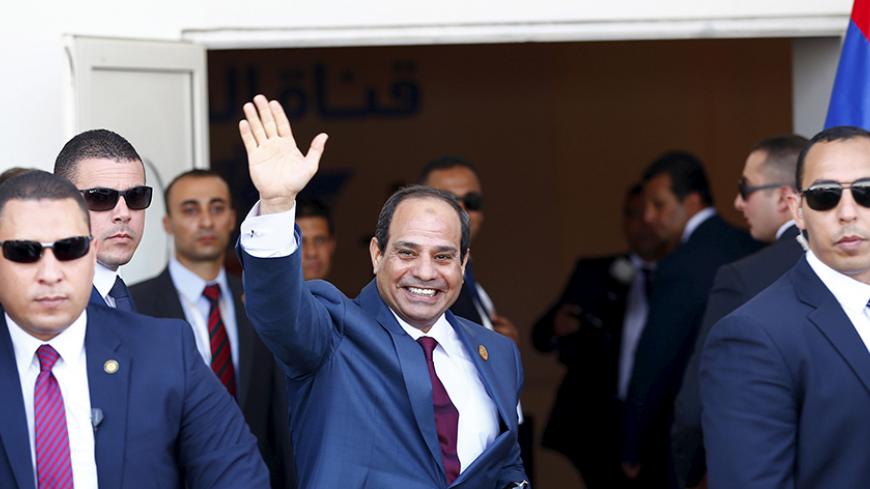 During a meeting with a delegation from the US Congress on June 26, President Abdel Fattah al-Sisi said the Egyptian Constitution includes unprecedented provisions regarding the rule of law and democratic practice. This is the same constitution that, during a meeting with Egyptian university students in September, Sisi described as “a constitution written with good intentions," but then added, "States are not built with good intentions.”

During a November BBC interview, Sisi said his statements about good intentions had been misunderstood, and he pledged not to seek amendments to the constitution or exercise more power than it affords him.

Mustafa Kamel Sayed, a professor of political science at Cairo University, told Al-Monitor the president’s statements about the constitution differ depending on whether he is addressing the West or Egypt. He said this is common in Arab politics in general and added that, in his view, the president’s statements to the Egyptians on the constitution are more indicative of what is going on in his mind.

However, Sayed claims parliament Speaker Ali Abdel Aal is not fully committed to the articles of the constitution. As an example, he noted parliament's approval of the fiscal 2016-17 budget despite the budget’s apparent violation of the constitution regarding health, education and housing spending.

Fouad Abdul Nabi, a professor of constitutional law at the University of Menoufiya, talked to Al-Monitor about what he described as Sisi’s ongoing violation of the constitution. As an example, Abdul Nabi noted that the president agreed with Cyprus and Greece on the delimitation of the maritime border in the eastern Mediterranean region, and signed the Renaissance Dam document of principles. Sisi prompted the prime minister to sign the maritime border demarcation with Saudi Arabia, under which Egypt ceded to the kingdom the islands of Tiran and Sanafir — without referring to the legislative authority in accordance with Article 151 of the constitution. This article allows the legislature to represent the state in its foreign relations and conclude and ratify treaties upon the approval of the House of Representatives.

Abdul Nabi also accused Sisi of circumventing Article 216 of the constitution by dismissing the former head of the Central Auditing Authority (CAA) Hisham Geneina in a controversial move. The article prohibits the dismissal of heads of regulatory bodies except in specific cases. Abdul Bani stressed that Sisi issued Law No. 89 of 2015 before the parliament was formed to grant himself the authority to dismiss the heads and members of regulatory bodies.

According to Abdul Nabi, the former CAA head had not violated the constitution, as Article 219 stipulates that the CAA is responsible for monitoring the funds of the state, implementing the state budget and independent budgets, and auditing final accounts.

Abdul Nabi said Sisi's decision to impose a state of emergency in the north of Sinai Peninsula — issued April 28 and submitted to parliament May 8 — is a clear violation of Article 154 of the constitution. That article says the president, after consulting with the Cabinet, must submit a state of emergency declaration within seven days to the House of Representatives, which can then act on the proposal as it deems fit.

“The Egyptian administration is only using the constitution to boast in front of the West that Egypt has a constitution that elevates freedom, democracy and the values ​​of citizenship,” Abdul Nabi said.

The current constitution can theoretically be described as the most fascinating in the modern era, he said, but the Egyptian administration, and especially the executive power, are systematically breaching the constitution, especially the articles that preserve the rights of citizens and safeguard their freedoms.

Mohamed Abla, who was on the 50-member committee tasked with drafting the constitution, told Al-Monitor he is disappointed by the House of Representatives’ failure to act on what he described as the executive branch's ongoing violations of the constitution.

Abla, like Sayed, believes Sisi shifts his statements about the constitution depending on his audience, especially when he is seeking to improve his image with foreign countries. But the truth, Abla said, is that some provisions worry the president, especially those that relate to the period of his term and the powers granted by the constitution to the parliament and government.

Abla also agreed with Sayed's assessment that Abdel Aal violated the constitution to pass the budget of 2016-17, which did not meet constitutional mandates on how much must be spent on education and health. He criticized the parliament speaker's assertions that the spending proportions for these sectors were set by the 50-member committee and that the constitution was written in a transitional stage.

Abla added that the consensus among the authors of the constitution is positive — not negative as the parliament speaker thinks — and stressed that members of the committee reviewed the history of Egypt's constitution to draft the current version, knowing that this constitution garnered the confidence of more than 98% of Egyptians.

“We lack serious partisan work and freedom of the press. So who is monitoring the implementation and respect of the constitution?” Abla asked. He also said that at the end of Sisi’s current presidential term, Sisi will seek to amend some articles of the constitution, as he believes he can pass any amendment he wants in the absence of any opposition or partisan work.