An Egyptian lawmaker is drafting contentious legislation that would allow civil servants to be fired from their jobs for no other reason than their affiliation with the Muslim Brotherhood. 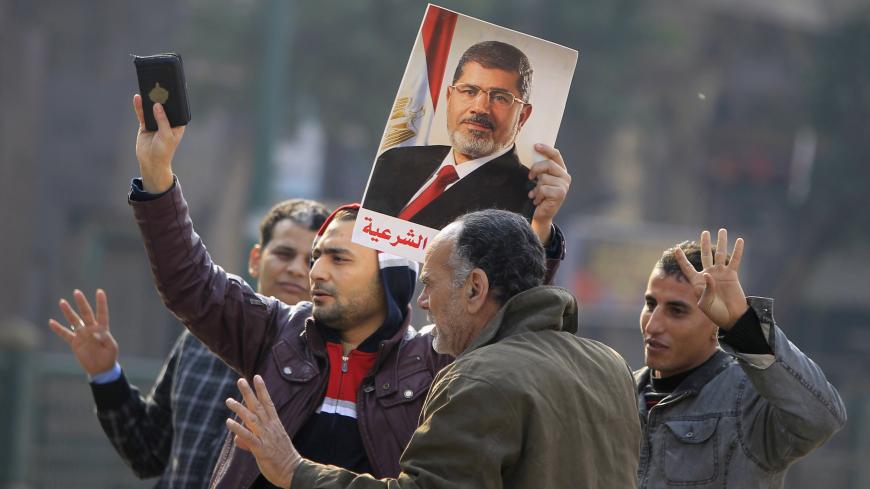 CAIRO — Mohamed Abu Hamed, the deputy chairman of the Egyptian parliament's Social Solidarity Committee, is stirring controversy in human rights circles, having revealed that he is preparing a draft law aimed at dismissing members of the Muslim Brotherhood from their public posts. Many people fear the draft law, which they say violates the Egyptian Constitution, might eventually be expanded to be used against regime opponents.

Egypt’s Constitution reads as follows: “Public posts are a right for citizens on the basis of merit, with no favoritism or mediation. Public posts are an assignment in service of the people. The state ensures the rights and protection of civil servants, and that they shall perform their duties in service of the interests of the people. They may not be dismissed outside of disciplinary action except in those situations set out by law.”

In a late-July phone interview aired on Al-Mihwar TV, Abu Hamed announced that he has nearly completed draft legislation “to dismiss the Muslim Brotherhood members from their [public] posts,” indicating that the draft will be submitted to parliament in the third session, which begins in October.

Abu Hamed told Al-Monitor that he finished preparing 25 articles in the draft law, pointing out that the draft is similar to a 1972 law that included articles stipulating the dismissal of any public official when committing any act threatening the security and safety of the homeland. “This draft has been prepared to cope with the challenges facing the country and in line with specific legal and constitutional procedures,” he said.

Dismissing a civil servant under the proposal would require several stages. The person would first have to be classified as affiliated with the Muslim Brotherhood through legal procedures before the courts. If a court order is issued, then the appropriate administrative body would follow the required steps to dismiss the targeted person.

Abu Hamed described various current and past attempts at reconciliation between Sisi's regime and the Brotherhood as crimes and an affront to the Egyptian state and people. He wants to adopt the approach of former Egyptian Prime Minister Mahmoud Fahmy Nokrashy Pasha, who ordered the group’s dissolution in 1948.

In December 2013, under the rule of interim President Adly Mansour, the government labeled the Muslim Brotherhood a terrorist organization. This step provoked a legal debate at the time, since this decision was issued by the government and not the interim president, who is the competent legislative authority during the transitional period. In February 2014, the Cairo Court of Urgent Matters blacklisted and banned the Muslim Brotherhood, and in April of that year, then-Prime Minister Ibrahim Mehleb issued the relevant implementing decision.

Abu Hamed’s draft law is even criticized by opponents of the Muslim Brotherhood. Mohamed Abdel Aziz, the founder of the Tamarod movement against the Brotherhood and a member of the National Council for Human Rights, told Al-Monitor that the proposal is unnecessary and that the Anti-Terrorism Law No. 94 of 2015 includes enough articles to resolve any crisis related to confronting terrorist organizations and their members.

He said exaggerated punitive measures against those who have not committed acts of sabotage lead to a state of polarization that could fragment society. He noted that the 2015 anti-terrorism law provides for sanctions against perpetrators of terrorist crimes and acts of violence.

Abdel Aziz doesn't believe the draft law will get far.

“So far the draft law remains mere press statements and is unlikely to see the light, since it violates the constitution,” he said.

He recalled a 2015 speech in which Sisi called on parliament to face challenges while promulgating new laws, since the 2014 constitution was “written with good intentions that conferred wide-ranging powers on parliament […] but not enough to build states.”

Adly believes the current parliament is facing such challenges. He told Al-Monitor that the parliament is breaching the Egyptian Constitution "by passing unconstitutional but politically desired laws.”

He noted, “This parliament passed a number of unconstitutional laws. Even the worst parliaments in the history of Egypt did not pass such laws. The right to work is a constitutional right that may not be denied. A [civil] employee or worker may only be dismissed when committing an occupational crime, a crime related to the public money or a criminal offense. Dismissal is often a complementary sanction for such crimes. Otherwise, it is not permissible to dismiss any civil servant.”

Adly added, “Such a draft law, [if passed], may create ticking terrorist bombs in light of the current security crackdown on Muslim Brotherhood members, supporters or even suspected sympathizers. Cutting these civil servants’ sources of livelihoods will push them to commit acts of violence. Meanwhile, Egypt needs to bring these people closer to it and persuade them to abandon extremism and violent ideologies.”

Many US experts on the Brotherhood agree. Though US President Donald Trump is mulling whether to declare the group a terrorist organization, analysts cite the potential dangers of such a move.

As for the possibility of expanding this draft law to use it against the regime’s various opponents of different ideological tendencies, Adly said experience has shown that measures taken against the Brotherhood have been expanded to apply to the regime’s opponents.

“I was arrested against the backdrop of the Tiran and Sanafir crisis in May of 2016 and charged with attempting to overthrow the regime, joining a banned organization, seeking to alter the provisions of the constitution and the law, preventing state institutions and public authorities from carrying out their work, and harming national unity and social peace. If this draft law is passed, it is possible to expand its use against any opposition activist," he added.

Until the start of the third session and the discussion of Abu Hamed’s draft law, the proposal to dismiss Brotherhood-affiliated civil servants from their positions will remain a sword hanging over the heads of the group’s members and supporters, and also the heads of all opponents of the current Egyptian regime. The draft will also keep stirring controversy within human rights circles over its constitutionality.