The government has approved a proposal to amend Egypt's nationality law, but some fear the amendments might be targeting the regime's opponents. 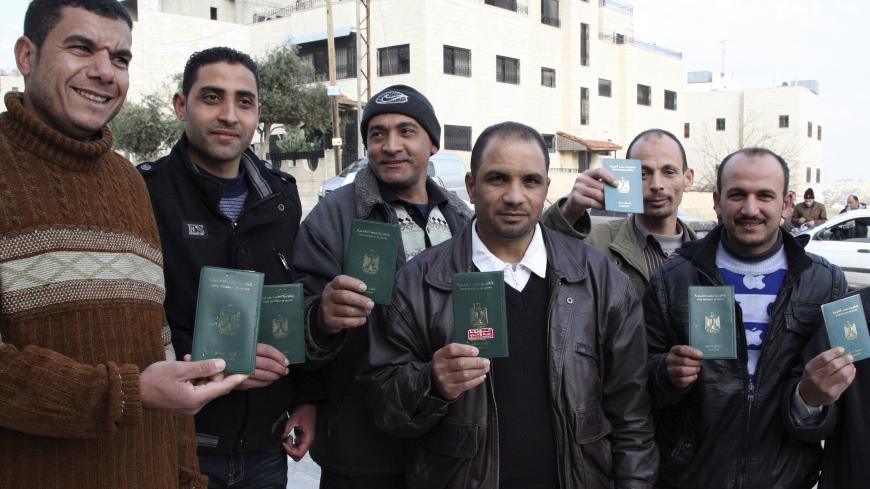 A proposal that may reach the Egyptian parliament could give the government greater powers to revoke Egyptian citizenship. Here, Egyptian men pose with their passports before voting in a referendum on the country's new constitution at the Egyptian Embassy in Amman, Jordan, Jan. 9, 2014. - REUTERS/Majed Jaber

CAIRO — The Egyptian government’s approval Sept. 20 of a proposal to amend the country's nationality law raised controversy among politicians, legal experts and rights activists amid fears that the amendments might be targeting opponents of current regime policies.

According to a Sept. 20 statement by the Council of Ministers, the government’s proposed amendments would broaden the powers of the prime minister when it comes to taking nationality away from citizens. The proposed changes would add a provision that could revoke the nationality of Egyptians convicted of a crime harming state security, whether in Egypt or abroad, even if the person's parents were both Egyptian. The proposal also has a provision that would revoke Egyptian nationality acquired by a foreigner who joins any group or organization, inside or outside the country, aimed at harming the public order of the state.

Human rights activists and observers fear that if the amendments become law, the government would misuse them to take Egyptian nationality away from persons opposed to the regime under the pretext of protecting the country's security. The proposed amendments are expected to be submitted to the Egyptian Council of State for legal review before being referred to parliament, whose majority supports President Abdel Fattah al-Sisi and his government.

“Some from among the new arrivals to Egypt from countries with an unstable security situation took advantage of legal loopholes to acquire Egyptian nationality, thus the need to amend this law,” Anwar said.

He said revoking nationality falls within the scope of the permissive and discretionary power of the Council of Ministers only, which must issue a reasoned decision in accordance with “the supreme interests of the country and the requirements of national security.”

Asked about former President Mohammed Morsi and others affiliated with the Muslim Brotherhood, classified by the government as a terrorist group, Anwar said that the amendments provide for withdrawing nationality after a final judicial ruling. He said that stripping Morsi of his nationality is a decision subject to the Council of Ministers.

The administrative courts at the Egyptian Council of State have their hands full with lawsuits that call for Egyptian citizenship to be withdrawn from political figures opposed to the regime and also from Muslim Brotherhood leaders, whether in Egypt or abroad, against whom criminal judgments were issued or who are accused of communicating with foreign countries or working abroad with anti-Egypt entities.

In June 2016, the Administrative Court refused to strip Morsi of his nationality for lack of evidence proving he committed any act that undermined national security or harmed the country's supreme interests. But when Morsi was convicted of communicating with Qatar on Sept. 17, a new lawsuit was quickly filed that seeks to have his Egyptian citizenship withdrawn.

Nasser Amin, a member of the Egyptian National Council for Human Rights, told Al-Monitor, “The government proposal explicitly violates Article 6 of the Egyptian Constitution and is contrary to the international conventions signed by Egypt, including the International Covenant on Civil and Political Rights.” He said that nationality is a basic human right and that nationality may not be revoked even by law. “No state, government or regime has the right to do so,” he said.

Article 6 of the Egyptian Constitution says, "Nationality is a right to anyone born to an Egyptian father or an Egyptian mother, and legal recognition through official papers proving his/her personal data, is a right guaranteed and regulated by law. Requirements for acquiring nationality shall be specified by law.”

Amin said of the amendment proposal, “If passed, it will be a major legislative disaster that will forcibly turn citizens into aliens. The amended law might be used by the government or the regime to persecute a given civilian group or a group of citizens for political reasons.”

Amin said he did not think the changes will pass, saying the government is expected to refer the proposal "to the State Council's Fatwa and Legislation Department — which is responsible for reviewing draft laws submitted by the parliament or the government and examining their conformity with the provisions of the constitution and international covenants" before forwarding the amendments to parliament in preparation for discussion and approval.

Salah Fawzi, a constitutional law professor at Mansoura University who participated in the drafting of Egypt’s 2014 constitution, told Al-Monitor that the amendments do not violate the constitution or the Universal Declaration on Human Rights. “The constitution did not prohibit the withdrawal of nationality from Egyptian nationals and left it to the government to regulate the process of granting or withdrawing nationality,” he said.

Fawzi said the amendments provide for guarantees by requiring a justification for the decision to revoke someone's nationality and by allowing citizens stripped of their nationality to have recourse to the court to reverse this decision. “The law sets forth a general framework and does not target specific persons,” he noted.

On Dec. 14, 2016, parliamentarian Mustafa Bakri, who supports Sisi’s regime, along with more than 60 members of parliament, had submitted a less stringent version of the government's proposed amendments to revoke the Egyptian nationality of "terrorists."

Bakri’s proposal specified that anyone convicted by a final and conclusive judgment of committing a “terrorist” crime would be stripped of Egyptian nationality. His proposal was rejected by the government at the time and postponed.

In an article in Al-Watan newspaper, Bakri criticized the current government’s proposal, saying, “It might be exploited to punish anyone with a dissenting opinion.”

Author and journalist Abdullah al-Senawi described the government’s proposal as a serious legislative development that deprives the state of its jurisdiction over its citizens and its right to prosecute the perpetrators of crimes abroad according to international laws. He told Al-Monitor, “The proposal also would revoke the nationality of the adult children of Egyptian women married to a foreigner, but not that of her minor children.”

Senawi said the amendment proposal is a setback, considering that Egyptian women married to a foreigner have obtained the right for their children to be granted Egyptian nationality. “This is a serious violation of the rule of equality that threatens the stability of the family,” he said.

Many believe that the government will not back down from the proposal and that parliament will likely approve the amendments since most lawmakers support Sisi’s regime.