The Egyptian government has revoked the citizenship of leading Egyptian activist Ghada Naguib, who has been living in self-exile in Turkey since 2016, raising concerns among human rights activists about the issuance of similar decisions against dozens of activists abroad. 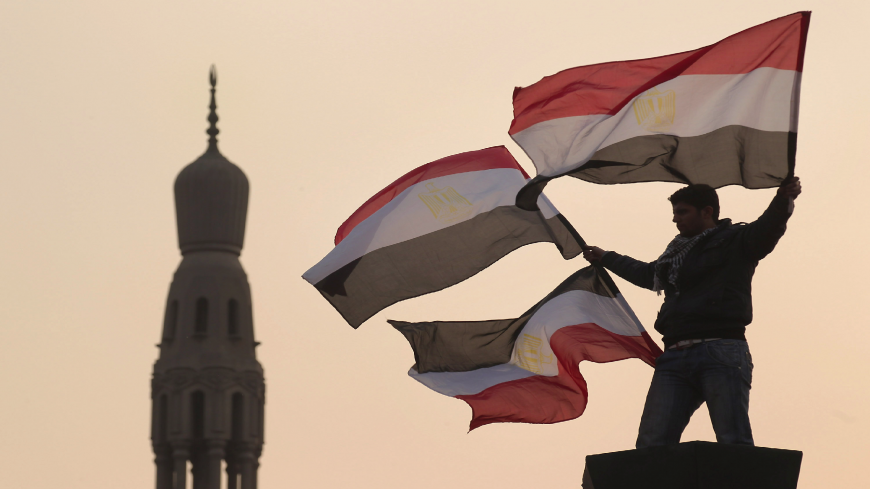 A youth waves Egyptian flags from a lamp post in Tahrir Square on Feb. 1, 2011, in Cairo, Egypt. - Peter Macdiarmid/Getty Images

A correspondent in Egypt
January 4, 2021

CAIRO — Egypt’s Prime Minister Mustafa Madbouly recently issued a decision to revoke the nationality of Ghada Naguib, an opposition political activist and the wife of well-known artist Hisham Abdallah, both of whom have lived in Turkey for several years.

The decision, published in the official gazette Dec. 24, reads that Naguib’s Egyptian nationality was withdrawn based on the grounds that she was convicted of a felony to harm the Egyptian state’s security while residing abroad. The decision also stated that Naguib is a Syrian national.

Naguib left the country in January 2016 along with her husband, who works as a TV host at the Egyptian opposition al-Sharq channel in Turkey, after Abdallah was accused of a number of political issues. They have been residing in Istanbul since then.

Speaking to Al-Monitor virtually, Naguib rejected the decision to revoke her nationality, saying it is a mere political decision that will not make her a non-Egyptian citizen, adding that she will continue to oppose the regime of Abdel Fattah al-Sisi.

Commenting on the claims of being a Syrian national, Naguib said, “It is not true that I hold Syrian citizenship. It is true, however, that I have Syrian origins. But the only citizenship I hold is the Egyptian one.” Naguib added that the decision to strip her of her nationality, which rendered her stateless, took her by surprise, saying it is designed to terrify her and any other Egyptian opposition activist.

Meanwhile, other Egyptian opposition activists fear their nationality will be revoked in light of a lawsuit brought before the State Council, which is Egypt’s highest judicial authority that rules on administrative matters.

On June 20, the Administrative Judicial Court of the State Council decided to delay the lawsuit filed by Samir Sabry, a lawyer known for his support of Sisi's regime. The lawsuit calls for the withdrawal of the nationality of 11 Muslim Brotherhood officials and journalists residing in Turkey over terrorism charges. A date for a court session to decide on whether to move forward with the lawsuit will be decided after the court's expert committee gives its opinion on the case. If accepted, the lawsuit would entail the withdrawal of the nationality of all those involved in the case.

In September 2017, Egypt’s government approved new amendments to the Egyptian nationality law, expanding the government's ability to issue decisions stripping citizenship. One of the amended articles allows the government to revoke the citizenship of those convicted of belonging to a group seeking to harm the public order, or undermine the states’ social, economic or political regime by force, or any other illegal means. And that also includes any association, party, organization, gang, or any other entity regardless of its legal status, form or nature, and regardless of whether or not it is based in Egypt, with the same goal.

A human rights lawyer residing in Egypt told Al-Monitor that amendments to the Egyptian nationality law “point to the Egyptian regime’s desire to terrify the opposition whether inside or outside Egypt, and to threaten them of stripping them from citizenship if they oppose the regime.”

The source added, “These amendments are authoritarian. They could result in tens of thousands of Egyptians in prisons or at risk of losing their citizenship. It only requires a court ruling convicting a person of being affiliated with any political group. Thus, it would be easy to issue a decision to withdraw citizenship from that person without even having to wait for the appeal against the court ruling, although the appeal could acquit that person.”

The source believes the regime’s goal in revoking Naguib’s citizenship is to test the waters before similar decisions are issued against other opposition activists living abroad. If no reactions are observed, it will be possible to see similar decisions against tens of thousands without any deterrent, he added.