Amendments to Egypt’s citizenship law could be approved amid fears they would be used to repress the regime’s opposition. 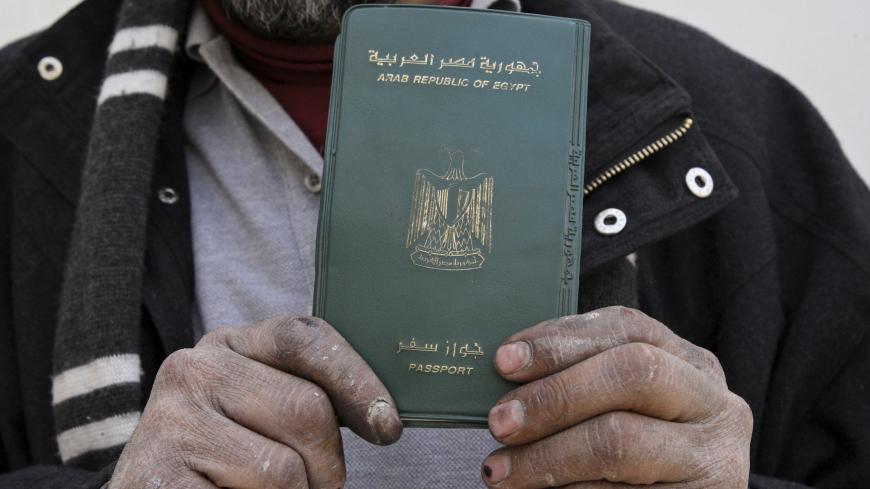 An Egyptian man shows his passport after voting in a referendum on his country's new constitution at the Egyptian Embassy in Amman, Jan. 9, 2014. - REUTERS/Majed Jaber

CAIRO — Parliament is set to consider amendments to Egypt's citizenship law. The country's administrative courts approved the amendments Dec. 18, and parliament is expected to vote on them.

Opponents say the amendments, which involve the revocation of citizenship, can be interpreted so broadly as to include peaceful protests, free speech and activism, and they could be used to harass and restrict journalists.

Egyptian courts are buzzing with cases against the regime's political opponents — including former Vice President Mohamed ElBaradei — alleging espionage and endangering national security. On Dec. 10, Cairo Criminal Court added the names of 161 Muslim Brotherhood members to its list of terrorists. The new amendments could deprive them all of Egyptian citizenship.

Deposed and imprisoned former President Mohammed Morsi also could be affected. An administrative court is awaiting a legal opinion from the State Commissioners’ Committee on a proposal to withdraw Morsi’s citizenship. Morsi has been convicted of espionage and leaking government documents relating to national security and the armed forces to Qatar. Under the new amendments, these charges would be sufficient to strip Morsi of his citizenship.

Also, on Jan. 4, parliament member Atef Abdel-Jawad called for revoking the citizenship of Saad Eddin Ibrahim, the director of the Ibn Khaldun Center for Development Studies, for having visited Israel to lecture at Tel Aviv University. Jawad described the visit as direct normalization with the "Zionist entity" and a great betrayal.

According to the Project on Middle East Democracy, "Revocation of citizenship means the annulment of certain rights ensured by the Egyptian constitution, including access to employment, health care, education, subsidized food and other governmental services. It also means severe or complete restrictions on travel, the loss of status in society and the severing of practical and emotional ties with one’s homeland."

Some constitutional experts believe the new amendments are contrary to the constitution. One such expert is Fathi Sorour, a criminal law professor at Cairo University and former speaker of the People's Assembly, which used to be the lower house of Egypt's now-unicameral parliament.

“Withdrawing nationality in accordance with the amendments … is tantamount to a death sentence against the defendants. The affected person will become stateless and thus nonexistent,” Sorour said at a Dec. 20 seminar called “The Legal Confrontation of Terrorism” before the British University of Egypt's law faculty.

If the amendments are approved, the Council of Ministers will be able to strip citizenship from anyone convicted in Egypt of a crime against state security, whether the crime took place in Egypt or abroad, regardless of whether the person was born in Egypt or naturalized. This includes anyone who the court finds is even affiliated with any group deemed to threaten national security or seeking to undermine public order.

Also, under the amendments, the government could strip citizenship from anyone who was naturalized and stops residing in Egypt for two consecutive years without an excuse accepted by the interior minister. The proposals also would increase the period during which Egyptian citizenship may be withdrawn from a foreigner who acquired it by naturalization or marriage from five years to 10.

Some observers see the amendments as designed to harass opponents of the current regime, whether in Egypt or abroad, mainly those believed to be part of the Muslim Brotherhood. Others feel the amendments are legitimate and come within the framework of warding off any attempt to endanger the country’s security and stability.

Lawyer and human rights activist Tariq al-Awadi told Al-Monitor, “The amendments … aim to tighten the grip on all opposition [groups] in Egypt. This is not limited to the Muslim Brotherhood, but includes all groups opposed to the current regime's policies.”

He added, “Dozens of lawsuits are filed against the symbols of the Islamic movements on charges of terrorism, stirring chaos and espionage. This includes the charge of espionage leveled against former President Mohammed Morsi. This means that Morsi and all the defendants in these lawsuits — who are detained in Egyptian prisons — will be denied Egyptian nationality once judicial rulings against them are issued."

Awadi said, “Unfortunately, the new amendments contain general and loose terms that have no explanation in Egyptian law and are subject to interpretation at the state’s sole discretion. For example, there is no exact definition for ‘harming the state public order՚ or ‘undermining the social order.՚” Those phrases could be interpreted to include unlicensed protests, he said.

Abla al-Hawari, a member of the parliamentary Constitutional and Legislative Affairs Committee, told Al-Monitor the amendments also neglect to outline "how the state will deal with Egyptians" once their citizenship is revoked.

“Citizenship is a legal relationship between the citizen and the state. This relationship entails political, economic and social rights and duties; revoking citizenship would completely end this relationship. Citizens stripped of their nationality would lose the right to vote or to run or hold positions in the state. These people will be denied government health care, education and all government services.”

Hawari emphasized that the amendments don't address whether revocations might also apply to a person's dependents. "If the children were studying at government schools and were deprived of their citizenship, they would be expelled from their schools.”

Constitutional jurist Noor Farahat said ​in a Sept. 21 post on Facebook, "Any reasonable person with [even] a limited understanding of the constitution would know that [these] amendments are contrary to the constitution," which says citizenship is a right for everyone born to Egyptian parents.