Kuwaiti authorities have revoked the citizenship of a number of key opposition figures in recent months, raising concerns the move is part of a renewed effort to crackdown on dissent. 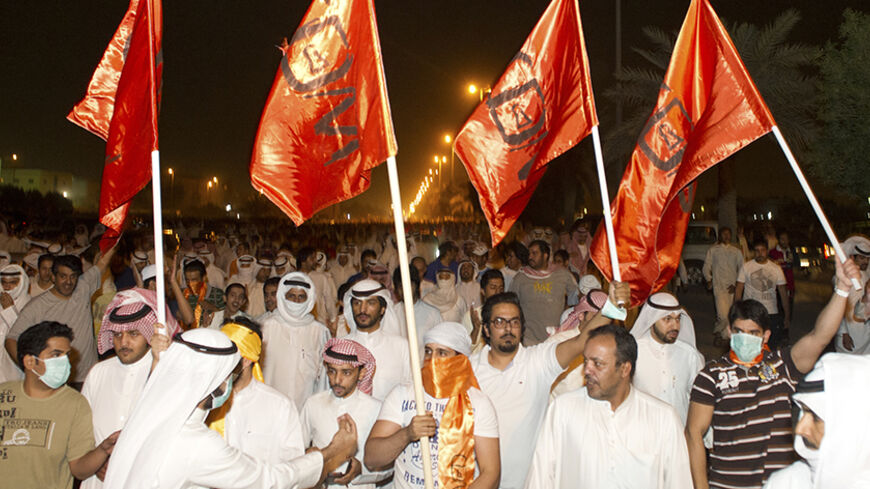 Supporters of Kuwaiti former member of parliament and opposition politician Musallam al-Barrak wave flags in Andulos after a ruling sentenced Barrak to jail for insulting the emir, April 15, 2013. - REUTERS/Stephanie McGehee

In the past four months, Kuwaiti authorities have revoked the citizenship of 32 people based on various allegations. Despite attempts to justify these actions in legal terms, the move is widely seen as a campaign targeting political dissent. Kuwaiti law grants authorities the right to strip a person of citizenship for threatening national security, undermining national unity, being a dual citizen or acquiring a criminal record within 15 years of naturalization.

In June, officials announced the names of five people whose citizenship was revoked based on Article 5 of the citizenship law: “If evidence is available from competent authorities showing that he has promoted principles that will undermine the social or economic system of the country or belongs to a foreign political party. In this case, the court may also revoke the citizenship of those who obtained it from him by dependency.” The list included Abdullah al-Bargash, a former member of parliament, and three of his siblings. Bargash is an Islamist politician active in the opposition.

The list also included Ahmed Jaber al-Shammari, the owner of a newspaper and TV channel closely associated with the opposition. Both media outlets have been suspended on several occasions. Some staff members were summoned for interrogation after an opposition statement was read live during the news following the dissolution of the parliament in June 2012. After revoking Shammari's citizenship, authorities also rescinded his media permits, destroying the jobs of 700-800 people employed by him.

Despite the statements and protests stirred by their decision, Kuwaiti authorities did not stop there. The Cabinet claimed the revocations were to protect “national unity, security and sovereignty.” In August, a list containing an additional 10 names was released and included Nabil al-Awadhi, a cleric widely known in the region for his TV talk shows on al-Watan. Awadhi had been stateless, a Bedoon, before being naturalized in 2003. The citizenship law allows authorities to naturalize public figures like Awadhi under the designation of offering “valuable contributions.” These 10 people had been stripped of their citizenship, authorities said, after a review of their records revealed false information in their claims or documents. Officials did not provide details to support the allegations.

The third and most recent list of citizenship revocations includes the opposition activist and journalist Sa'ad al-Ajmi, who formerly headed Al-Arabiya TV in Kuwait. The lists keep getting longer, this one containing 16 names. Given the criminalization of dual citizenship in Kuwait, those who have their Kuwait citizenship revoked are forced to join the community of 120,000 persons born stateless.

Shammari approached the courts to challenge the Cabinet's decree against him, and on Sept. 25 Kuwait's administrative court found the revocation “unconstitutional.” The court also said, however, that it has no power to reverse it.

The use of citizenship as a tool of punishment and intimidation is not new to the regimes in the Gulf. In Bahrain, the government has been revoking the citizenship of opposition figures and activists since the 2011 uprising there. Verdicts against protesters and activists receiving five to 15 years in jail have included revoking citizenship. This affected eight people in August and nine more people in September.

The United Arab Emirates retaliated similarly against a group of Islamists in 2011. In 2001, Kuwait had evoked the citizenship of Suliman Abu al-Ghaith, an al-Qaeda leader, following the 9/11 attacks, and in 2010 authorities stripped the citizenship of Yassir al-Habib, a Shiite who stirred controversy in Kuwait with statements judged offensive toward Sunnis. During the Iraq-Iran War, some Kuwaiti Shiites had their citizenship revoked for alleged links to al-Dawaa. One of the Shiites convicted of planning bombings in the early 1980s was stripped of citizenship in 2011 after serving a jail sentence.

In May of this year, the Interior Ministry approached the Cabinet with a plan to revoke the citizenship of tens of Kuwaitis whom the ministry accuses of forging documents, holding dual citizenship or residing outside Kuwait since the Gulf War.

This method of intimidation has worried political activists. Lawyer and activist al-Hamidy al-Subaiye told Al-Monitor that the Cabinet’s decisions were unconstitutional. “If we do not challenge these decisions on the ground and in legal terms, the list will only get longer,” he said. So far, not all those stripped of citizenship have filed cases to challenge the Cabinet’s decrees. In November, Shammari will make an appeal to regain his citizenship. His lawyer, Subaiye, said the administrative court’s previous decision to not interfere is odd, considering the illegitimate grounds on which the revocation was based.

Given the high profiles of those thus far affected, it stands that all regime critics could effectively be targeted in the same way. Statelessness in these cases is also imposed on the families of the figures, blocking their access to health care, employment, education and, most important, official documents such as identification cards and passports. The “new Bedoon,” as some now call these people, are thus not able to leave the country even if they wanted to. Shammari has spoken to the media and in court about the consequences of the Cabinet's decision on his children, who might be expelled from university or lose their jobs.

The Kuwaiti opposition has repeatedly condemned the Cabinet's actions, calling them a “civil and social execution.” It, however, has thus far not mobilized street actions against the revocations. In June, the arrest of opposition leader Musallam al-Barrak for “insulting the judiciary” drew thousands to the streets, before he was released on bail. The opposition’s non-action against the revocations is giving legitimacy to the regime’s actions. Considering the impressive turnouts for past rallies, the opposition’s hesitation to confront this campaign likely reflects a fear of having some of their core members targeted in the same manner. In its vulnerable position from outside the parliament, the opposition does not seem capable of countering the current crackdown.