Kuwait is tightening control of online critics of the royal family with a new telecommunications law. 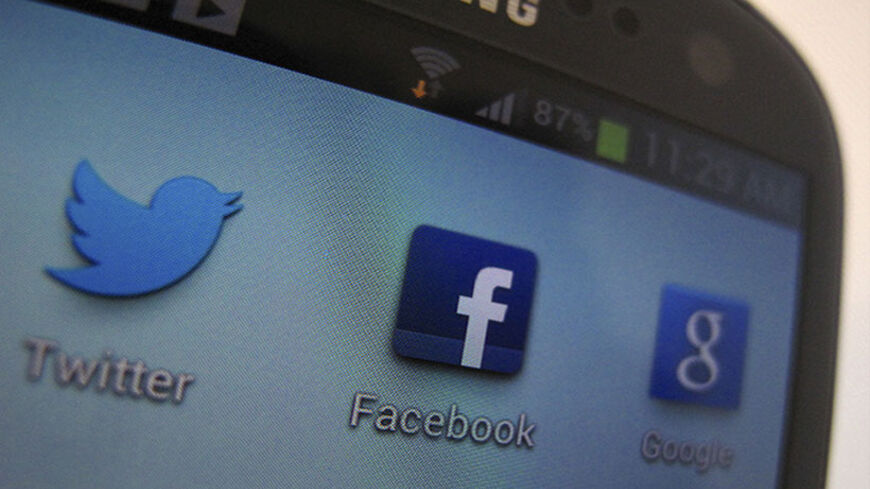 Kuwait has moved to regulate the use of social media as part of a continued crackdown against critics of the regime. In April, Minister of State Affairs Mohammed Mubarak al-Sabah announced plans to issue a special law concerning social media. Shortly before his announcement, parliament approved a draft of a new telecommunications law that puts a special committee in charge of “regulating the sectors of telecommunications and information technology to grant the best standards of quality and rates for consumers.”

The proposed law has already come under fire from political groups and activists who criticize it as intentionally ambiguous, granting authorities the power to block websites, monitor phone calls and terminate phone lines for "security reasons." In a public talk organized by the Kuwaiti Progressive Front, lawyer Hussain al-Abdullah said the law allows the telecommunications committee to make decisions to monitor and block without legal permission. He added that security reasons are used as a broad excuse to bypass constitutional restrictions protecting individual rights to free speech and privacy.

Similarly, lawyer al-Hmaidi al-Subaiye said the new law potentially punishes Twitter users with a year in jail for a tweet, and with three years for retweeting. He also claimed that the law gives power to the committee to issue warrants for house searches without a prior legal order. The Umbrella for Kuwait Action (UKA) was the first of local nongovernmental organizations to issue a statement criticizing the proposed law, calling it “part of a general policy to control and silence voices” marking a “worrying retreat in freedoms.”

This outcry comes following the suspension of two local newspapers for two weeks in violation of an order from the public prosecutor to stop publishing any information surrounding the "video tape" controversy. The vaguely named incident refers to a tape submitted by ruling family member and former Minister Sheikh Ahmed al-Fahad, who claims it is evidence to a coup plot planned by former Prime Minister Nasser al-Mohammed and former parliament head Jassim al-Khrafi.

The undersecretary of the Ministry of Communications, Hamid al-Qattan, however, denied all these accusations. In a press conference, he said that he was one of those who drafted the law, and that they do not intend to make any blocking or monitoring decisions without the necessary legal procedures. Qattan explained, “We are only a regulating body. Our job does not target any freedoms.” Yet he did not express any will to amend the controversial parts of the law, nor did he promise to address the concerns raised regarding the ambiguous phrasing of the problematic articles.

Shortly after, liberal member of parliament Rakan al-Nusf submitted a number of amendments for parliament to include before approving the law. Important additions suggested by Nusf included clear statements prohibiting censorship and violations of privacy rights. The additions are pending approval by a parliamentary committee before being added to the finalized version of the law.

Subaiye commented to Al-Monitor, “The undersecretary is not telling the truth. There are members of parliament who have also admitted the faults in this proposed law. We promise to take the case to the constitutional court if the necessary changes are not made before the final approval.”

For over five years, cases of political persecution have been increasing in Kuwait for "threatening national security," "organizing illegal protests" and "insulting the emir." The last crime was the basis for many cases against Twitter users, activists and politicians. Earlier this year, Mohammed Eid al-Ajmi was sentenced to five years in jail for tweets critical of Emir Sabah IV Al-Ahmad Al-Jaber Al-Sabah. Another Twitter user, Saqer al-Hashah, was arrested for the same reason but released in February. Only a few weeks ago, journalist Ayyad al-Harbi was sentenced to two years in jail on the same charges. Meanwhile, stateless activist Abdullah Atallah has been in jail since February as his trial continues to be postponed. Atallah is accused of insulting the emir in a speech during a demonstration organized by the stateless community marking the fourth anniversary of protests over their treatment.

In 2012, following mass protests against the amendment of the electoral law, the emir issued a decree to punish those who threaten national unity with up to seven years in jail and a fine of 10,000 dinars ($35,000). In December 2013, Kuwait’s constitutional court ruled against activists and lawyers who had made the case to omit Article 25, which criminalizes criticism of the emir.

The new telecommunications law gives another reason for the opposition to criticize the current parliament for its passive attitude toward authorities and lack of transparency. Last April, five members of parliament resigned following the blocking of their request to grill Prime Minister Sheikh Jaber al-Mubarak al-Sabah over issues of corruption and housing. Later this month, Kuwait will hold by-elections to fill the places of the resigned parliamentarians.

The upcoming elections are to be boycotted by the opposition in protest of the 2012 decree amending the electoral law. The amended electoral law sought to limit the power of political groups following the opposition’s victory in the February 2012 elections. This change has made it possible for marginal and new names to secure seats in parliament in the past two elections.

The growing local activism, performing more consistently than the opposition itself, has become a source of anxiety for the state. In 2009, former Prime Minister Mohammed was the most targeted official for the opposition for his acts of corruption. Yet, since Mohammed’s resignation, the emir took a more active political role. The demands for structural changes to grant more power to parliament over the cabinet are seen as a threat to an existing monopoly. By limiting parliament and legislating restrictive laws such as the new telecommunication law, the regime is showing its unwillingness to offer any compromise.