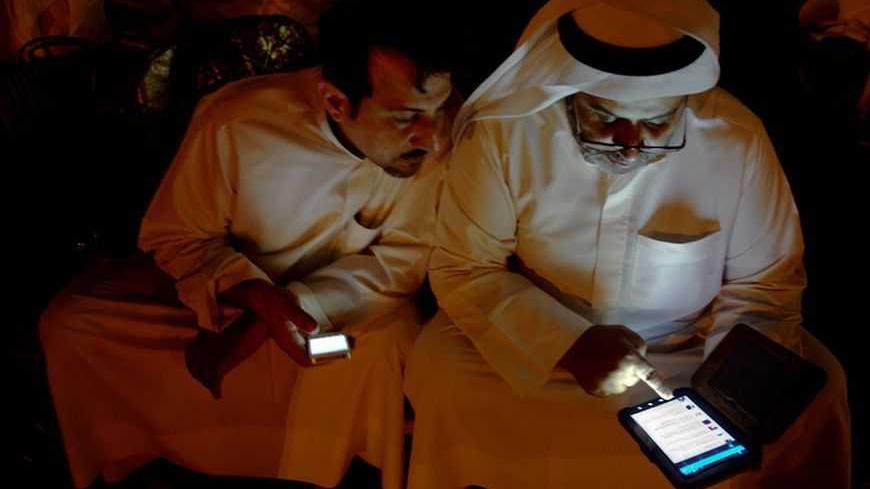 Kuwaiti citizen Raken Subaiya checks his Twitter feed on his phone as Yousef al-Anazi looks on during a sit-in protest in front of the Justice Palace in Kuwait City in 2012. - REUTERS/Stephanie McGehee

Two years after the start of the Arab Spring, the political battle in Kuwait is growing increasingly more tense over Twitter. At the current rate, Kuwait will soon be able to compete with neighboring Bahrain in the number of prosecutions brought against Twitter users. Within weeks of the February 2011 uprising, Bahrain had arrested large numbers of people using Twitter and Facebook to spread their messages. Meanwhile, Kuwaiti authorities also apparently decided to intimidate their critics and others through the arrest and trolling of influential Twitter users. In addition, tens of protesters have been arrested during the opposition’s dignity marches and in demonstrations by the country’s stateless community. The government, it seems, is no longer interested in defending Kuwait's reputation as the ‘most democratic’ state in the Gulf.

A few days before President Hosni Mubarak was toppled in Egypt, the Kuwaiti Interior Ministry made its first move against online free speech by summoning and interrogating Twitter user Mishari Buyabis. While in detention, officials questioned him about his political support for Ahmed al-Saadon, the head of the opposition. The incident stirred emotions of anger and was controversial enough to push parliamentarians into a confrontation with the government. Since then, Buyabis has become a public figure, appearing as a guest on TV shows and being paid by corporations for his posts.

In a sign of rising sectarian tensions, the Kuwaiti government launched a series of Twitter- and religion-related arrests shortly after the uprisings in Bahrain and Syria erupted. The first case was in June 2011 against Nasser Abul, a Shiite Twitter user and supporter of the Bahraini uprising. Abul faced charges of contempt for insulting Sunni beliefs and the Bahraini and Saudi royal families. In September 2011, a judge found him guilty of contempt, but ordered him released for time served.

Mubarak al-Bathali, a controversial al-Qaeda supporter who targets Shiites in his tweets, was the focus of another case. He was sentenced initially to three years in jail for insulting Shiites with his tweets, but his imprisonment was shortened first to nine months, then three months, and eventually to one-week following an appeal. Last December, al-Bathali tried to run in the parliamentary elections being boycotted by the Sunni-Islamist opposition, asserting that he could not let the parliament be dominated by Shiites. The election commission rejected his bid on the grounds that constitutional regulations bar candidates with criminal convictions.

Another case involving religion and sectarianism was brought against Hamad al-Naqi, a Shiite Twitter user. Al-Naqi and Abul, unlike al-Bathali, denied writing the tweets for which they were tried, claiming instead that their accounts had been hacked. Al-Naqi was sentenced to ten years in jail for insulting Islam and Gulf state rulers. His case was the most controversial and stirred anger among the Sunni majority. Some of his tweets insulted the Prophet and Aisha, one of Mohammed’s wives. The Shiite minority suspected that al-Naqi had been targeted because of his sect and believed his story about being hacked. Sunnis reacted, however, by seeking passage of a blasphemy law, with a sentence of death, for insulting God and Mohammed as well as the Prophet’s wives and companions. The parliament, at the time under Islamist and conservative control, passed the proposed measure. The emir, Sheikh Sabah al-Ahmed al-Sabah, however, used his constitutional authority to block the law, asserting that it violated the constitution, which protects freedom of religion, and discriminated against Shiite beliefs.

In July 2012, a Twitter account under the name Mohammed al-Juwaihel was used to insult the Mutair tribe. Al-Juwaihel, an MP elected in February 2012, has long been a controversial figure because of his statements against Kuwaiti tribes and the stateless community, accusing them of being disloyal and agents for Saudi Arabia or other states. It was during his election campaign that al-Juwaihel insulted the Mutair, who responded by setting his campaign office ablaze. Some attributed this run-in to al-Juwaihel’s victory, because Kuwaiti “urbans” felt intimidated by the growing power of the tribes.

Responding to the tweets about the Mutair, the emir’s office issued a statement condemning the insults and promising accountability. As many expected, al-Juwaihel denied any connection to the Twitter account although it had been active for months, and he had made no effort to dissociate himself from it. That the emir commented within hours, and about a clash irrelevant to the state, caught many by surprise and demonstrated the power of Twitter.

The animosity between al-Juwaihel and the Mutair is the clearest example of the current sociopolitical clash between the Kuwaiti urbans and the tribes. The former have dominated the state but now feel anxious about the power wielded by the opposition led by Mutair frontmen Musalam al-Barrak and Obaid al-Wasmi. Last October, al-Barrak was arrested for insulting the emir in a speech he gave at an opposition rally. He was released a couple of days later, following large protests demanding his release.

The earliest case against an online user for insulting the emir was made against Lawrence al-Rishidi, who was sentenced to ten years for defamation, advocating the overthrow of the regime and possessing a shotgun without a permit. The charges stemmed from poems posted by al-Rishidi on YouTube. The Kuwaiti media made passing reference to the verdict, but failed to provide details about the case or the poems. Another long sentence was handed down against Nasser al-Ansari, who was sentenced in February 2012 to five years in jail for tweets critical of the emir. Following an appeal, he was released in January 2013 after serving one year of his sentence.

In March 2012, seven Twitter users were arrested for the hashtag #Battery. The name was interpreted as referring to the emir, who wears a pacemaker. The users are politically active and waiting for a court date to learn about their possible sentences. Thus far among the seven users, only Rashed al-Enizi has been sentenced, to two years in jail, for tweets under the hashtag.

In November, six Twitter users were summoned for interrogation on suspicion of insulting the emir, misusing cellphones and participating in the opposition dignity marches. The move marked the first political arrest of a woman in Kuwait since the Arab Spring began. Sara al-Drais, a 25-year-old, had written romantic novellas before getting involved in politics last year through the “democratic civil movement.” Another of the six, Ayaad al-Harbi, was sentenced to two years in jail on Jan. 6. The rest continue to await trials.

Two young male members of the ruling family were briefly detained because of tweets critical of the emir. They were released after a few days, and their case is no longer discussed.

With time, Kuwait is getting closer to becoming another Bahrain in terms of its policies toward those critical of the regime. Bahrain has been attacked for paying for western companies to target popular Twitter users, and Kuwait was recently rocked by a report published in al-Rai alleging that the government had agreed to pay $250 million to British companies for software to monitor Kuwaiti Twitter users.

During the past two years, a few anonymous Twitter users attracted attention by identifying themselves publicly as government agents. The most famous is a woman at @GucciaH who trolls and insults opposition MPs and Twitter users. Last July, she submitted a complaint against Mishaal al-Sabah, a member of the ruling family, for a column he had written in a local newspaper objecting to the constitutional restrictions on who can become emir. The sheikh was briefly detained but later released when opposition leaders criticized his arrest. GucciaH and others have operated as government agents in a number of cases to monitor tweets and call on government loyalists to troll those in opposition.

From the ongoing campaign against Twitter users in Kuwait, one can only conclude that the regime is no longer interested in allowing a range of different, and in particular, critical voices to speak up or engage in the political system. Having witnessed the rapid changes stemming from the recent uprisings, authorities have made their stand clear by oppressing their critics. Earlier, in 2011, being critical of the emir was a taboo that got two men five to ten years in jail, a sentence that failed to arouse public anger. As political tensions have grown, this taboo has lost the power to intimidate, and criticism of the highest authority has been normalized. The earliest Twitter cases were made against unknown users, but the latest ones have targeted well-known young political activists. The regime is no longer tolerant and is only interested in making every activist an example of the possible consequences of political activism.

Mona Kareem is the founder of BedoonRights.org and a graduate student in Binghamton, NewYork. She is a blogger, journalist and poet with two published collections of works. You can follow her blog at www.monakareem.blogspot.com.