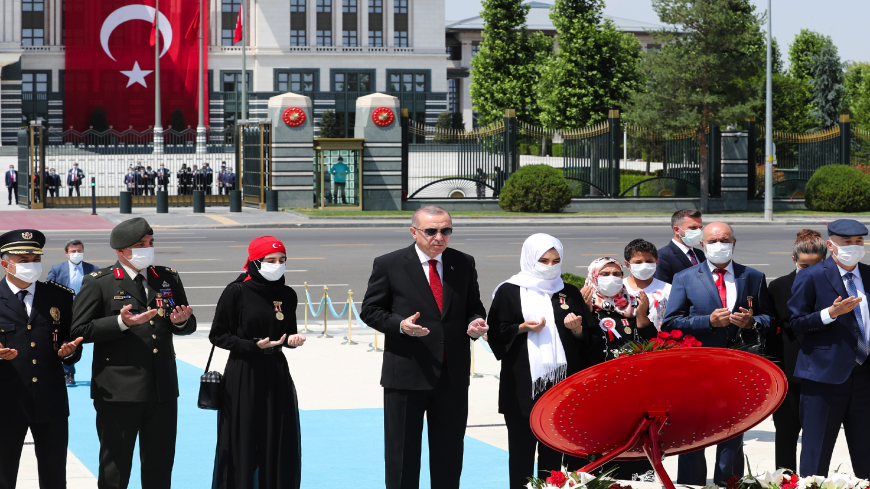 Turkish President Recep Tayyip Erdogan prays after laying a wrest of lowers in front of the July 15 Monument, in Ankara, on July 15, 2020, during the July 15 Democracy and National Unity Day's events held to mark the fourth anniversary of the failed coup. - Turkey commemorates, the fourth anniversary of a coup attempt which was followed by a series of purges in the public sector. - ADEM ALTAN/AFP via Getty Images

Speaking in Ankara, Erdogan outlined an 11-point plan to be implemented over a two-year period with aims to improve the nation’s judicial system and penal code and allow for more freedom of expression in the country.

“The main determinants in drawing up Turkey's human rights action plan were the needs and demands of the people,” Erdogan said.

“The ultimate goal of Turkey's action plan is a new civilian constitution,” the Turkish leader later added, referencing talks in Ankara regarding the possible drafting of a new constitution.

Under the reforms, Erdogan said his ruling Justice and Development Party (AKP) government would seek to strengthen individuals’ rights to a fair trial while laying out economic and business-related measures that would fortify property rights and bolster investment conditions in the country. New measures would also be introduced to improve investigations and judicial proceedings in cases involving violence against women.

In addition, the Turkish leader touched on faith-based freedoms for non-Muslim communities, saying public and private sector employees and students would be permitted time off to observe religious holidays. Laws overseeing the establishment and leadership of non-Muslim community associations would also be revised to enhance religious freedoms, Erdogan said.

Human rights advocates said the proposals could foster progressive changes in Turkey’s judicial system, but they noted the planned reforms lacked details and their implementation would need to be closely monitored.

“The proof of these lofty statements will be in the pudding,” Milena Buyum, Turkey Campaigner for Amnesty International, told Al-Monitor.

Over the last decade, Buyum said the AKP oversaw a broad rollback of individual freedoms in Turkey, a trend that accelerated following a 2016 coup attempt that has since led to the imprisonment of many government critics for expressing their views in public or on social media.

She added the reforms would fall short of their goals without concrete steps to reestablish an independent judiciary that applies rulings impartially and implements decisions by the European Court of Human Rights (ECHR), such as the court’s repeated calls for the release of high-profile political prisoners.

“If this is truly a start of a normalization process, it would be demonstrated with the immediate implementation of the ECHR rulings on Selahattin Demirtas and Osman Kavala by releasing them from pretrial detention,” Buyum said, referring to the former co-chair of the pro-Kurdish Peoples’ Democratic Party and Turkish philanthropist, respectively.

In his speech, Erdogan also said free speech rights would be improved for Turkish media professionals, many of whom have come under increasing pressure in recent years as the nation became one of the world’s top jailers of journalists. Turkey’s anti-terrorism laws have often been applied in cases involving journalists, and their broad application has long been condemned by free speech advocates.

Sinem Adar, an associate at the Center for Applied Turkey Studies in the German Institute for International and Security Affairs, said she remained apprehensive over the human rights plan after its initial unveiling lacked reforms to the nation’s anti-terrorism laws.

"I would have been more convinced if there were specific reform points about certain legislation in the penal code — for instance, regarding insulting the president, insulting the Turkish nation and of course those concerning terrorism charges,” Adar told Al-Monitor.

Adar also noted the plan would establish a number of human rights commissions that could offer new avenues for political influence in the legal system.

“It’s best to work with the assumption this is a government that’s willing to do whatever it takes to stay in power,” Adar told Al-Monitor. “Any change they bring in should be interpreted along those lines.”

Among other reforms, Erdogan said work would begin to revise laws overseeing political parties and elections without elaborating further. The news comes amid increasing calls from Erdogan’s nationalist allies to shut down the HDP over suspected links to terror organizations.