Despite its predictions and aspirations, Turkey has lost what grip it had on many of today's political and military conflicts, to the amusement and satisfaction of many in the region. 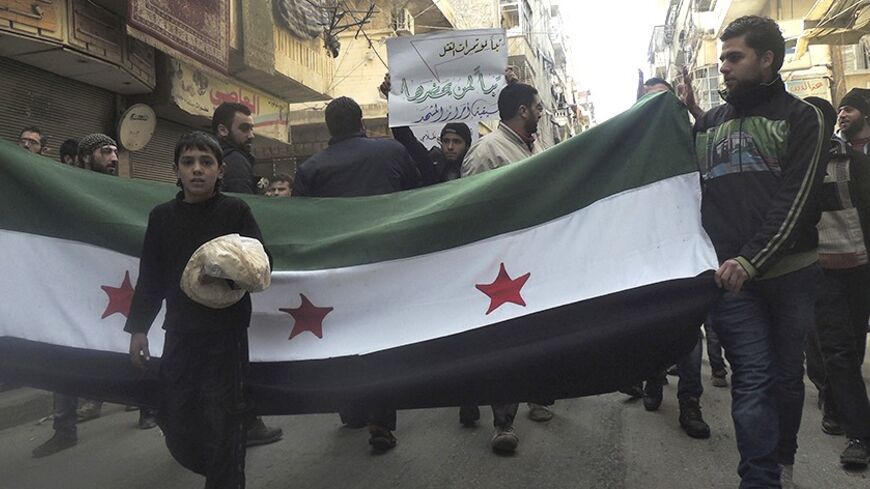 A boy holds bread as he walks in front of the Syrian opposition flag during a protest against Syria's President Bashar al-Assad and fighters from the Islamic State of Iraq and al-Sham (ISIS), Aleppo, Jan. 10, 2014. - REUTERS/Hosam Katan

Turkish Foreign Minister Ahmet Davutoglu has rarely been correct in his predictions about Syria. Just about every plan and expectation he had for this country has gone awry in ways he never factored in. Some of his assessments about the current situation appear equally questionable. For example, he is saying now that Turkey's new bane in northern Syria, the Islamic State of Iraq and al-Sham (ISIS), is in league with the regime of President Bashar al-Assad.

In a rare admission that things are not going according to his expectations, Davutoglu now acknowledges, albeit indirectly, that the activities of radical Islamists in Syria are making Assad the lesser evil for the international community. This stands in stark contrast with his predictions less than two years ago that Assad had only months, if not weeks, to go.

For Davutoglu, the situation in Syria was simply about a ruthless dictator killing his own people. He never considered the possibility that this crisis had the makings of a civil war, not unlike the one in the former Yugoslavia. Davutoglu’s assumptions were based on the notion that in time, the Syrian regime would fall just like those in Tunisia, Egypt and Libya and be replaced with an elected government.

In hindsight, that all looks like wishful thinking. Such assumptions also appear seriously off the mark for someone who should have been better informed about the demographic structure of Syria and the depth of the sectarian fault lines in the country.

Being an academic versed in international relations, Davutoglu should also have had a better focus on which global and regional powers would support Assad.

The situation in Syria also undermines Davutoglu’s claim made on a number of occasions that Turkey understands the region better than most for historic and cultural reasons. This does not appear to be the case from today’s vantage. At any rate, not everyone in the region welcomes such remarks, seeing in them neo-Ottoman ambitions.

Assad is therefore not the only Middle Eastern leader who must be looking with some satisfaction at the corruption scandals and political difficulties the government of Prime Minister Recep Tayyip Erdogan is embroiled in presently. And there is no love lost for Erdogan on some Arab streets, of course.

The number of governments that want less involvement by Turkey in the region, however, has increased, especially after Erdogan revealed his sympathy for the Muslim Brotherhood and pursued policies reflecting sectarian biases. Turkey is trying to work itself out of this corner now by courting Baghdad and leading Shiite figures in Iraq — not to mention Iran — but regaining confidence will take time.

The bottom line for Erdogan and Davutoglu is that Assad remains in power, despite all efforts to oust him by military means. Not only has he survived thus far, but he has also worked himself to the settlement table. Erdogan and Davutoglu are loath to see this, having built their expectations on Assad’s demise. Given the troubles Erdogan faces at home, however, perhaps Assad believes he might even outlive him politically.

All of this is a far cry from Davutoglu’s claim that a day will come when not a leaf will move in the region without Ankara’s approval. “The greatness of a nation is measured by the geography it spreads across, as well as the values it spreads. No one has the right to limit this horizon and geography,” Davutoglu said during an address at a conference in the industrial city of Kocaeli in May.

“If this restoration succeeds as it should, then a leaf cannot move in this geography or in the world without the will of our people,” he added, overlooking the fact that many leaves were already moving in the Middle East at that stage with no input from Turkey. Such remarks were widely met with ridicule among Turks, who see that Turkey has more adversaries and rivals in its region now than in the past.

Meanwhile, aware of the difficulties Turkey is facing in Syria today, Davutoglu seems to have decided on Erdogan’s tactic of finding unlikely causes for some of them. The most urgent problem for Turkey in Syria at the moment is ISIS, which is trying to entrench itself in northern Syria and in Iraq’s Anbar province.

Ankara, it is rumored in diplomatic circles, is currently working with elements close to “moderate” Salafists in the region operating under the banner of the Islamic Front, a Saudi-backed anti-Assad coalition of diverse groups, which is also fighting ISIS for control over northern Syria.

The mysterious truck halted by police in Turkey as it headed for the Syrian border, but which was not allowed to be searched by the government, is thought by many to have contained military equipment for one such group — possibly Syrian Turkmen, judging by remarks from government officials.

The government nevertheless continues to reject accusations by the Assad regime that it is arming Islamic terrorists in Syria — a claim Damascus has also taken to the UN Security Council. In an exclusive interview on Jan. 9 with the semi-official Anadolu News Agency, Davutoglu said these claims were part of a “psychological onslaught against Turkey,” and tried to turn the tables on ISIS and Assad.

“ISIS emerged on the scene and started fighting opposition forces just when the opposition in northern Syria grew strong. There is a partnership behind the curtains between them and the regime. The regime points at these groups and says ‘There is terrorism,’ thus legitimizing itself.” Davutoglu said.

He added that the methods employed by some radical groups were also making Assad seem the lesser evil for a public increasingly fed up with these groups. There is indirect acknowledgment in this remark that Assad is regaining some legitimacy thanks to jihadist groups, which are of grave concern to the West, too.

Discussions with diplomats indicate that the West is also not so sure about some of the groups operating under the Islamic Front, which Ankara is said to be backing, together with Saudi Arabia. An increasingly wary Turkish public is wondering how Turkey will extricate itself from embroilment with these groups in Syria.

Meanwhile, Assad’s compliance with the Russian-brokered plan for his chemical weapons stockpiles has also earned him praise from some Western officials, much to Erdogan and Davutoglu’s annoyance, of course. Ankara, however, has few options left on Syria today other than going with the flow of events it has little or no control over.

On the other hand, the rationale behind some of the arguments coming out of Ankara when faced with undesirable developments in the region does not contribute much to shoring up Turkey’s wavering credibility.