Turkey rebuilds ties to Iran and Iraq and faces the realization that Syrian President Bashar al-Assad will likely be part of the transition in Syria. 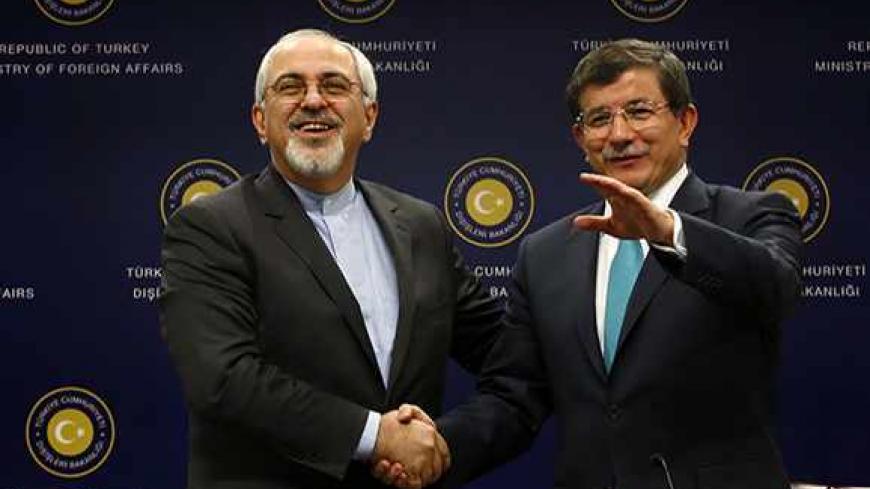 The chaos borne out of the Arab Spring is spawning a new pragmatism in the Middle East and also is forcing Turkey to return to its “zero problems with neighbors” policy by trying to mend fences with regional countries it has been at odds with.

Recent overtures between Ankara and Baghdad, coming after a prolonged period of personal animosity between Prime Ministers Recep Tayyip Erdogan and Nouri al-Maliki, provide evidence of this. Turkey’s strained ties with Iran are also moving in a similar direction.

Syria and Tehran’s disapproval of NATO-related steps by Turkey to enhance its anti-missile defenses resulted in tensions, ensuring bilateral dialogue on regional issues remained unproductive. A return to a friendlier atmosphere was evident during Iranian Foreign Minister Javad Zarif’s visit to Turkey on Nov. 1.

He was in Istanbul to attend the “Sixtieth Pugwash Conference on Science and World Security,” which met under the telling title of “Dialogue, Disarmament, and Regional and Global Security.” Delivering the keynote address, Turkish President Abdullah Gul took time to welcome Zarif and praised the new dialogue between Tehran and Washington. He characterized this as a “long-desired development.”

The same day, Zarif traveled to Ankara for talks with his Turkish counterpart Ahmet Davutoglu, and while there was also received by Erdogan. Addressing a joint news conference with Zarif after their official talks, Davutoglu announced that Turkey and Iran were ready to defuse ethnic and sectarian tensions in the Middle East.

He also signaled that the Syrian issue, over which the two countries have serious disagreements, would not be allowed to spoil ties. While differences on this issue remain, Davutoglu indicated that the sides agreed on three basic points with regard to the crisis.

The first, he said, is the need to extend humanitarian aid without discrimination to all Syrian parties in the conflict. The second is the need to urgently start the transition in Syria and therefore hold the Geneva II conference, not only to secure peace but to also preserve the country’s territorial integrity. The third point, Davutoglu said, is to support free elections in Syria after the modalities ending the Assad period are determined.

Davutoglu’s remarks represent a climbing down by Ankara from its previous hard-line policies, which looked on the Geneva process with great suspicion as it technically includes Assad. Turkey seems to be facing up to the fact that the political transition period in Syria will somehow involve Assad.

Davutoglu also announced that he would travel to Tehran on Nov. 25-26, and Erdogan would visit Tehran in January. He said Turkey hoped to host Iranian President Hassan Rouhani in Ankara in December. This high-level diplomatic traffic is clearly designed to maintain the positive momentum in political ties and could form the basis of a new phase of productive cooperation.

As former Ambassador Clovis Maksoud said in his Nov. 3 piece for Al-Monitor, “It appears that these two important regional powers realize the possible dangers of an unresolved civil war in Syria.” It is worth remembering — as a side note — that a similar spate of diplomatic visits is also planned between Turkey and Iraq for the coming weeks and months.

While Turkey and Iran were warming up ties, Maliki was in Washington. He was warning the Obama administration against the growing threat to Iraq and the region from al-Qaeda-affiliated groups and seeking US military hardware to combat this. Officials in Ankara noted with satisfaction that Maliki was warned in turn to be less sectarian and more inclusive in treating the once-ruling Sunni minority.

Turkey’s support of that minority had started the tensions between the two countries. Tensions peaked when Ankara gave asylum to Iraqi Vice President Tariq al-Hashemi, a prominent Sunni politician who was charged with setting up anti-Shiite death squads and given the death penalty by a court in Baghdad. Turkey and Iraq appear ready to let these issues rest now.

The real threat for the regimes in the region today comes increasingly from al-Qaeda and its offshoots. These continue to turn Iraq and Syria into a bloodbath and are seen to be gaining strength by using the chaos in Syria. They declare their intentions openly and say their aim is to destroy the current order and set up regimes that will govern strictly according to Sharia.

In an interview with The Guardian on Nov. 3, Gul also warned against this threat. “I don't think anybody would tolerate the presence of something like Afghanistan on the shores of the Mediterranean,” he said.

The growing instability in the Middle East — with Syria on the one hand and Iraq and Egypt on the other — is also making the continuation of strategic ties with the United States vital for countries such as Turkey, Iraq and Saudi Arabia. Some analysts say it is also nudging Washington and Tehran toward a new collaboration.

Meanwhile, Russia and the United States continue to cooperate over Syria and are pushing for the Geneva II conference. The Syrian case shows that these superpowers are the prime movers that can influence the course of events in the region. Neither is doing this today as “imposing outside powers,” but they are working with regional powers.

Tellingly, the current tension between the United States and Saudi Arabia is not over too much US interference, but too little. Riyadh is annoyed, for example, that the United States decided against bombing Assad and also refused to arm the Syrian opposition.

As for the reliance of some in the region on Russia, this was evident in Tehran’s conflict with the West over the nuclear issue, and is evident now in Syria where Assad has managed to remain standing thanks to Moscow’s political and military support.

Ankara has few choices left in this environment, other than to stop rowing against the current and try and patch up differences with countries in the region to make its political presence felt as the new Middle East takes shape.

There is more than one complicating factor in all this for Erdogan, of course. His original vision involved a Turkey that plays a leading role in the Middle East.

But gone are the days when Davutoglu was boasting that Turkey was the game setter in the Middle East and arguing that a leaf could not move in the region without Ankara’s consent.

Time has proved that Turkey and governments in the region do not necessarily see eye to eye on what should happen in the Middle East. Meanwhile, the Arab Spring has thus far resulted in more chaos than democracy and respect for human rights. In Syria, Iraq and Egypt, the Erdogan government is finding that it has to return to pragmatic policies, away from those based on ideology.

Ankara has to also deal with a host of new security threats as a result of the Syrian crisis and the general turmoil in the region. These range from a flood of refugees to the destabilizing activities of al-Qaeda-affiliated groups that have been flitting back and forth across the porous 900-kilometer (560-mile) border between Syria and Turkey. The chemical weapons threat has to be added to this.

Erdogan is more than aware that Turks have zero appetite for being drawn into the Middle East’s deadly and seemingly intractable disputes. He has to take this seriously, because local, presidential and general elections are not far off.

This is why he has to also be more pragmatic in foreign policy. Some diplomatic sources maintain that the new sense of pragmatism could also spread to currently almost nonexistent Turkish-Israeli ties. If that happens, it will mean the “zero problems” policy is on track.